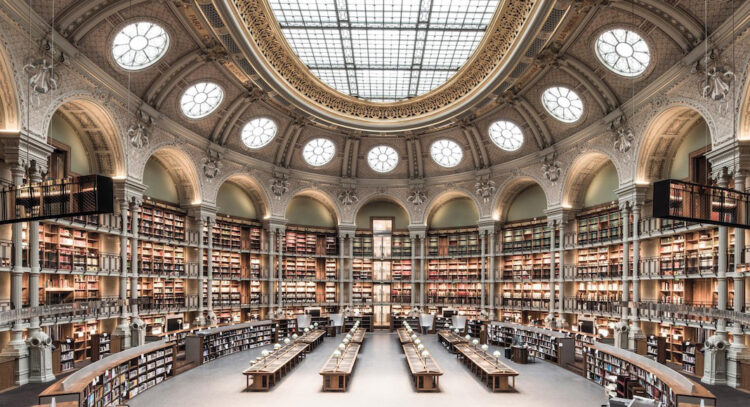 La Bibliothèque Nationale Richelieu, the main building of the National Library of France, has reopened after a 12-year renovation, which cost the country more than €250 million. The library dates back to 1368, when King Charles V installed his personal book collection in the Louvre, one which later grew to 900 volumes. Starting in 1537, under King Francis I, printers and booksellers were required to provide the king with copies of any books for sale on the public market. But it was under Colbert in 1666 that a formal library was founded. An official king’s librarian was appointed in 1719, and by the end of the 18th century the library had become a place for the nation’s intellectual elite (including Voltaire and Rousseau) to meet and research. The public library only grew after the French Revolution, when rare texts were seized from the nation’s nobility, and during the Napoleonic Wars, when France pillaged neighboring countries like Belgium, Germany, and Italy for their riches, books among them.

The library in its current form is divided between several campuses, including the ultra-modern François Mitterrand library, and the historic 18th century Richelieu library, which was closed in 2011 for renovations and reopened in September of this year.

The Richelieu Library contains the National Library research rooms: the Department of Manuscripts; Prints and Photography; Coins, Medals and Antiques; Performing Arts; Music. It also houses the Library of the National Institute for Art History and the Library of the École nationale des Chartes, as well as the stunning reading room called the Salle Ovale, a kind of real-life Beauty and the Beast library. Finally, of course, there is the BnF museum, which houses 900 treasures from Antiquity through the present day. Which might seem like a lot, until you realize that the museum is pulling from archives of 40 million treasures.

So what exactly is on display at the BnF? To start with, given that it is, of course, a library, there is obviously an abundance of manuscripts of historical significance. Original manuscripts of Victor Hugo’s Les Misérables and The Hunchback of Notre Dame. Simone de Beauvoir’s The Second Sex. A copy of Marcel Proust’s In Search of Lost Time, marked up with the writer’s edits and musings pre-publication. All this surrounded by stunning works of art, like the painted ceiling of the Mazarin Gallery inspired by Ovid’s “Metamorphosis,” original prints from Rembrandt and Picasso, and genuine Matisse engravings.

But some of the library’s items are a little more unusual. In the Salon d’honneur inside the Rue Richelieu entrance, sits a small statue of Voltaire by Jean-Antoine Houdon. This statue actually contains Voltaire’s heart, separated long ago from his body, which lies entombed in the Panthéon.

Tickets for the museum are €10 each, €8 for reduced entry. Museum entry coupled with an exhibition costs €13. However, those wishing to enjoy the Salle Ovale can do so free of charge, and the reading room is equipped with interactive screens, child-friendly accommodations, and access to 20,000 works. Rose Bakery, the local baked goods empire run by French-British couple Jean-Charles and Rose Carrarini, has opened a small cafe on the ground floor, and a garden outside the Rue Vivienne entrance has been planted with trees usually reserved for paper production, a nod to the life cycle of the books inside.

A trip to the BnF is a necessary pilgrimage for any lover of literature, particularly French literature. Because what could be more entrancing than spending an afternoon with Proust, de Beauvoir, and Voltaire, at their most intimate?