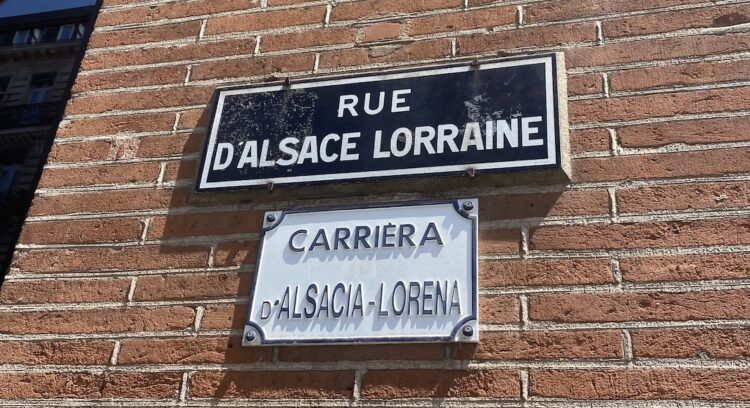 On a recent two-month road trip through France, I prepared to square off against unexpected accents and regional slang as I made my way through unknown parts of the country. But as I dragged my suitcase with its one broken wheel through the cobblestoned streets of Lyon, Lille, and Aix-en-Provence, I was surprised to find hints of deeper language differences, literally at every corner. In many of these cities, the blue street signs placed high on stone walls appeared in double: One in French, and one in a local language. In Toulouse, Rue Vélane became the Occitan Carrièra de Na Velana. In Strasbourg, Place du Marché aux Cochons de Lait became the Alsatian Ferikelmärik.

When asked, however, no one seemed to speak these mysterious dialects, save for a few words sprinkled into the local jargon.

France is notoriously particular about its language, and has been for hundreds of years. In 1635 the Académie Française was founded by Cardinal Richelieu, under the reign of King Louis XIII. Its forty members, known as “immortals,” still control the rules of the French language, with a level of influence not seen elsewhere in the world. The Academy is responsible for publishing the official French language dictionary, and for formally approving (or refusing to approve) new words or variations on existing words.

But the French government currently recognizes several regional languages, including: Basque, Breton, Catalan, Corsican, Alsatian, Flemish, Francoprovençal, and Occitan. The recognition of these local languages is inseparable from a history of rebellion against centralized power in Paris, particularly from Occitanie, Brittany, Corsica, and the Pays Basque. 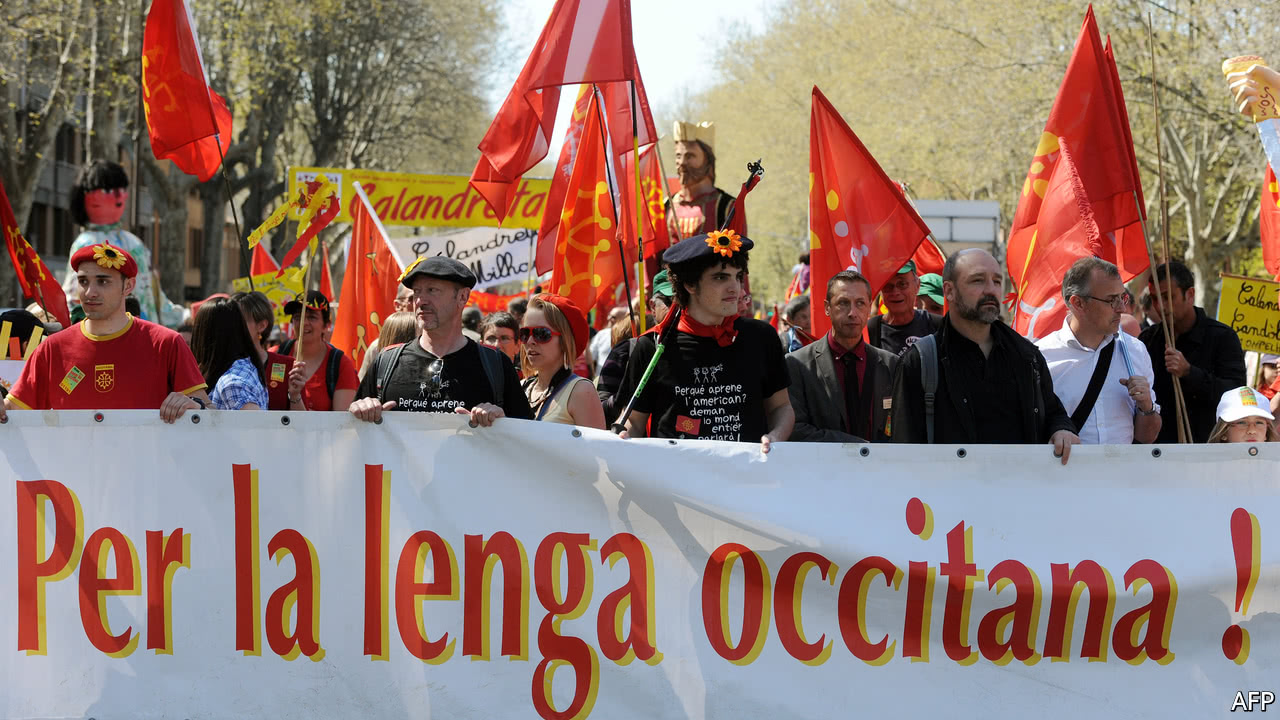 Occitanie, which stretches from Lourdes to Nîmes, covers much of the South of France bordering Spain, and includes the major cities of Toulouse and Montpellier. One of the strongest regional dialects in France, Occitan is still taught in some bilingual schools called Calandretas. But for the most part, it is spoken only by the oldest inhabitants of the region, and is likely to die out when they are gone. Variations of it can be found throughout the South of France, like in the Provençal of Aix-en-Provence (not to be confused with the separate dialect of Francoprovençal), or the Niçard of Nice. Occitan is also known as the “langue d’oc.” Oc in Occitan means “yes,” as opposed to oïl, the Renaissance-era version of oui. So Occitan was the langue d’oc, and French was once the langue d’oïl. (This explains the etymology of the Languedoc-Roussillon region, which is a part of Occitanie.) Occitanie’s proximity to Catalonia, physically and linguistically, means that Occitan and Catalan share some Latin roots, and are somewhat mutually comprehensible. But while Catalan has maintained a vibrant regional integrity in Spain, Occitan has dwindled over the last half millennium. It is unknown how many Occitan speakers exist today, with numbers ranging wildly from around 200,000, all the way to over 1.5 million.

Occitan began a long period of decline after the Edict of Villers-Cotterêts in 1539, which instituted Francien, the dialect of Northern France (i.e. Paris), as the official language of France. Increased literacy and access to written language over the course of the 17th and 18th centuries eventually saw the spread of Francien (what we now understand as Standard French) throughout the nation.

In the 1880s, the Jules Ferry laws were enacted, making public education in France free, secular, and mandatory. One of the consequences of this overarching educational reform was a push to eliminate patois, or any languages except Standard French. It became forbidden to speak languages like Occitan and Breton in schools, and offenders could be punished for speaking so much as a word in their mother tongue, such as by being forced to wear a pair of clogs or wooden hooves around their neck, a shameful symbol known as la vache.

Breton: the Celtic Language in France 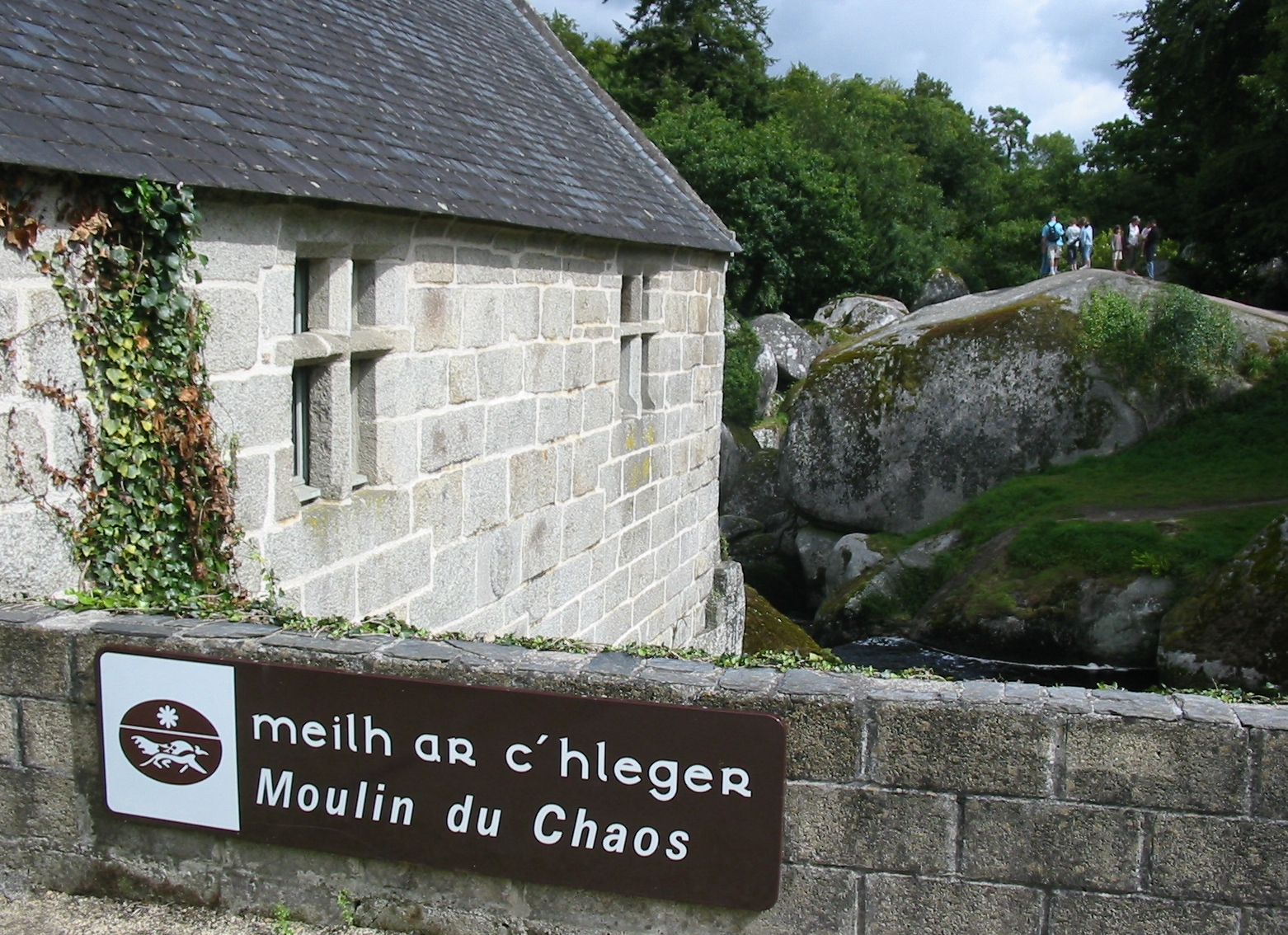 Breton, the language spoken in Brittany in Northwestern France, has a similar story to that of Occitan. Breton is a Celtic language most closely related to Cornish, which makes sense considering the region’s proximity to the United Kingdom. (Brittany, or Bretagne, in French, comes from the same word as Britain.) Today, around 200,000 people, or 5.5% of the region’s population, speak this forgotten dialect, which dates back to the 5th century. Like Occitan, it was pushed out of schools in the 1880s, with punishments doled out to offending students. The language did not return to schools in Brittany until the Deixonne Law of 1951, which allowed schools to teach Occitan, Breton, Catalan, and Basque, if they had the resources and wished to use them. In 1977, the Diwan schools were introduced in Brittany to provide bilingual French-Breton education to a few thousand students, and they have shown surprising educational prowess in the years since. Recently, in 2021, debates were held over the proposal of a bill nicknamed “Molac’s Law,” which would have allowed schools the option to teach the majority of lessons in regional languages, instead of French. That part of the bill was struck down by the French supreme court (Conseil Constitutionnel), under the justification that it would not have abided by the French constitution, which dictates French as the language of the Republic. 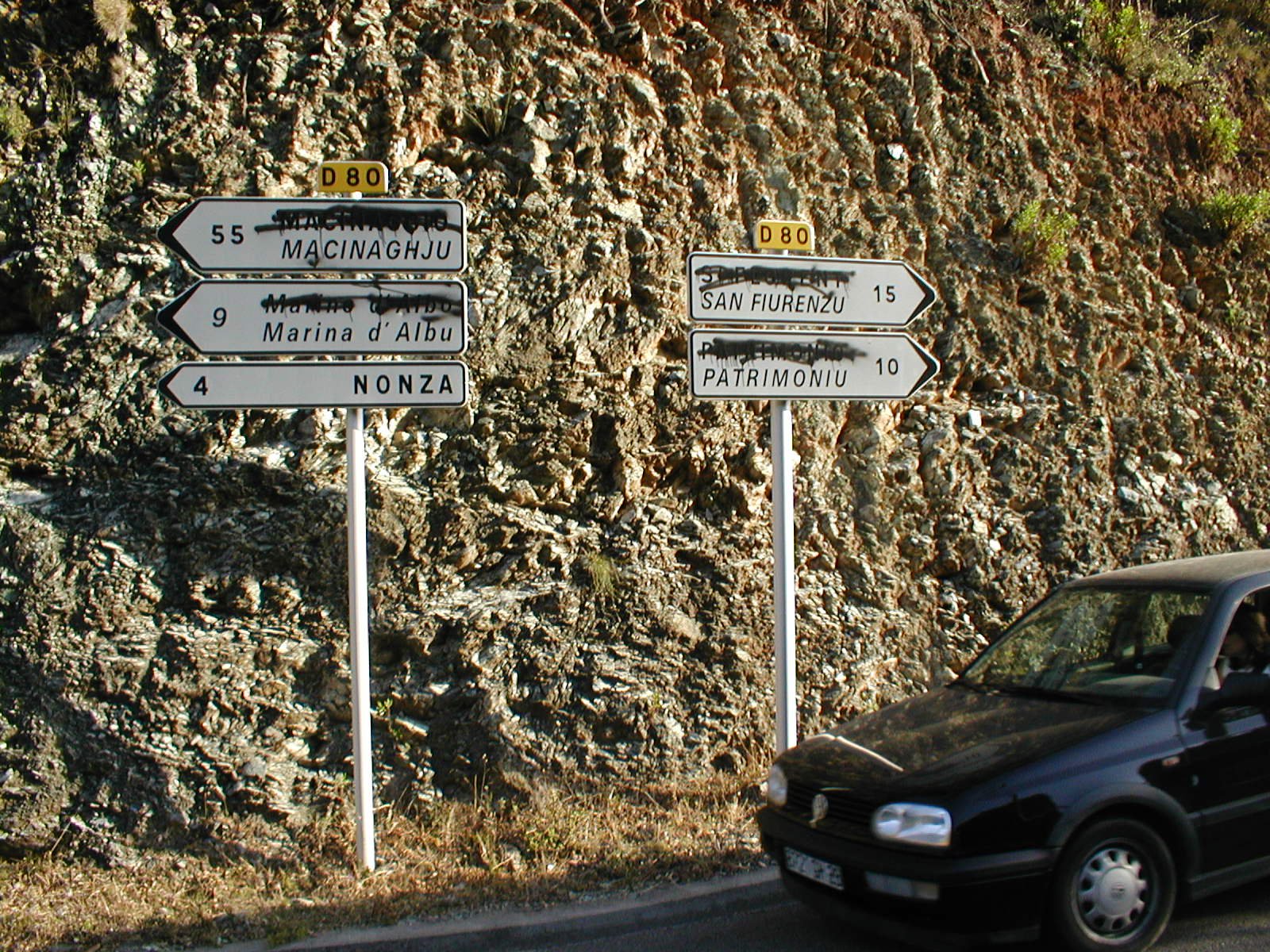 Corsica, an island located between France and Italy, is a French region with shifting loyalties. It was once part of various Italianate republics that pre-dated modern day Italy, then an independent republic, and finally a part of France. Its native language, Corsican or Corsu, is a Romance language that came to the island from Tuscany, though French later took over, and there are no monolingual Corsu speakers left. Corsican was left out of the Deixonne Law of 1951, and teaching of the language in schools wasn’t allowed until the 1970s. Following the dissolution of the French colonies, notably Algeria, in the 1960s, French colonizers who had been living abroad were repatriated to Corsica and given land by the French government. This sparked local outrage from an island already suffering economically. Nationalist subcultures like the FRC and ARC carried out terrorist attacks in the 1970s in protest of France’s apathetic treatment of the island and its population. The resurgence of an effort to teach Corsican to younger generations stemmed from this period of unrest, and a desire to reclaim Corsican culture following the forced assimilation of Corsica into France.

French remains one of the most-spoken languages in the world, largely among non-native speakers. But it has reached this position often at a human cost, spreading itself through colonization, repression, and rigorous standardization. The regional languages pushed out by Standard French each contain rich cultural heritages, many of which will soon be confined to obscure texts, and street signs whispering unpronounceable secrets into the wind. Though few are willing or able to put in the effort to learn these languages, they have become identity markers, badges of honor, symbols of rebellion against the central state. They live on in part out of spite, as a rejection of France’s demands for integration. Whether Breton, Basque, or Occitan, these languages carry the same message: we refuse to assimilate, and we refuse to forget.