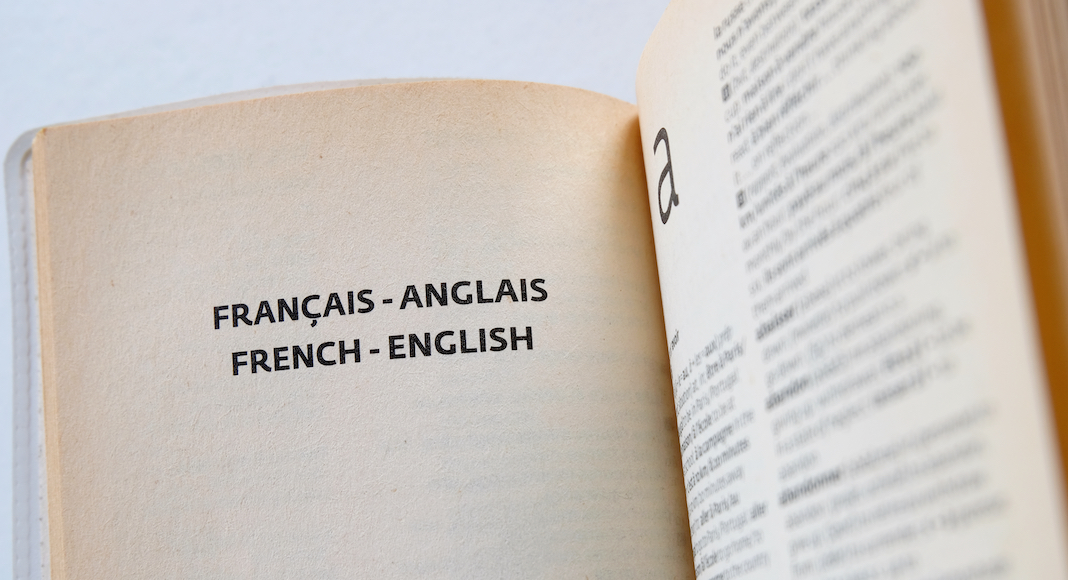 Can French Ever Be Truly Gender Neutral?

Over the last few years, many people have had to rethink the way they use language, and how that affects the people left out of it. English has famously seen a rise in the use of “they” (Merriam-Webster’s 2019 Word of the Year) as a singular third-person pronoun used for nonbinary people, rebranded as a new term, though it has been used in this fashion for centuries. But certain languages, Romance languages in particular, have a bit more trouble when it comes to making language inclusive, thanks to gendered “masculine” and “feminine” words, articles, and endings. French is a great language to use to explore the problems of the unique field of “gender neutral” linguistics.

Let’s break it down. In French, il is used for him, elle is used for her, and ils is used for any group of men and/or women. There is also the rarer elles, used to denote a group of entirely women. So 100 women would be elles, but 100 women and one man would be ils. It’s easy to see here where men seem to be built in as the default, but this is just the very tip of the iceberg.

“Reflections and practices to think about the representation of women have existed for more than fifty years. Language was very early on perceived as a crucial site by feminists,” explains Julie Abbou, a French linguist and expert in antisexism in linguistics.

Since the 1980s, feminists have waged war in France against exclusively masculine titles for various professions, from le policier to le ministre. Some, like policier, have been feminized (to la policière), while others, like le ministre, have not. Famously, when Ségolène Royal ran for president of France in 2007, debates were had over what her title would be if she won, since la présidente refers not to the president, but to the president’s wife, leaving her with the clumsy option of Madame le Président.

But though these discussions have been ongoing, and many new titles adopted, it took until 2019 for the Académie Française, the body which regulates the French language, to formally accept feminized job titles.

A post shared by AKA JORDAN TRIES TO DRAW (@nb.chicanx)

“The Académie Française… has the role of defending a conservative vision of language, which is the linguistic side of a broader political conservatism,” explains Abbou. “Thus, they intervene most of the time against evolutions, and only give in to these evolutions when their use is overwhelmingly in the majority.”

Following the rise of feminized job titles came the popularization of “inclusive writing,” a practice that includes masculine, feminine, and plural options when writing out nouns referring to people or groups of people, using a “median-period.” For example student(s) might be written as étudiant·e·s to cover both male and female students. But since adjectives must agree with nouns, these too must be spelled out. (Adding an “e” to the end of a noun or adjective often makes it feminine, though there are exceptions. “S” is used for plural endings, as it is in English.) So intelligent student(s) would become étudiant·e·s intelligent·e·s.Though currently in popular use, écriture inclusive is still not officially sanctioned by the Académie Française, and has been banned in French schools under the excuse that it is overcomplicated and a barrier to language learning.

Abbou claims that this style is not some new fad, but one rooted in historical usage. “The practices that are called ‘inclusive writing’ have actually existed for much longer than the term has been around. Their goals can be to make women visible, to have truly generic forms (not just masculine) to designate mixed groups, to abolish gender, or to represent new identities, such as non-binary identities.” But does inclusive writing really carve out a space for non-binary French and Francophone people?

Many have experimented with coming up with new gender-neutral pronouns in French, including: iel, ille, ol, al, ul, and yul. Of the lot, iel is by far the most commonly used, particularly in Quebec, where it was coined as a portmanteau of il and elle. But the issue of noun-adjective agreement remains. Inclusive writing cannot be translated into speech because of the change in pronunciation between masculine and feminine words, so someone using the pronoun iel would still have to choose between saying, for example, Je suis content, or Je suis contente, and those referring to them would also have to make a judgement call between saying Iel est content vs. Iel est contente. Job titles pose the same problem, forcing a decision between Iel est musicien and Iel est musicienne.

It adds an interesting dimension to the question of gender neutrality in language. Feminizing titles has made women more visible in the workplace, but it has also secured professional language in a binary. While it would be foolish to consider masculine nouns or groupings as any kind of “neutral” linguistic space, has feminization of titles and inclusive writing complicated things for non-binary French speakers? Not according to Abbou, who says, “We must not let ourselves be trapped by labels, and the important thing is to reflect and act on the way we name individuals to make them exist.”

There might not currently be a solution that includes everyone equally, and even if one were to appear, it might take decades to be officially recognized. But language will continue to evolve with society, as it always does, regardless of who is writing the dictionaries.

“Non-binary people challenge, in the first place, a social organization that divides individuals into males and females in a binary way. Language, and its two grammatical categories, is only one of the places where this social organization occurs. If we can think of a less binary distribution, it is because we are also able to name it,” Abbou says. “It is therefore not a question of satisfying demands or needs, but of imagining new ways of naming social categories. And as is often the case with language, this begins with tinkering… language is our means of access to the world. By circulating new linguistic forms, we see new proposals of social organization. We will see if these new denominations lead to other visions of society.”