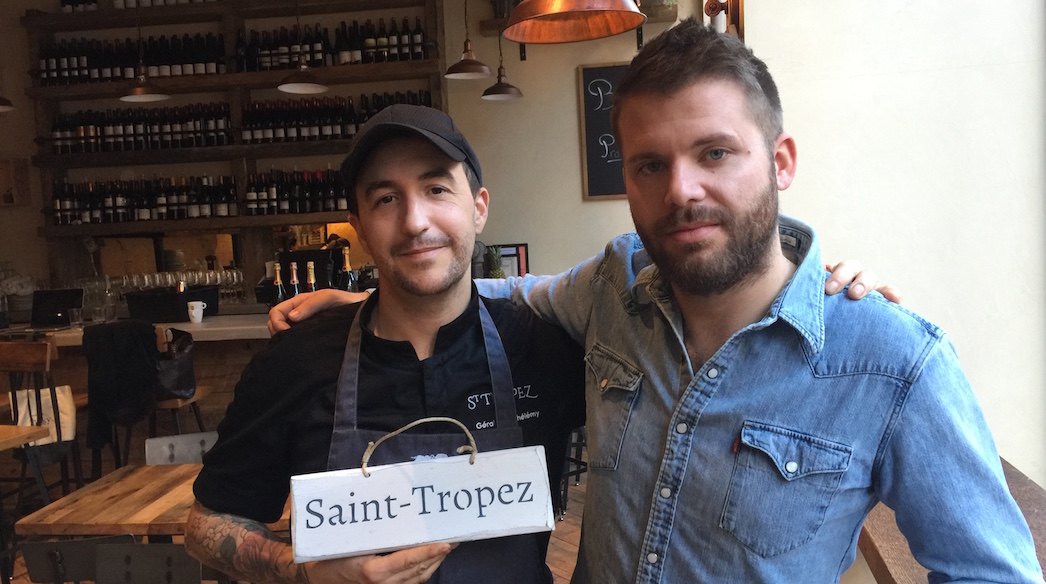 It’s Wednesday afternoon at St Tropez, where they’re in the midst of preparing for dinner. Hard at work since the opening of the restaurant-wine bar at the beginning of December, the owner Yohann Pecheux takes advantage of the free moment to eat a sandwich au saucisson, while the chef Gérald Barthélémy is busy in the small open kitchen. “I don’t even have time to eat,” smiles Pecheux.

Originally from Lavandou, near Saint-Tropez, Pecheux joined forces with the Vichy chief and two other Frenchmen in New York to bring this little piece of Provence to West 4th Street. Equipped with a large bay window, the luminous space is located across from a row of charming townhouses. Decorated with wood from floor to ceiling, including tables and chairs, the space is supposed to evoke the warm atmosphere of a Provence farmhouse. “The name St Tropez is misleading. In people’s heads, it evokes rhinestones and sequins. But where I come from, I grew up with the values of sharing, big tables, and good quality products. We don’t serve magnums of champagne here,” emphasizes Pecheux.

He’s had a plan for opening a New York restaurant in the works for several years. Pecheux, a former marine firefighter in Marseille and manager of a brewery in Aix-en-Provence, was encouraged by friends to come to New York. Arriving in 2012, he worked at Aria, a wine bar in West Village, before fully committing himself to bringing his St Tropez dream to fruition. “I had experience, but the banks in France were barely lending anymore. In New York, access to credit was easier and the city appealed to me.”

One of his current associates, Fabien Pichard, puts him in contact with Gérald Barthélémy. The latter of the two clinched a Michelin star for his work in the kitchen of Elysées, the restaurant at the Hôtel Vernet in Paris (renamed Le V). He arrived two months ago from Montreal, where he ran the Taverne Gaspar kitchen. The project began quickly falling into place. Coming to the US was a dream that the chef and his wife had long had. “In the United States, you get recognition when you’re working. In France, it remains Old Europe [stuck in the past]. It’s impossible for me to open in France,” he says.

St Tropez can accommodate 44 guests in the dining room and 16 at the bar. The restaurant has a communal table for twelve people near the kitchen. The menu includes dishes hailing from the South (Provençal stew, stuffed vegetables, sea bass in tapenade, tarte Tropézienne…). No dish costs more than $17. Forty-five wines per glass are on the menu. “Nothing here comes from Restaurant Depot,” says Yohann Pecheux, referring to a wholesale supplier for New York restaurants. “We preferred to reduce our margins and offer a quality product. The camembert comes from Normandy, the cheddar from England, the blue cheese comes from Ambert… here I found this little bit of a local Rungis [the world’s largest food market] with some real vendors,” adds Gérald Barthélémy. “In the past 20 years, having eaten at all kinds of places, we felt so frustrated [with non-fresh, unauthentic food], we decided we didn’t want to do that with our clients.”