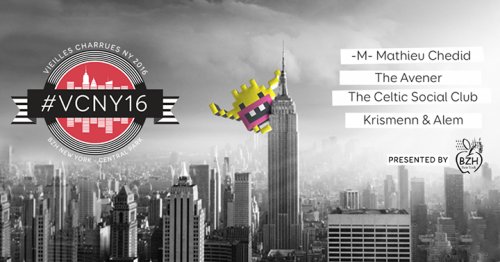 Every year since 1991, music-lovers have traveled far and wide with camping gear in tow for the four-day music festival known as Vieilles Charrues. Held in the sleepy Breton town of Carhaix, Northern France, the festival has hosted the likes of Bruce Springsteen, Bob Dylan, Elton John, Pharrell, Lana Del Ray… And for the past 18 years, Jérôme Tréhorel has been a faithful fan, volunteer, curator, and visionary. In his latest move as festival director, he’s bringing the show on the road.

The French festival’s debut in the United States should be attributed to a combination of luck and Tréhorel’s good instinct. “I came to New York for the first time a year ago in May, to publicize the Vieilles Charrues festival at New York City’s Fête de la Bretagne (Festival of Brittany),” Tréhorel explains. “During my trip, some friends got this idea in their heads to do something like Vieilles Charrues in the U.S.” But was it possible to pull off a four-day music festival in the middle of an urban metropolis?

It wasn’t until the day before Tréhorel’s flight back to France that this kernel of an idea came to life. “One of them proposed to meet at a soundstage. (She said) there was a place in Central Park I had to see….I went with her and fell in love with the venue.” For Tréhorel, once he saw Central Park’s Rumsey Playfield, the course of action was clear. Something big was brewing for the Vieilles Charrues’ 25th anniversary celebration. “The headline (I imagined would be) ‘French Breton celebrates the 25th anniversary of Vieilles Charrues… in Central Park!”

Growing up in Quessoy, a commune in rural western France, Tréhorel didn’t have the internet to explore music. It was a Suède concert on TV one night that got him hooked. He began his musical career by volunteering for Art Rock, the arts festival of Saint-Brieuc. He volunteered for Vieilles Charrues in 1998 in order to see Iggy Pop performing live. Over the next 14 years, Tréhorel climbed the ranks of Vieilles Charrues, showing the devotion of a true musical disciple.

After several years as a volunteer, the then-president Jean-Philippe Quignon recruited Tréhorel to scout new artists in Paris clubs. Later, as Head of Sponsorship, Tréhorel recruited 150 sponsors during soccer matches to cover the increasing fees from performers and keep ticket prices down. (Today, Vieilles Charrues continues to stand out from other music festivals scene for its accessible ticket prices.) When director Loïc Royant quit just before the festival’s president Jean-Philippe Quignon died, Tréhorel’s dedication and commitment to the festival made him a natural heir.

During Tréhorel’s tenure, Vieilles Charrues has exploded to become the largest music festival in France. This year, the festival celebrated it’s 25th anniversary, and reached a new attendance record of 278,000 people. “Some people come to Vieilles Charrues to see a specific artist live. Most come for the experience,” Tréhorel says. One can never fully appreciate a musician’s skill through earbuds, or at a busy bar. A field in rural France, however, is a distraction-free sanctuary allowing fans to be one with their idols.

“There is special atmosphere during concert. There is a fusion, a communion, between the public and the artist,” explains Tréhorel. “It’s a very specific atmosphere. It’s not because I work for this festival that I say that. Really it’s amazing. During the festival, when I need to get across the grounds, I always go through the crowd to catch their energy.” Moments like this remind Tréhorel of the revitalizing power of live music. “You’re exhausted (from) months of organizing this big event, but when you walk among the crowd… it’s like going to the beach and feeling the sun shine.”

Just as Tréhorel works to perfect the Vieilles Charrues experience for the audience, he also curates a unique hospitality for the musicians. Once an artist has performed at Vieilles Charrues, they’re part of the family.

One of Tréhorel’s most special musician relationships is with French pop-rock star Mathieu Chedid, known as M. “We grew up together at Vieilles Charrues, and we’ve had lots of experiences together there,” says Tréhorel. For M, the love is mutual. After the last Vieilles Charrues festival, M wanted to go out of his way to thank the volunteers who made everything possible. “So in December, Chedid threw a show just for the volunteers. It was a big surprise for them, and a magical moment for us.”

Another time M showed his allegiance to the Vieilles family was in 2012, after the death of the former festival president, Jean-Philippe Quignon. “Mathieu proposed to come to the funeral ceremony to play two songs (for Quignon), because he was very much a friend,” says Tréhorel. “We went on stage together, and Mathieu played one last time for our president.”

In his spare time, Tréhorel mentors new performers to help them cultivate their careers. Tréhorel’s dedication to promoting French Breton musicians outside of the Brittany area works through a program called Label Charrue, in which local bands learn from musical professionals, people in the business, and have a mini-tour across four departments in French Brittany. One of the groups on the rise in France thanks to this program is beatboxing duo, Alem et Krismenn, who will be playing at New York’s Vieilles Charrues.

Tréhorel fulfills his vision of a 25th anniversary NYC concert on October 1st. With a carefully planned set-up mimicking that of the one in Carhaix, New Yorkers will discover a bit of Vieilles Charrues, and the French and French Bretons of New York will experience a bit of home.

Attendees will hear a bit of France and a bit of the U.S., some old and some new. The spirit of Vieilles Charrues will be alive and well in New York so long as New Yorkers stop for a moment, listen closely, and feel the music.

10% off tickets for French Morning readers with code FRMORNING, and 25% of the fourth ticket bought.