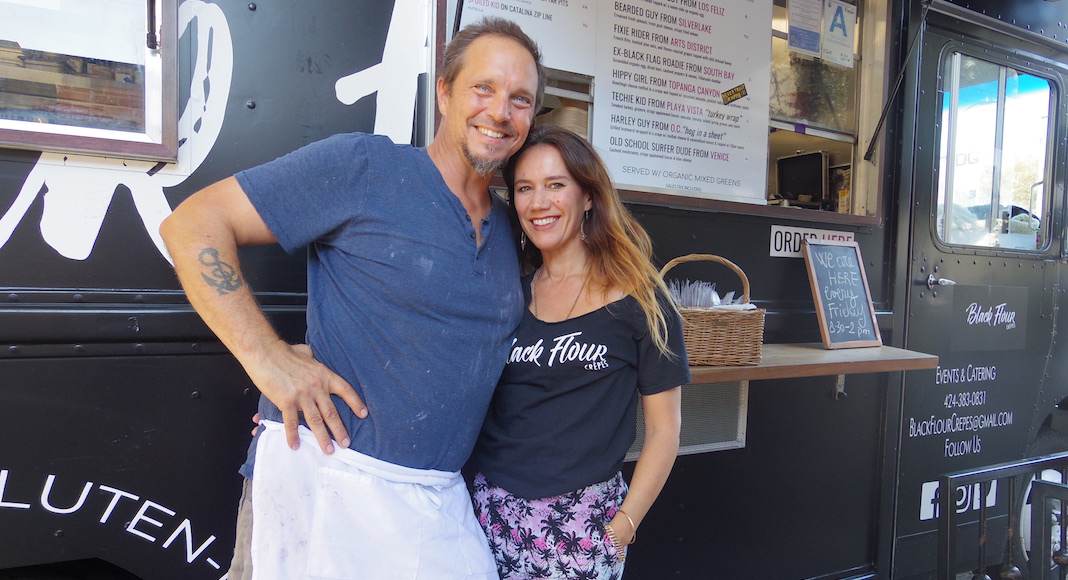 “Fifteen years ago, Parisians believed that a hamburger was just soft bread and a frozen patty. Today, this image has changed significantly. We want to do the same thing with crêpes, to get it out of folklore,” says American chef Jamie Young, seated besides his wife Marie Ravel.

With their food truck  Black Flour Crepes, which makes rounds in Los Angeles, the Franco-American couple wants to bring a bit of honor to galettes de sarrasin, or buckwheat crêpes. “The Breton crêpe isn’t represented well,” says Ravel, a native of Nîmes, France. “The dough is black, you have to make it that way even if it’s exotic here.” Expats in Los Angeles for the last three years with their three children, the couple keep the tradition of the recipe alive, while “dusting off the image of the crêpe Suzette.” It’s a concept that has not gone unnoticed: they were selected to participate in the first season of the “Food Truck Nation” show on the Cooking Channel. They’ll appear in the March 23rd episode.

During the two days of shooting in September, they showed what makes them so successful: the use of organic buckwheat flour (gluten-free), fresh and local ingredients, and many “homemade” products such as jam and beef bourguignon (which they use to garnish their “French tacos”). “If he doesn’t cook, my husband gets bored,” confirms Ravel.

Falling in love with this Breton classic in Paris, Young wanted to launch a crêpe restaurant in Los Angeles with a crêpe maker who would cook in front of everyone, like how a DJ practices his craft in the center of a club. “But here, things don’t happen with banks, but rather with private investors. But we didn’t know how to find them,” recalls Ravel. The couple then decided to change their initial plan and bought a food truck for $100,000. A purchase made possible thanks to revenues from an advertisement for Airbnb.

This is not the couple’s first attempt to enter the restaurant business. Their story began after they met during a shooting in Morocco, Ravel having been an actress for a long time and Young a scriptwriter. To learn French, this American found a job in the kitchens of a crêperie in Montmartre. Young started his food journey in the United States by peeling potatoes to pay his school fees before learning the basics of making crêpes.

In 2000, the couple bought the small restaurant. Four years later, the couple resold it to launch Pink Flamingo Pizza in Paris, offering “gourmet and creative pizzas with original flavors,” according to Ravel, who is proud to say that they had “the first deliveries of food by bike in Paris”. They also opened Floyd’s, a Kansas-style barbecue joint. Proud of their success — they have nine restaurants to their name — they sold licensing rights and moved to Los Angeles in 2015 to allow their children to enrich their lives with the dual culture their parents provide.

With Black Flour, they’ve re-invented Breton galettes with California flavors and names, like “Skinny French Guy from Los Feliz” (the crêpe complet with ham and cheese), “Fixie Rider from Arts District” (Brie and raisins), and “Hippy Girl from Topanga” (which has a likeness to avocado toast). They will not, however, be going full-California and make concession stand food. Despite the high demand, French fries have been excluded from the menu.

In addition to the search for funding, finding a place was difficult. Today, they have three weekly stops and provide catering services for companies and individuals (including French events such as the LILA party and the Colcoa film festival). With the visibility gained from the Cooking Network show, Ravel and Young hope to get noticed by investors who will give them the chance to open a restaurant in the west end of the city and settle into life a bit more.