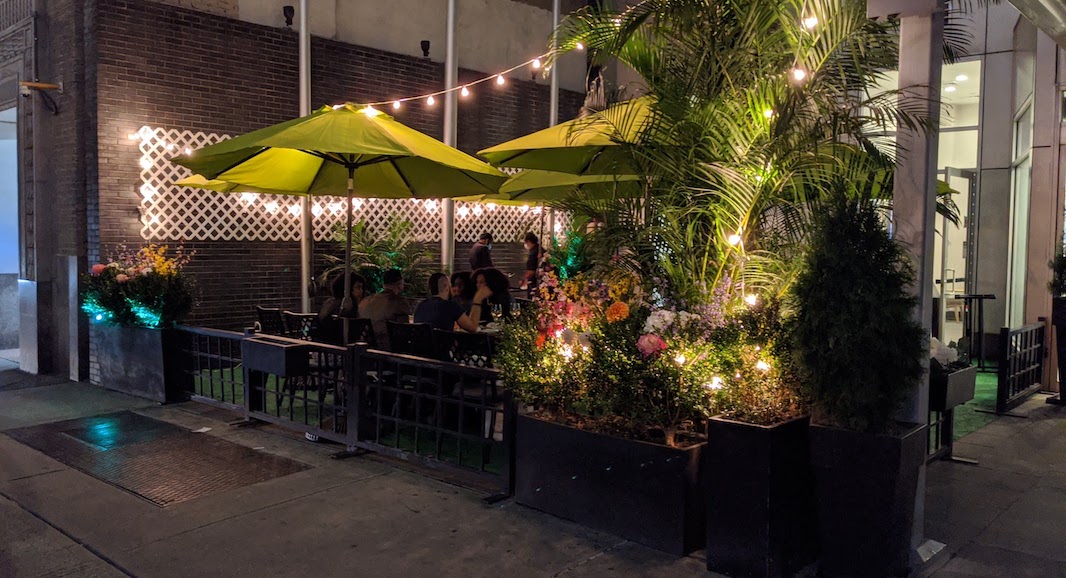 In the face of COVID-19, New York Restaurateurs are, “Positive, but not optimistic”

The numbers are frightening. Nearly 1,800 New York City restaurants have permanently closed their doors since March, and the beginning of the Covid-19 epidemic. Faced with the drop in cases this summer, and the implementation of measures such as social distancing and the wearing of masks, the city first allowed food shops to reopen for outdoor dining only at the beginning of July, and then at 25% capacity inside since September 30.

“This is a very insufficient measure,” says Max Guichard, manager of the restaurant Troquet in SoHo. “We can only seat 12 people indoors. It’s not profitable.”

“It’s better than nothing,” says Damien Frey, owner of La Cigogne, a French restaurant with an Alsatian touch in the Cobble Hill neighborhood of Brooklyn. “We would all like to welcome 100% of our customers, or at least 50%. But are people ready to come back to eat indoors with all these epidemic outbreaks that are developing again? I don’t think so.”

Etienne DeYans made the courageous choice to open in the middle of the pandemic, in October, in the Flatiron District. His restaurant, Gypsy Rose, has a large indoor space, with a bar and dining room with a dozen tables, but also a terrace that seats sixty. “We don’t know where we’ll be in the next few weeks, so I’m investing to cover and heat my terrace,” explains the Belgian-born Congolese restaurateur.

Like Etienne DeYans, many French restaurateurs rely on their terraces to survive, despite falling temperatures and winter coming soon. They are assisted in this transition by the city, which has authorized the extension of outdoor dining until further notice. “We’re in the process of upgrading our terrace with wooden panels and a hard top roof,” explains Max Guichard, whose restaurant has 36 outdoor seats, at the corner of Lafayette and Grand Street. “Here again we have constraints because we have to leave at least 50% of the space open.”

“I anticipated this by buying propane tanks as early as August. Prices have quadrupled since then,” says Damien Frey. New York City only allows gas heaters on sidewalks, while electric heaters can be installed on street decks. “You have to spend a lot of money, knowing that the prices of raw materials have exploded. For example, it costs $150 for a glass divider between the tables. When there is still stock! I had a hard time finding light garlands for example,” adds Etienne DeYans. He is installing large tents on 26th Street between 5th and 6th Avenue, where he has his own terrace.

Not everyone has had the chance to open a terrace, however. This is the case of Pascaline Lepeltier, sommelier and co-manager of Racines in Tribeca. “The part of the block where we are is on the MTA bus line. We are unlucky to be there. If we were 300 meters away, it would change everything,” she laments. Her establishment just reopened on October 15, after six months without a single customer. “We tried to survive as best we could. We tried takeout and delivery, we sold wine, negotiated our rent down. Fortunately, we ended up getting a PPP grant.” The PPP, or “Paycheck Protection Program,” is a grant program offered to companies to maintain their employees and salaries despite the crisis. Troquet also benefited from it. “Without it, we would have been out of business,” Max Guichard admits.

Another measure meant to help restaurateurs was voted in by the New York City Hall on September 16, the “COVID-19 Recovery Charge.” This 10% non-mandatory surcharge can be added to the customer’s bill by restaurants. “This is the stupidest invention ever,” comments Damien Frey. “It is surely not up to the customer to pay more, knowing that the sales tax and tip must already be added to his bill.”

“It’s not in our plans either, if only as a question of image,” Max Guichard adds. The same goes for Pascaline Lepeltier, who believes that the hospitality industry is being neglected by the public authorities. “There could be so many national aid programs to provide help, especially for rent, for tax cuts, but I have no illusions. Everything is blocked because of the presidential election.”

Etienne DeYans opened Gypsy Rose in October at the Holiday Inn Hotel. A partnership with a well-known brand that will ideally help him develop a clientele. “We offer our meals in room service, we will also install a bakery stand for breakfast in partnership with Pistache. It allows us to diversify in addition to the terrace and deliveries,” explains the restaurateur. As for Pascaline Lepeltier, she plans to expand her wine sales, as she has access to a cellar with many references. “We won’t get away with 18 seats in our dining room. We’re going to hang on because it would be hard to abandon a project like this one which was working well before the crisis.” On Troquet’s side, Max Guichard explains, “understanding the restrictions even if they can end up killing us.” The manager of this charming French bistro in SoHo wants to remain positive, “but we are not optimistic about our fate.”