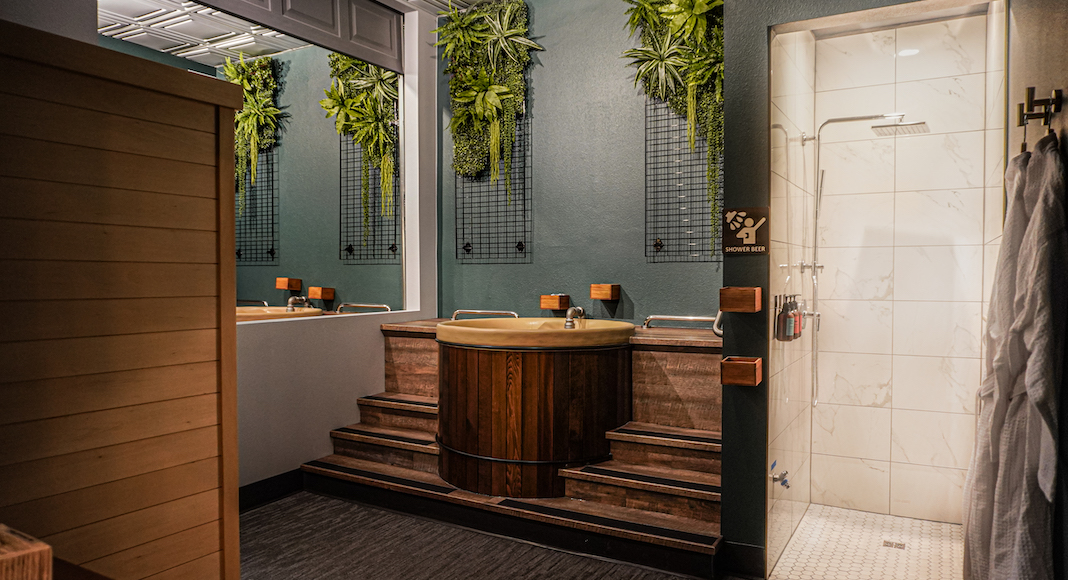 European “Beer Spas” are coming to the U.S.

The brewing industry is very popular in Uncle Sam’s country: it employs nearly 400,000 people and is valued at 112 billion dollars, with more than 8,300 breweries listed throughout the country in 2019, for a consumption of 68 liters per adult per year.

If the uses of this fermented alcoholic beverage seem limited, its integration is nevertheless developing in the wellness sector, with the appearance of beer spas similar to those in Eastern Europe. Hop in The Spa (in Sisters, Oregon) was the first to open five years ago, followed by Piva Beer Spa in Chicago in 2018. The latest addition is in Denver, Colorado. The Beer Spa (By Snug) was dreamed up by French entrepreneur Damien Zouaoui and his American partner Jessica French, and ranks among “15 such establishments worldwide,” she reveals. They have visited many of them.

It was during a stopover in Zakopane, Poland, during their trip around the world that they discovered the concept. “We obviously adapted it, because it wasn’t simply a matter of reproducing what we had experienced in Eastern Europe,” says Damien Zouaoui. “The idea was to attract men to a world that has always been feminine, and to fight against the stereotype that the spa is an activity that is only for women. We created a welcoming environment for all, playing on olfactory and visual marketing, but also the materials and codes of Colorado to create an ultra modern space. Wellness is at the center of the experience.”

New Yorkers at heart (that’s where they met), they had selected Seattle, Portland, San Diego and Austin as potential cities to set up their company. “Places where the beer culture is important,” Damien Zouaoui points out. But “The Mile High City” won out for several reasons: “the population is young (the average age is 36), and the median household wage is relatively high (about $70,000, which provides some disposable income). Colorado is also the healthiest state in the U.S., with only 18% obese,” he explains. The founder has found a loyal and receptive audience: “The first client came back four times, and other clients bought ten gift cards after one session. Many people have asked us to create monthly subscriptions, and we are thinking about the ideal formula. ”

After a launch party on Friday, Feb. 12, and a grand opening on the 26th of the same month, they are “booked up through mid-April, which is pretty impressive for such a new establishment. The city and region are best known for their outdoor activities, but in terms of indoor activities, the offerings remain limited to breweries, museums and axe throwing.” Together, the couple renovated a building that was more than 100 years old. “We are located in the historic Five Points neighborhood near downtown. Known as the ‘Harlem of the West,’ it was predominantly populated by the African-American community and was greatly impacted by segregation,” explains Damien Zouaoui, who was looking for “a location that fit into the DNA of Denver.” He adds that “the money [he] is loaned by the city is only loaned if it is in a neighborhood that needs to be economically revitalized. That includes employing low-income people. That’s what we’ve always had in mind: being part of the change and helping people get back to reintegrate.”

Zouaoui touts the benefits of hydro and aromatherapy. “The nutrients and vitamin B in the beer ingredients strengthen hair and nails,” he says. “They also help fight stress.” The spa offers one-hour bookings in a private room (called the beer therapy room) with an infrared sauna, shower and whirlpool infused with hops, malt and seasonal spices. All with a full mug – each month a new local brewery is featured with six beers served on draft. For those with little interest in zythology, The Beer Spa also serves wine, cider, kombucha and non-alcoholic beverages, all of which are locally sourced.

“Our business model is based on intimacy. People book their ‘beer therapy room’ for an hour; they have their own private space and feel confident. We had this vision even before the pandemic, so we have no problem meeting the health recommendations related to COVID-19. We have four pools, saunas and showers in four rooms. We had originally planned for only three, but our project manager insisted that we rework the dimensions of the rooms so that we could open up an additional room.” Open seven days a week (“Monday to Monday,” jokes Zouaoui), the spa is running at full capacity. “We tried to identify the slowest days.. but there aren’t any. Which is a good problem to have,” he acknowledges. “Right now we have eight employees, divided into two teams – concierge on one side (those we call beer therapists) and the maintenance team on the other – but want to hire as much as possible. We run almost mini hotel rooms, and do a thirty or forty minute deep clean after each guest. It’s very physical work: the whirlpools are emptied, washed, disinfected, dried and refilled.”

For the full experience, it’s recommended that you stop by the relaxation room, where four “zero gravity” massage chairs (a technology developed by NASA) will complete your relaxation for fifteen or thirty minutes before you leave the premises. Like the rest of the services offered by Beer Spa, these massage sessions are enabled by a local manufacturer, Positive Posture. Their store also sells CBD-infused bath bombs from regional brand Vital You, as well as beer shower gels, shampoos and conditioners that they developed themselves. With their heads full of projects, the creators of the Beer Spa are already dreaming of opening a second one, and maybe even franchises.