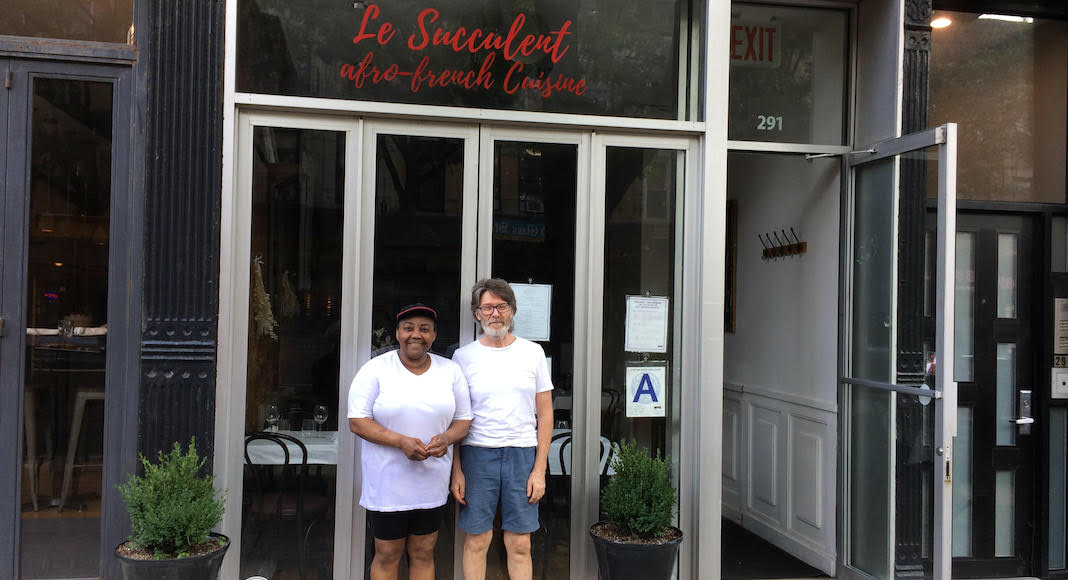 The least we can say is that the New York adventure of Mélanie and Xavier Delcourt has had its twists and turns.

Originally from Cameroon, Mélanie trained as a chef in France, passing through many prestigious establishments such as the Ritz and the Palais de Tokyo restaurant in Paris. “I had the chance to work with the best like Thierry Marx and Jean-François Piège,” she says. It was during a family vacation in the United States a few years ago that the idea of opening a restaurant in the land of Uncle Sam emerged in the couple’s minds. “Xavier was more interested in San Francisco. I dreamt of nothing but New York.”

The two lovers attempt a first project in Manhattan in 2018 that quickly turned into a nightmare. They spend tens of thousands of dollars on a place that will never open, left feeling “robbed by the realtor.” The couple then sets their sights on Brooklyn and Park Slope, where they open their restaurant Le Succulent in January 2019, “a semi-gastronomic establishment with very fine-tuned French and Cameroonian dishes,” says Mélanie. Their first year was consecrated by a nice article published by the New York Times in December.

The couple was then convinced that their business would finally take off, but the pandemic forced the restaurant to close its doors in March 2020. Since then, Mélanie and Xavier Delcourt have been accumulating rent arrears with a non-compliant landlord. Worse, the latter is now suing them for the payment of unpaid sums, which puts the survival of Le Succulent in jeopardy. “We feel like we’re sailing blind into the middle of a storm right now,” sums up Xavier, who handles hospitality. “We’ve done it all wrong again because we don’t know enough about the legal side of things in the United States.” “Our real estate agent did not negotiate our lease well,” adds Mélanie.

Very worried, the couple put the butcher’s block in the kitchen to hope to find a more normal activity. Mélanie has changed her menu and now offers two traditional Senegalese dishes, Yassa (rice and onions with chicken or fish in a mustard and lemon sauce), and Chebu Jen (pheasant fish with vegetables cooked in a tomato broth). “The brunch is more French with, among other things, a Niçoise salad, a Caesar salad, and Parisian ham and cheese crepes,” adds Melanie. “There are few restaurants worthy of the name in New York that offer French cuisine with a true African identity.”

The place, located four blocks from Prospect Park, seats about 30. The interior is sober but cosy. “We target a clientele that appreciates fine food and wants to spend a quiet moment, far from the hustle and bustle,” explains Xavier. The terrace on the street can also accommodate a dozen people. “It took us months to get a liquor license. It finally allows us to offer good bottles of wine and beer,” adds Mélanie.

The couple hopes to get back up on the horse quickly, and awaits you in their restaurant.