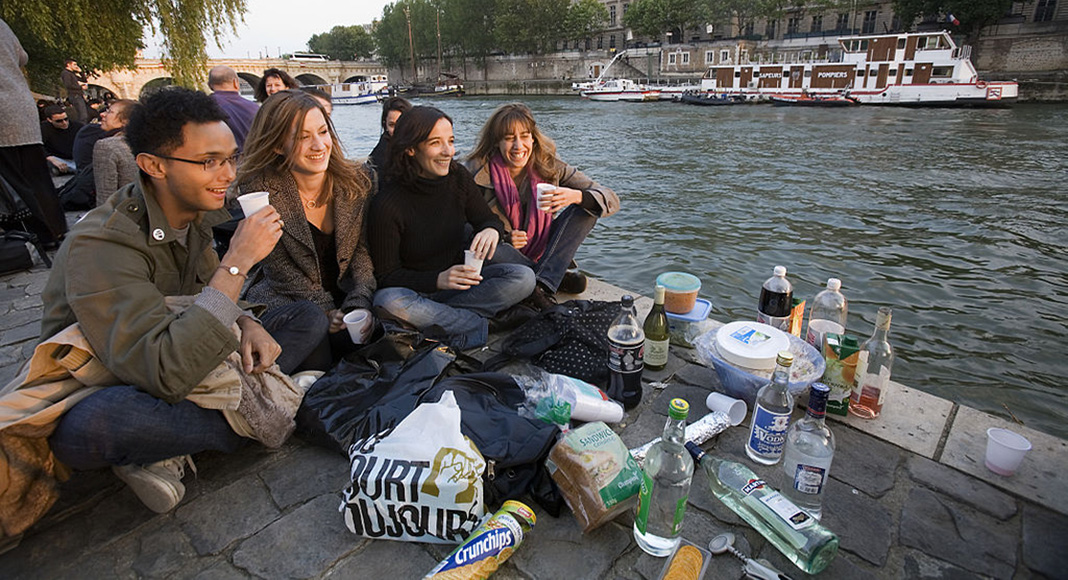 Time slows down in Paris. Where New York bustles with the heart-pumping energy of a drum solo, Paris swings to the rhythm of an upright bass. To spend time there is to embrace the moments in life where time seems to nearly stand still: sipping a coffee on une terrasse, smoking a cigarette on a balcony, or reading a book on a park bench.

It’s uncountable, the number of times you’ll see a Parisian simply sitting and staring out at the world. These moments are the essence of Paris. And in a city so beautiful, and one that’s packed to the brim with parks, cafés, and landmarks, there’s no shortage of wonderful spots from which to do just this. These are seven of the best places to watch people, and the world, pass you by in the City of Light.

Gardens fit for a queen — quite literally — Les Jardins de Luxembourg are located just south of the Sorbonne. And on a warm summer’s day, there’s no better place to hang out. There are sculptures galore, a duck pond where kids frequently set sail to small wooden boats, and groups of Parisian of every age, race, and creed sitting on lawns, wrought-iron chairs, and benches to “bavarde,” or chat. Grab a crêpe at “L’Avant Comptoir,” and find yourself a plot of land to sit on. You’re no doubt going to see, or hear, or smell, something interesting.

Le Refuge is exactly what it advertises itself as: a refuge. Nestled into the Rue Lamarck in Montmartre, across from the exit of the Lamarck-Coulaincourt metro station, this is my favorite place to grab a glass of wine in all of Paris. In many ways, it’s a typically Parisian cafe. The waiters grumble if you move your outdoor table into the sun; bar-backs smoke outside and pick up deliveries; regulars cram into the rounded bar with their crosswords and philosophy books. But the cafe has a particular “je ne sais quoi” to it. Perhaps it’s the red awnings, or the slanted streets, or the proximity to the steps leading up to Sacré-Cœur. (Or maybe it’s just the wine.)

Parc Montsouris is like the hipster version of the Jardins de Luxembourg. It’s a bit out of the way (located in the 14th Arrondissement), but has all of the same amenities: ponds, playgrounds, a summer concert venue, etc. Here, you’ll often find young people taking part in workout classes, college students from the nearby Cité Universitaire dorms — which house much of Paris’s international student body — skipping classes, and a diverse cross-section of locals hanging out in every season of the year.

4) The banks of the Seine

Maybe this one is overdone, but it’s almost impossible to go to Paris and not spend some time lounging alongside the Seine River. One of the best places to sit is just south of the Ile de la Cité, along the Quai de la Tournelle, which gives a magnificent view of Notre Dame. Here, the river branches into two in order to skirt around the second tiniest island in Paris (after Ile Saint-Louis). Of course, anywhere along the Seine you choose to sit, you’ll no doubt bump into a wandering bard playing Edith Piaf, or a magic show, or a pair of nighttime revelers, or sometimes all three.

In a city bisected by a rushing river, an artificial lake at the mouth of two small canals may seem like nothing special. But near the Bassin de la Villette, a small body of water that separates the Canal Saint Martin and the Canal de l’Ourcq, is indeed a great place to hang out. Restaurants, cafes, and bars dot the surrounding area, and further south, along the Canal du Midi, are some of the best nightlife spots in Paris. In the summer, the Bassin also becomes an extension of Paris Plages, which is prime for people watching.

If you want to get caught up in the buzz of the center of Paris, find yourself a cafe to sit at along the Rue Montorgeuil in the 2nd arrondissement. With its open-air market and shops of every kind, this street also doubles as a Christmas market in the winter, which can only mean one thing: vin chaud!

The locks may be gone, but the Pont des Arts remains a prime spot to sit and people-watch, especially if you can snag a bench in the center. One of many bridges that cross the Seine, including the gilded Pont Alexandre III and the double-decker Pont de Bir-Hakeim, the Pont des Arts was once notable for its 45 tons of love locks hanging from the rails. More recently, it’s been fashioned into an outdoor art museum. Oh, and the views of the Eiffel Tour aren’t half bad.