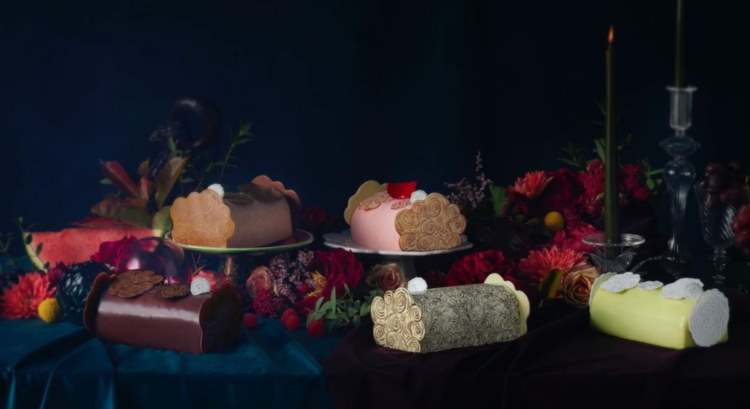 As the holidays inch closer, we’re dressing both our homes and desserts in festive attire. France does so with a show of bûche de noël,  yule logs, that turn into the pièce de résistance of the holiday dinner table. And so, every December, pastry chefs present their own creative version of the popular cake.

The yule log is essentially a sponge cake traditionally made from a genoise base as a Swiss roll, revealing swift swirls on the inside. It is composed of the sponge, a cream (most usually a buttercream,) and chocolate ganache that covers it like tree bark. The desert is often presented with one end of the cake cut off  so that it looks like a fireplace log.

The yule log dessert originates from 19th century France. The origin is linked to the winter solstice, the longest night of the year, during which a huge log was burned as an offering. To make the ritual even more special, a bit of wine or aromatic oil was spilled on it (perfuming the whole house.) In fact, to this day, in Southern France, it is a ritual to burn a log in the fireplace every day of December. But how did a piece of wood turn into a cake? While many chefs fight over the paternity of the dessert, it was born when the log tradition fazed out and instead a smaller log was placed on the table as a reminder of the holiday spirit. It only took so long for someone to make it into an edible version. Why would you put something that you couldn’t eat on the table anyway?

This year, pastry chefs are presenting some of their most elaborate bûche ever. We’ve compiled this year’s bests:

Leave it up to the patron of the modern French patisserie to make not one but eight yule logs. His heart-stopping creation is a pistachio-praline made using Iranian nuts and decorated with intricate toile design. It delivers the nutty flavor we so yearn for during the holiday season. Other notable options include an Ecuadorian chocolate bûche, the brand’s own signature Ispahan yule (rose, lychee and raspberry), an exotic fruit Kokoro Bûche, a Citron Caviar Bûche, an Infiniment Praliné Noisette, and more. The signature creation goes for a whooping €120 (€250 for entremet version), while the additional seven versions range at €48 – €82. They are available for in-store pick up and delivery. 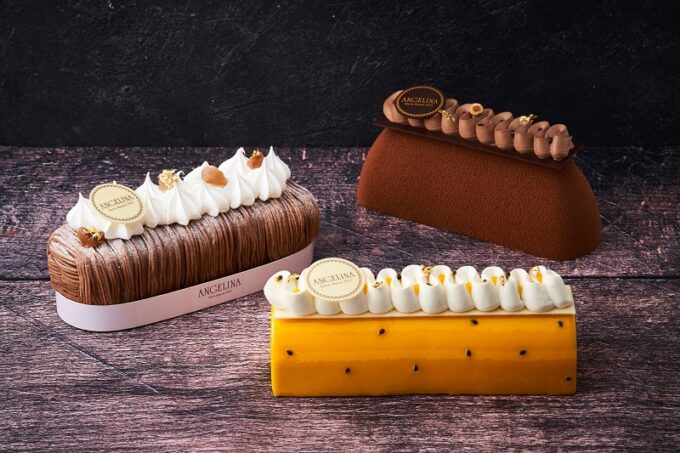 This Parisian patisserie is offering three yule logs this winter season. The limited edition “Forêt Mont-Blanc” option is available as the fan-favorite dessert of the house. Both chocolate and passionfruit-pineapple yules are also on sale. These are decorated in a traditional log style with piping atop the cake. The special edition goes for €89, serving 8 to 10 people, with the two other options for €67-€69. Individual logs are also available at €7.90. Angelina Paris at the Bryant Park NYC location will be taking preorders for a Bûche Mont-Blanc too (585-438-5347.) 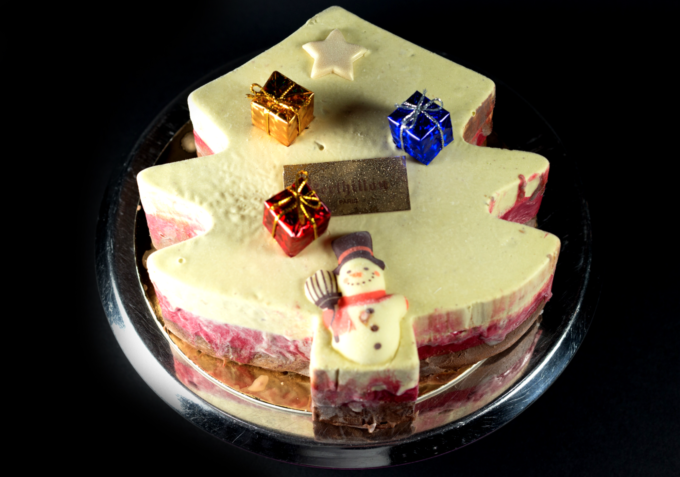 How about an ice cream bûche? Paris’ premier glace maker is making its own yule logs and additional desserts in the form of a Christmas tree this year. The featured options include a green tree: pistachio, raspberry, and chocolate, or the red tree:cherry, apricot and almond. Both are available in store for  €32. 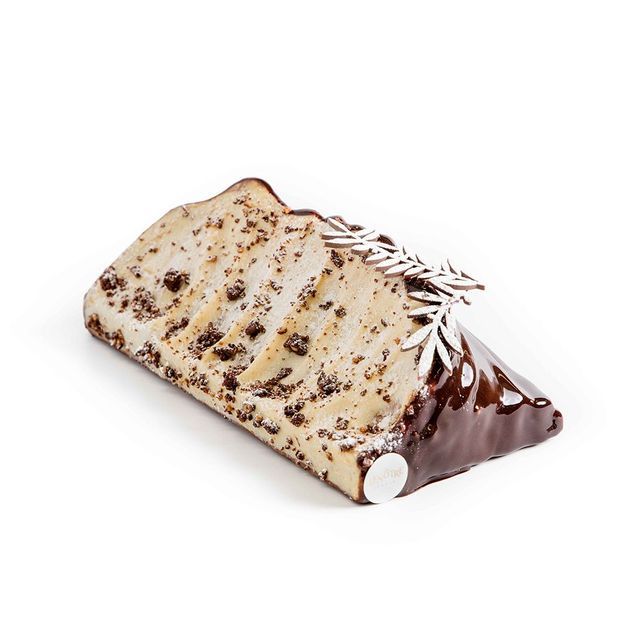 The Parisian pastry house took to Provence for their inspiration for the 2021 yule logs drawing flavors like calissons, mandarins and lemons. Chef Guy Krenzer’s crown-jewel is the “En Balade sur la Montagne Sainte-Victoire” yule in the shape of a mountain featuring a mandarin confit and mousseline, pine nut and hazelnut praline striking with the tasty chocolate mousse (€130 , available starting Dec 15th.) The brand has also included gluten-free and iced options this year as well. 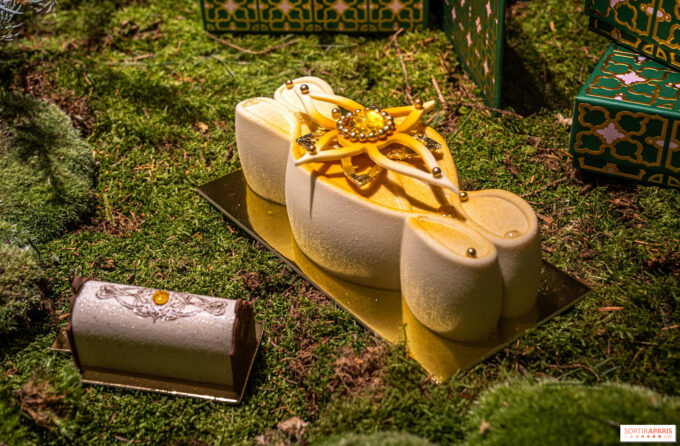 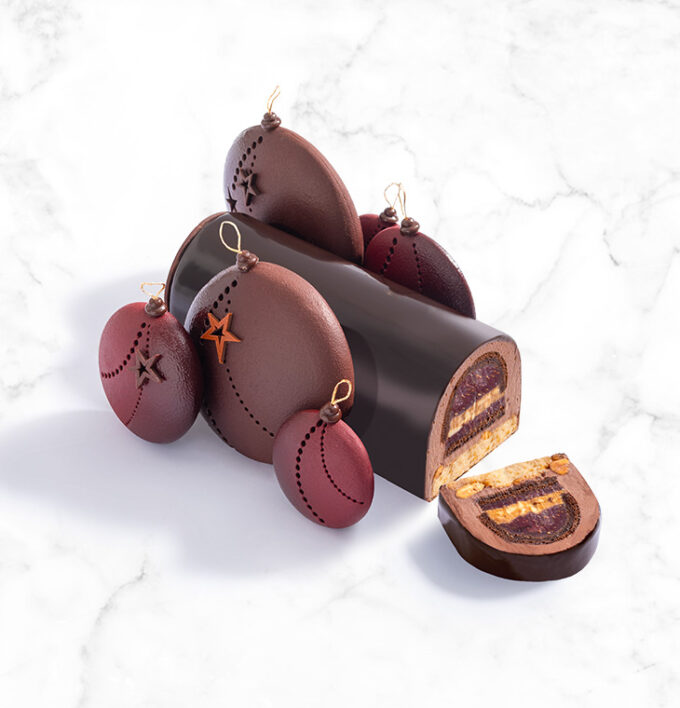 The chocolate house presented their own holiday yule log featuring the traditional log shape decorated with chocolate ornaments. The “Bouleversante” yule log is made from 69% île de Sao Tomé dark chocolate mousse, old-fashioned almond praline, soft cake with crunchy almonds, a layer of fresh violet fig compote from Sollies (€120 .) Other yule logs are based on a passion fruit and praline flavors. The NYC will not be offering yule logs this year. 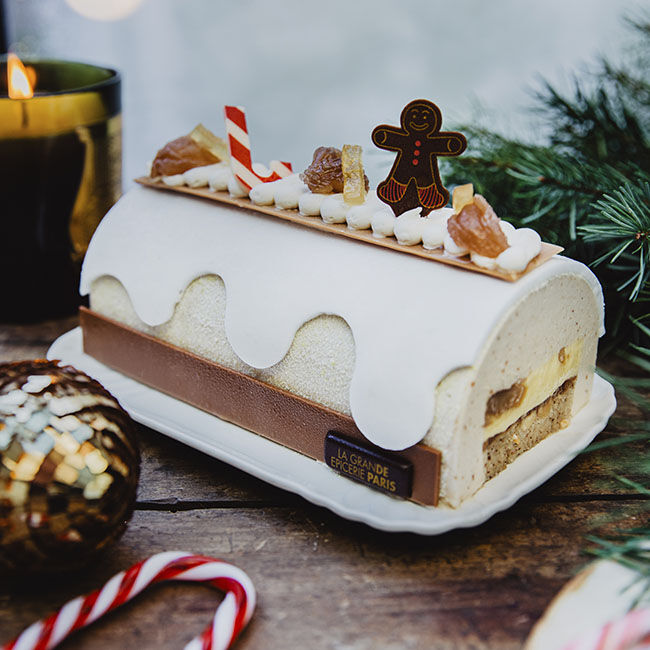 This festive bûche is a nod at the traditional flavors of the dessert with its contrasting textures and chestnut lemon and hazelnut filling. Le Grande Epicerie de Paris has also set up a whole holiday area within its store including many holiday treats, advent calendars, cakes, and more.