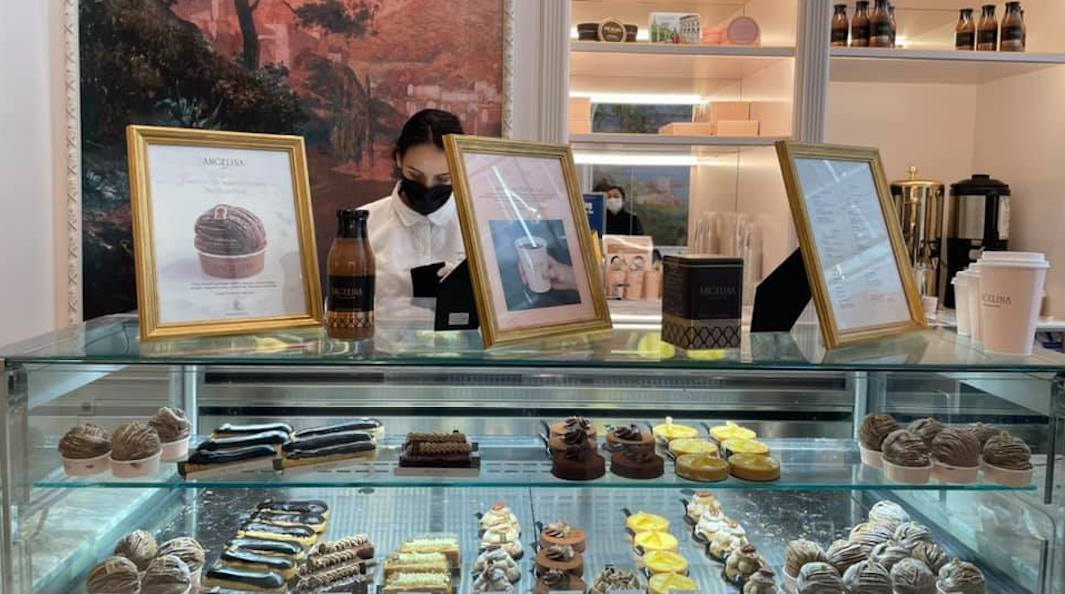 “A welcome we didn’t expect”: Angelina arrives in the U.S.

It’s Black Friday. At the corner of 40th Street and 6th Avenue in Manhattan, a long line has formed on the sidewalk. Among the passersby, between a cement truck and a construction site where a few workers are busy, Mickaël Cova is busy trying to get customers to drop in to the new Angelina New York, opened on November 17. “It’s crazy. New Yorkers gave us a welcome we didn’t expect due to the current economic situation. They are willing to wait in line for a long time to live the Angelina experience,” exclaims the Frenchman.

He is part of the trio behind this much-awaited launch. A former accountant, he linked up with two of his cousins – including the financier Julien Zerbib – to open the famous tea salon in New York, the first implantation of the brand in the United States, following launches in Asia and the Middle East. Based in France and waiting to install himself more permanently in the United States, they work on location with Anthony Battaglia, formerly of French restaurant Le Coq Rico, who also participated in the opening of Maison Kayser bakeries in the U.S. He is the director of operations of this “master franchise,” in which the parent company (the Bertrand group, owner of several hotels, renowned restaurants, like la Brasserie Lipp and Le Procope, as well as fast food chains) and the franchises share royalties in strategic markets.

“With my associates, we have predicted that there would be a demand in the United States for high-quality French food. We have seized the opportunity,” confides Cova. “There is a strong demand in New York in particular, with its large French community and its tourists, for this kind of concept. Angelina is typical of the kind of service that pleases New Yorkers.”

The launch project has been in the cards for more than two years. “During the whole summer of 2018, we skimmed the streets of New York in the search for a space,” he recalls. At the start of the year, the associates set their sights on a small space situated on the first floor of a luxury residential building of 72 units next to Bryant Park. Unfortunately for the admirers of Angelina, Covid reshuffled the cards. The opening, initially scheduled for the spring, had to be postponed due to delays in finishing work and obtaining permits. “The question of stopping wasn’t posed mostly because we have a loyal clientele who was waiting for the opening and we are conscious of the brand’s potential in New York and in the rest of the country,” explained Cova.

Compared to its competitors, Angelina can count on a very loyal international clientele, seduced by the refined universe of a brand founded in 1903 and frequented by Coco Chanel and other celebrities. And let’s not forget their iconic products, like their famous creamy hot chocolate, which has gained a worldwide reputation. Contrary to Maison Kayser, which has gambled on serial openings and rapid growth (before closing its boutiques during the pandemic), “we don’t want to have stores on every corner,” emphasized Anthony Battaglia, who spent a year with Maison Kayser USA in 2015. “If we have three or four addresses in New York, that would be our maximum.”

These openings are envisioned in other cities (Miami, Washington, Dallas, Los Angeles, Las Vegas…), but, “we want to see how the brand is perceived before thinking about developing outside of New York,” adds Cova. The New York establishment offers a large inventory of pastries to go – like their classic Mont-Blanc dessert – and a sixty-seat dining room with a full menu of American and French dishes, all in a chicly decorated room luminous with chandeliers, mirrors, and landscape paintings. All of the pastries are made on site, with the exception of macarons, made by head pastry chef Noémie Tessier, a French native. Angelina also sells products like tea and hot chocolate at the store and online. They have already received orders from California, Texas, and the Midwest, proof of their influence outside of the Big Apple, according to their head team in the U.S.

Mickaël Cova and Anthony Battaglia are discreet about the investments made to open this prime address. (According to the profile of one of their associates, some four million euros was invested in the operation by the real estate group IDEC.) But they are quite chatty about other numbers: “When we opened, we had to reorganize our work practices in order to keep up with demand. We were at 150-200 pastries per day. And we put out 1,000 right now,” notes Battaglia. A great performance considering the fact that Covid has emptied Midtown, where Angelina has taken up residence, and there are no international tourists and a large number of residences and offices have put out their lights. “Our clients rejoiced that we came to them, because they couldn’t travel due to COVID-19,” adds Cova. “In the past, they could travel to our historic location on Rue de Rivoli or elsewhere in the world. Angelina has a strong potential to develop.”