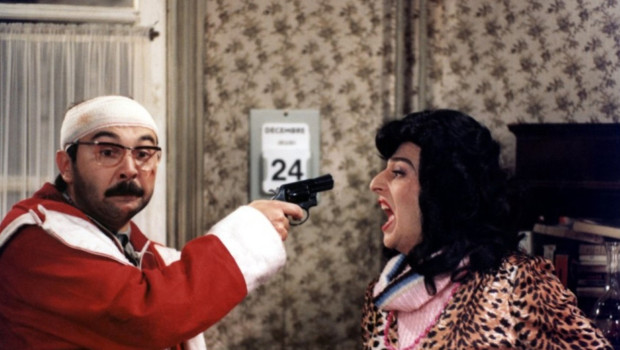 The French may never pull even with America on certain fronts—we incubated and perfected rock ‘n’ roll, stole colonialism and made it more a matter of media than mortar, and took every food the world ever invented and deep-fried it. And while the cinematic might of the United States is as manifest as our destiny once was, we owe moviemaking to France, which has continued to innovate and disrupt the medium while we’ve concentrated on the bigger, more star-filled fish we were frying.

Christmas movies, though, present a bigger problem: the American film industry can’t even compete with itself. How does France stand a chance with their holiday offerings when we can’t even recreate the genius of Miracle On 34th Street 47 years later? When the only way we can improve on the British master adaptation of A Christmas Carol is by replacing Alastair Sim with Michael Caine and everyone else with Muppets? When we absolutely nail mashing up Dickens with Jim Henson and our next best idea is to turn everything CGI and have Jim Carrey do the voice acting?

But maybe our legends loom too large to do anything but limit us: where do you go from It’s A Wonderful Life? Certainly not to Jingle All The Way with Arnold Schwarzenegger or The Santa Clause with Tim “The Toolman” Taylor. Our only original Christmas offering since the one-two punch of Wonderful Life in ’46 and Miracle in ’47 is 2003’s Elf. People now distinguish themselves from the herd by claiming that Die Hard or Gremlins is the greatest Christmas movie of all time—that’s how futile the whole endeavor seems, even to us, the country that gave the world Home Alone just to prove we were still trying.

If any French movies are going to elbow their way into the American Christmas pantheon (there’s an industry we’ll never beat France in: pantheons), it’s these.

While we were still moon-eyed over World War II stories (and we still are), writer and director Christian Carion took the real-life story of the “Christmas truce” of 1914, when the Western Front of World War I went quiet for an unofficial holiday armistice, with soldiers from both sides rising from their trenches to bid each other Merry Christmas, and turned it into a movie starring Inglorious Basterds’ Diane Kruger and Love Me If You Dare‘s Guillaume Canet.

Speaking of unfair advantages, no one in America ever thought to turn dressing up as Santa into a way to pick up women. Enter the French, who were knee-deep in the Nouvelle Vague film movement at the time, add a little Jean-Pierre Léaud as your antagonist, and all of Hollywood is suddenly wondering why no one ever tried to get laid on Christmas in their movies.

Try as we might, we can never make Catherine Deneuve an American actress, and Arnaud Desplechin used that unfair advantage in the Palme d’Or-nominated A Christmas Tale, a black comedy about the holiday strain on the ties that bind families together.

Probably more evocative under it’s English title, Season’s Beatings, La Bûche brings a whole family together at Christmastime by putting their husband and father into the grave—twenty-five years after the Christmas when the parents announced they were getting divorced. The New York Times called it a “minor miracle: a Christmas movie that won’t leave you with indigestion, a splitting headache or a mouth full of cavities.”

While we’ve got Scrooged, France has Le Père Noël Est Une Ordure, a cult comedy about two people stuck working a suicide hotline on Christmas Eve who are visited by a Dickensian litany of characters, including a Santa Claus wielding a gun and looking for his pregnant girlfriend. We let Nora Ephron turn that concept into Mixed Nuts, which hovers at 7% on Rotten Tomatoes. Advantage: France.

Just on the off chance that no Christmas movies are working their magic on your tear ducts this year, try L’Arbre du Noël, in which William Holden tries to grant his dying son his every wish during his last year. You really don’t need a trailer for this one.

And of course, one for the kids. Granted, you’re likely to see this one totally dubbed and with the kid sounding an awful lot like Harry Potter, but L’Apprenti du Père Noël wrests the job of taking over for Santa from Tim Allen and returns it to a kid, who likely will not ask questions about labor laws in the North Pole.