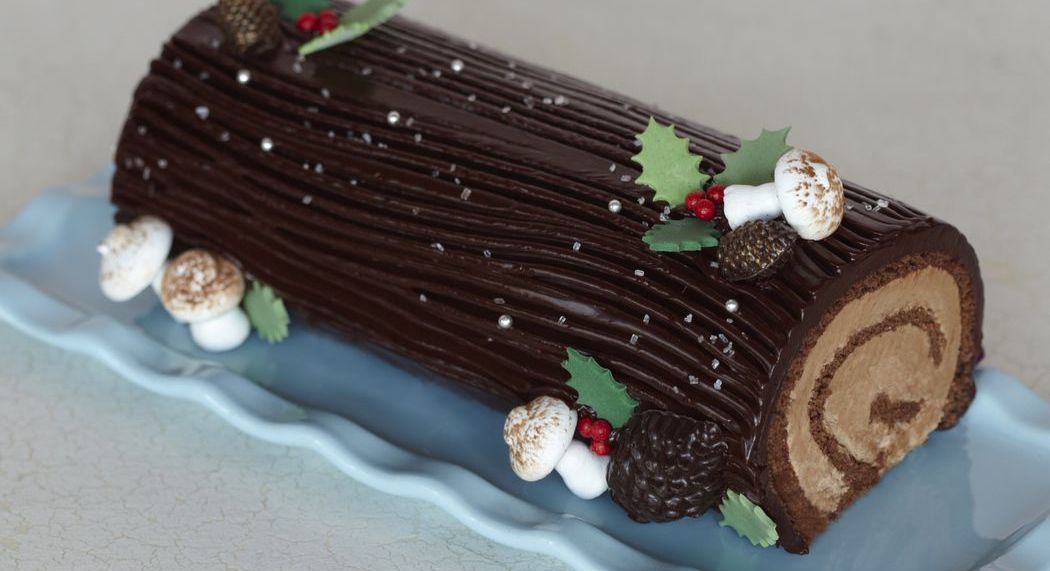 Beyond Brioche: The History and Tradition of La Bûche de Noël

December has arrived, and with it, promises of snowy holidays, ice skating, and warming frozen hands around a warm mug of hot chocolate.

Sorry, wrong country. Most of France hasn’t yet seen snow this year, and temperatures are more midseason-coat than down parka. Gloves? Hats? Still in the closet.

Warmer weather, however, doesn’t mean the holidays aren’t in full swing. Department stores have a full array of tinsel on display, and pastry shops are piled high with the requisite cakes.

As Parisians and small town dwellers alike purchase their freshly-cut Christmas trees, the anticipatory delight in getting together en famille is starting to show. French family meals are known for three things: lasting hours on end, being the scene of political family feuds (for which there is ample material this year and every year), and traditional holiday desserts.

America has its Thanksgiving turkeys, but France has its Christmas birds too. Here at Beyond Brioche, we say it’s all about what comes after the bird: dessert. And Christmas dessert in France can only mean one thing: la bûche de Noël.

Head into any high-end pastry shop in a major French city and you’ll find some incarnation of the bûche de Noël, or Christmas yule log. Modern bûches resemble a log only because of their cylindrical shape and come in all colors and flavors. As delicious as they may be, for many French, the real deal is the one they helped their mother make in the kitchen on the morning of December 24th.

First thing’s first. Why in the world would anyone bite into a dessert that looks like a log?

The history of the bûche de Noël is a history class in and of itself. The tradition dates back to medieval times, one of many pagan rites competing with Christmas traditions. A log of wood—often from a fruit tree to ensure a successful harvest in the year to come—would be brought home and placed in the hearth, which at the time functioned as the epicenter of every family’s activity. Depending on the region and its various beliefs, salt, wine, or holy water—among other ingredients—were sprinkled atop the log before lighting it on fire. Sprinkling wine, for example, was yet another way to guarantee the following year’s grape harvest would be bountiful.

Once lit on Christmas Eve, the log is supposed to burn for at least three days for good luck—ideally until the New Year. It would have to be a massive, damp log to achieve this, but no matter, that was just the start: ash from the log was thought to also provide protection against lightning strikes, and the coals were used throughout the year in various medicinal potions. That’s all interesting, but at what point does the cake come into the picture?

Little by little, traditional hearths disappeared in homes, replaced by wood-burning stoves. With no center stage left for the Christmas log ritual, smaller logs were placed as a decorative reminder on tabletops, and it was only a matter of time before some intrepid and imaginative soul realized that it would be a lot nicer to eat the log rather than simply watching it. The bûche de Noël as a dessert was born.

What makes the bûche such an astounding year-after-year success in French homes is that pretty much anyone can make one. It takes only a few ingredients to create a simple bûche, and the baking skills required aren’t nearly those of a gateaux Opera or Saint-Honoré cake. The bûche de Noël is the perfect opportunity for what Americans like to call “quality family time.”

The step-by-step is simple: start by making a jelly roll cake and buttercream (the cooked version with egg yolks). Roll it all up, just like a jelly roll cake, and frost with silky ganache. A fork is all you need to create a yule log effect, but a little slicing and reassembling here and there makes for a more realistic look. Diminutive decorations such as handmade marzipan red-and-white mushrooms go a long way to create that Christmas twinkle that appeals to children and adults alike. A yule log is a true family dessert, meant to be shared and enjoyed with leftovers for days after Christmas lunch.

There are hundreds, dare we say thousands, of variations on the bûche throughout France, but it’s a safe bet that almost everyone has a version that reminds them of their childhood. Beyond Brioche favors a simple twist, where chocolate pastry cream lightens up the jelly roll cake instead of buttercream, although in all honesty, it depends on what you were brought up enjoying.

This Christmas, if you fancy a slice of French tradition around the dinner table, it doesn’t get more authentic than a bûche. Our recommendation? Find a simple recipe, such as the classic La Grenouille bûche featured in the New York Times in 1982, or French cooking master Jacques Pépin’s iconic dessert. One word of advice: sprinkling wine or salt on this one won’t get you anywhere, although we can’t vouch for the holy water.

Follow these iconic bûche recipes for a Christmas dessert à la française from the New York Times  or the  Food Network.  For a recap of bûche history, look no further than the Ministry of Culture themselves.