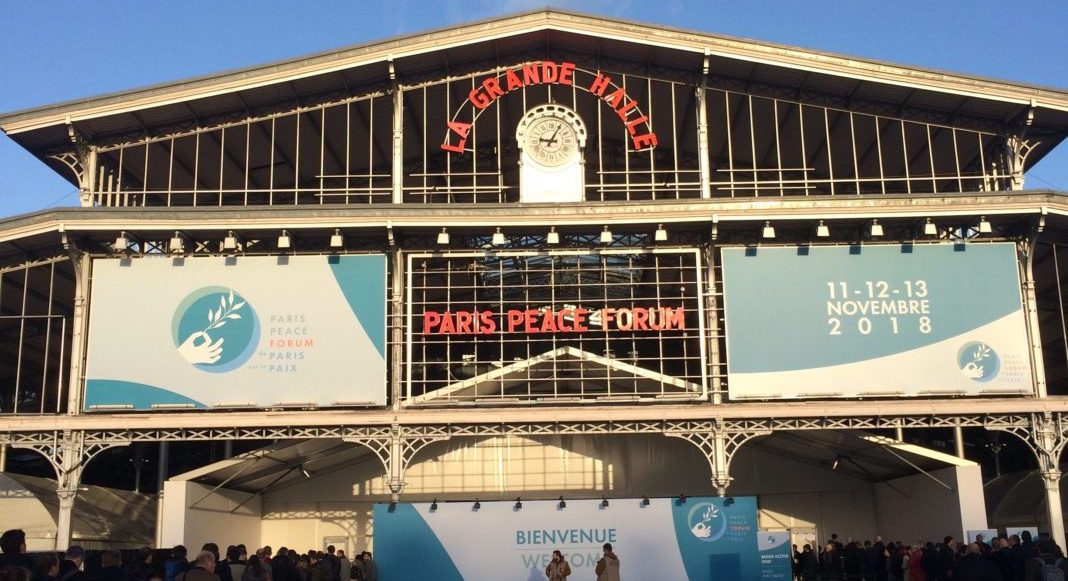 One hundred years after World War I, the global conflict that wiped out generations of men and women worldwide, the Paris Peace Forum was held from November 11th to the 13th at the Grande Halle De La Villette to remind us that international peace is paramount more than ever right now. The Paris Peace Forum is a new annual event championing international cooperation in order to solve global challenges and work towards lasting peace. Nearly 900 projects from 116 countries applied to have their efforts showcased at the event. Among them, 120 were selected. At the end of the forum, 10 of those projects were chosen by forum participants and the selection committee to receive special support from the Paris Peace Forum for a year, until the next edition of the forum in November 2019.

This year, the Paris Peace Forum projects came from five sectors: the environment, peace and security, development, new technologies, and inclusive economy. While all the proposals were compelling and important, here are five initiatives led by influential women from across the globe.

Meg Riggs, deputy counselor of political and economic affairs for the Embassy of The United States in Ethiopia spoke passionately about her work with, The International Gender Champions (IGC), headquartered in New York City, Geneva, Vienna, Nairobi, and Den Haag. Co-founded by, [email protected] in 2015 with the UN director-general in Geneva and the US Ambassador, the IGC is a network of women and men determined to break down gender barriers and make gender equality a reality in all sectors of influence. Riggs explained the gross inequalities between women working in high-level governance positions and their male counterparts, as well as in other power sectors like technology and finance. Through detailed research and fact-finding, the IGC exposes gender biases and aims to bridge gender disparities.

2. The Cities Program of the Natural Capital Project

French native Perrine Hamel leads the Cities Program of the Natural Capital Project from Paris. This project examines the benefits of having nature and green spaces in cities (e.g., trees, green roofs, urban parks, etc.) The program is international, in the US, Europe, China, and soon Latin America. Having spent over four years at Stanford University in California at the hub of the Natural Capital Project, Hamel continues, “It’s been inspiring to grow as a leader within this women-led organization. Our faculty director and managing director are women, and so are most of our lead scientists.” Hamel concludes, “Given political instability in many regions, it’s important that initiatives like the (Paris Peace) Forum help give visibility to collaborative projects like ours.”

Judith Ramadan is one of three project managers for the Global Perspectives Initiative (GPI) in Germany, founded by Ingrid Hamm. The Global Perspectives Initiative is a non-profit platform that inspires new ideas and raises awareness about the opportunities and challenges of a global society, aiding in shaping the public discourse in Germany. GPI supports the United Nations’ Sustainable Development Goals, which aim to make the world a fairer and safer place by 2030. Additionally, Ramadan and fellow team leaders of GPI in partnership with the Aurora Humanitarian Imitative have organized the distinguished Aurora Dialogues taking place this year December 11th and 12th in Berlin.

Nadia Sanchez Gomez, from Colombia, is the founder and CEO of the She-is Foundation which supports female war victims from Colombia with the first social brand of empowerment and the development of a social model. With deep enthusiasm for her cause, Gomez recounts, “It has been an experience to get to know upfront the pain of other women, feel it, understand it and transform it. As women, we see each other reflected in the experiences of others, and we stand together to strengthen and reinvent ourselves. … This is why, from She-is, the stories of the lives of women are enhanced, to give power to this transformation, and write new stories towards prosperity, peace, and abundance.”

A featured project at the Paris Peace Forum this year, Peace Village in Indonesia, discussed in a panel of women from around the globe and moderated by Ronja Scheler from Germany, recognizes that women have a great role to play in preventing and countering violent extremism. The Peace Village trains women in rural areas in Indonesia to become “peace entrepreneurs” and empowers them to help build harmonious societies regardless of religion, political view or gender. The idea of Peace Villages was conceived by UN Women and the Indonesian NGO Wahid Foundation and implemented under UN Women’s regional program, “Empowered Women, Peaceful Communities,” funded by the government of Japan.

See how to become a project leader or get involved at next year’s Paris Peace Forum 2019, here.