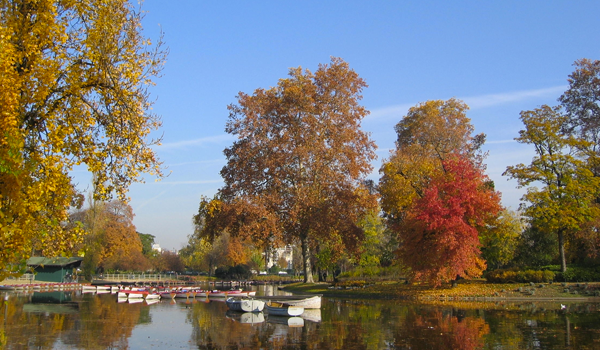 3 Days in the 12th Arrondissement

The 12th arrondissement of Paris—”Reuilly” to some—is a sleepy neighborhood at the southeastern corner of the Right Bank, with the lowest population density in the city despite an absolutely mid-range number of inhabitants for an arrondissement. The 12th reaches out across the boulevard Périphérique to encompass the Bois de Vincennes, the massive park—the largest “in” Paris, in fact—built by Emperor Napoleon III, which doubles the arrondissement’s already considerable size. Setting aside the Bois de Vincennes, the neighborhood is bounded on the west by the boulevard de la Bastille and the boulevard Périphérique on the east, the rue du Faubourg-Saint-Antoine in the north and the Seine in the south.

But what to do, what to see, what to eat and drink when you’ve only go three days to cover such vast terrain?

Well, let’s start with the obvious: the expansive Bois de Vincennes is, aside from just being a generally beautiful park to wander through aimlessly, absolutely filled with things to do. The Parc Zoologique de Paris‘s 36 acres of functionally extra-Paris preserve were designed with the idea of displaying exotic creatures in habitats that skewed more native than the accommodations for animals at the Ménagerie in the Jardin des Plantes. Lions? Check. White rhinocerous? Check. Penguins? Check. …midwife… toad? Check, although they’re clearly making that one up.

You could easily go for a verdant stroll on the Promenade Plantée (or Coulée Verte), a converted elevated railway that predates its twin in New York, the High Line. The Promenade offers three miles of scenic trail from Bastille to the Périphérique and a fantastic alternate route to the Bois de Vincennes and Parc Zoologique, with perhaps a stop at the Musée National de l’Histoire de l’Immigration, which may or may not interest you, subject-wise, but is housed in the Palais de la Porte Dorée, a stunning Art Deco exhibiton hall that’s worth a leisurely walk through.

There’s the slightly out-of-place looking Bercy Village, with its converted wine warehouses, is a bit of a respite from the sameness of Haussmann’s Paris, renovated in the 90s to become an upscale, outdoor shopping mall, complete with tony boutiques for all manner of clothing and high-end restaurants, and even the UGC Ciné Cité Bercy for those looking for a more total cinematic escape.

Unlike the heavily affected restaurant of the same name in Bloomingdale’s, Le Train Bleu in the Gare de Lyon is a staggering Beaux Arts masterpiece inspired by the renovations made to the Gare Saint-Lazare for—no surprise here—the World’s Fair in 1889. It’s a pricey little spot, of course, but the dishes—like the salmon starter with potatoes and salmon roe or the sales beef tartare entrée with Pont-Neuf potatoes—are well worth the extra scratch, especially in such a gorgeous setting.

For traditional French cuisine that somehow dodges the increasing trend of unaffordably priced bistro, À La Biche au Bois is the end-all, be-all of restaurants, with a menu of dishes that are prepared the way the chef would at his home, rather than a restaurant. There’s a delicious coq au vin, a steak frites with fries that don’t resemble aenemic shoestrings, seasonal selections of wild game, and your standard French desserts, all served in portions befitting a human appetite. And consider this: rather than a website, the restaurant simple sticks to David Lebovitz’s 2010 review of the joint.

It may be across the Faubourg Saint-Antoine from the 12th, but East Mamma‘s big portions of Italian fare and shelves upon shelves of Parmesan wheels on display have made it a neighborhood favorite nonetheless. The menu is seasonal, but you might find a carpaccio insalata, a four-cheese pizza with gorgonzola, mozzarella, caciocavallo, and bufalo ricotta, or fresh pasta with bresaola. You will always, however, find their fantastic bruschetta bar ready for service.

It might be travel guide sacrilege to waltz you right into a perpetually crowded bar, but Le Baron Rouge is so reliably awesome, as wine bars go, that a trip to the 12th would be incomplete without a visit. A stack of actual wine barrels are pilled in one corner, and bottles of wine crowd the shelves, but it’s the oyster nights that are bound to be the most packed, with the absolutely fresh mollusks.

For cocktails, Le Calbar is definitely a local favorite, although it’s hard to say whether that’s because of their ingenuity with updating classic drinks or the fact that the bartenders all work in a shirt and bowtie with no pants. If you prefer your pourers more thoroughly panted, you can cheat your way across the Faubourg Saint-Antoine again to Le Red House, a true dive bar serving cocktails with all the right flairs and flourishes, and a few you won’t see coming.