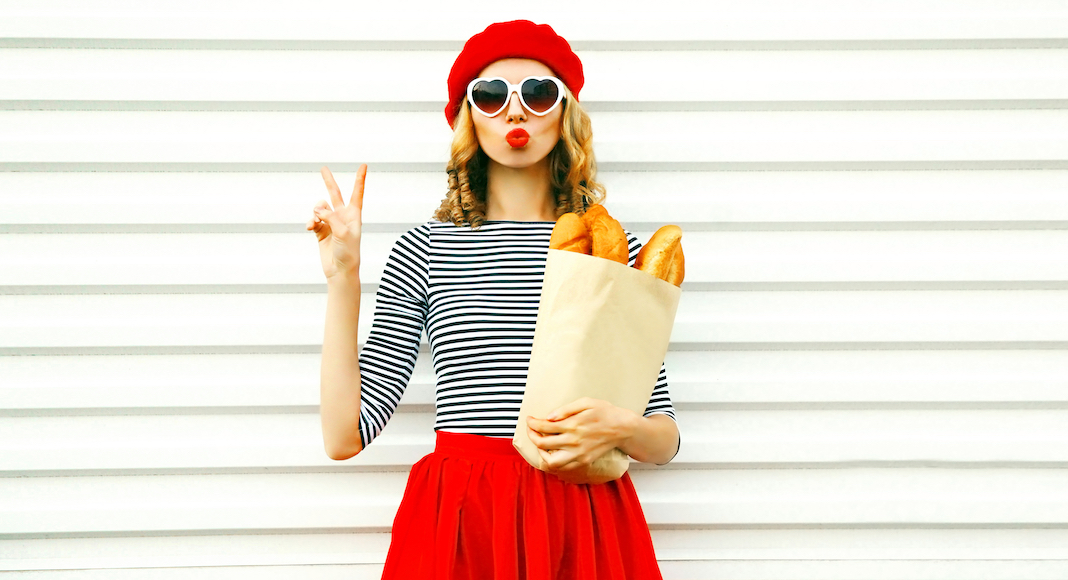 For a topical conversation starter:

A few weeks ago, a French YouTuber jumped on the Chanel runway to strut her stuff. Make this costume with a vintage Chanel suit (or something that looks vaguely like Chanel) with a black hat and bag.

The city is teeming with them; they outnumber people two to one. Dress up as a rat (don’t forget the tail), then draw on a little curly mustache and wear beret just so it’s clear your un rat parisien. Or, if you don’t want to be a stereotypical rat, put on a red lipstick and some Ray Bans.

The protests of 2018 and 2019 have mostly ceased, but the reference remains. Wear jeans and a sweater with a reflective yellow vest, and write something like “Macron démission” on the back in Sharpie. Draw a curly mustache on your face (or, if you can, grow one) to help the stragglers with the reference.

4. A member of l’Equipe de France

On est champion! Easy enough, get your favorite player’s jersey, some white shorts, socks and sneakers. Don’t forget to carry a soccer trophy.

It’s been months since the German-born, Francophile icon died, but the Chanel designer looms large in the fashion industry. Get a white button down, black tie and jacket, black gloves and black sunglasses. Pull your hair back, and consider carrying a stuffed cat.

For a historical costume:

The mother of France’s democracy! She’s depicted most famously in “Liberty Leading the People,” so model your costume after that (breast exposure optional). Wear a baggy red beanie and a neutral color sheet draped around your body, cinched at the waist with a red rope or ribbon.

A classic French-inspired costume. You can go historic or updated à la Kristin Dunst in the Francis Ford Coppola film. Don a poofy dress, big hair, and lots of jewels. Paint a bloody streak across your neck if you want to be the post-guillotine version.

Though these two are definitely American, it’s undeniably fun to dress up as members of Paris’s Lost Generation crew. Besides Zelda Fitzgerald and F. Scott Fitzgerald, Gertrude Stein and Ernest Hemingway are two other options. Stein requires a matronly look, Zelda should be styled like a flapper, and the two men would have suits and slicked-back hair (and notebooks, of course).

Similar to the Chanel runway crasher but much more elegant in a Chanel suit, pearls and a hat. Or you could don another signature look, the little black dress, accessorizing it with lots of pearls, a hat, watch and cigarette.

For a chic / cute alternative:

In this costume you’ll be the best looking person at the party. Wear jeans, ankle boots, a t-shirt, plain or with words on it, loosely tucked into your pants, and make your brows strong and your pout red.

Everyone’s favorite little fictional French girl. Put on a blue dress with a white collar, a red bow, a yellow hat with a black bow, white tights and black flats.

If you have a black bob and bangs, you’re halfway there. If not, pull your hair back in the endearing waitress bun or up in a little head scarf. Wear a red dress and a greenish-brown trench coat, plus a red lip and red nail polish (if you can’t wear raspberries on your finger tips all night, at least make them red). You could even wear the Zorro hat and mask if you want!

A cheap yet effective costume. Wear white clothing, a blue bracelet on the left arm, and a red bracelet on the right arm. Take a French flag and safety pin the color-corresponding stripes and bracelets together and the top of the white part to your shirt. (Note that the flag is facing the right direction to those standing behind you. If you want the flag to face the right direction from the front, switch the sides the bracelets are on and turn the flag around.)

Dark red, light yellow or pink clothing (depending on your cépage), a label pinned to your front and a cylindrical hat make up this easy Halloween costume.

This one requires a bit of sewing. You’ll need two round pillows, some ribbon or ruffles, and two straps of some sort. Sew (or pin) the ribbon around the pillows to create the filling coming out the sides, then attach the straps to one side of each macaron so you can hang the straps over your shoulders and become the extra layer of filling in your macaron. Miam!

This woman should win an award for her DIY effort, as should anyone else who attempts to make this masterpiece. You’ll need thin, lightweight metal pipes, wire, duct tape (to make the crossbars and hold the thing together), and some really narrow PVC pipe to use for the levels. And lots of time and patience.

18. The Gnome from Amélie

If you want to reference Amélie but in an obscure way that will have many people thinking you are the Travelocity gnome, dress up as the film’s traveling garden gnome sent around the world. Red hat, white beard, blue sweater, reddish-brown pants and boots. Carry around a few polaroids of yourself in different well-known locations in your city.

For a stereotype everyone will recognize:

A staple of every Bastille Day event. Black pants, black and white striped shirt, a black beret, white gloves, and face makeup to your heart’s content.

The upside of the stereotypical French girl costume is that at least everyone will know what you are. Put on a black (or black and white striped) shirt, jeans or a red A-line skirt with tights, ballet flats, a red beret, and red lipstick. Bonus points if you carry a baguette. The end goal is to look like a Shutterstock photo (see above).

A classic group outfit. Put your French mime outfit on, paint your face to look like those of the famous rock band KISS, then add berets and baguettes and red ascots.