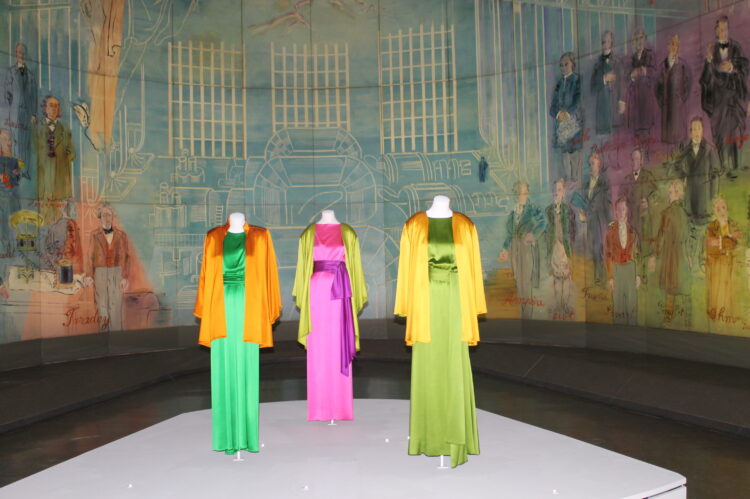 Yves Saint-Laurent is in Les Musées

France, 1962: Algeria becomes independent, the S.S. France begins her maiden voyage,  François-Henri Pinault (Pinault Collection) is born, Truffaut’s Jules et Jim is released, and on January 29th , a twenty-six year old Yves Saint-Laurent presents his first Haute Couture Collection. In honor of this event, which launched one of the world’s greatest designers, six Parisian museums are simultaneously exhibiting YSL couture fashions woven into their permanent collections. With Yves Saint Laurent aux Musées  those six, some of the most important museums in the world, are recognizing that YSL’s high fashion is, in fact, high art. “When I work, I am constantly thinking about art and painting,” Saint-Laurent was quoted as saying. 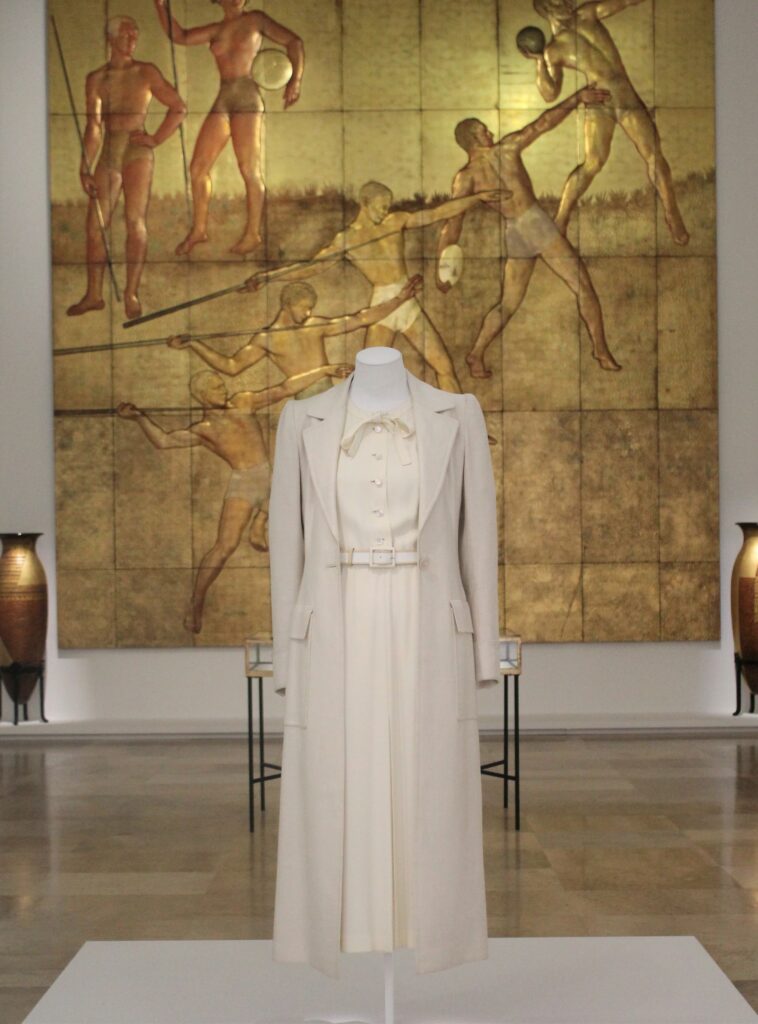 One of the things Saint-Laurent loved the most about Paris was its art museums. He said once, “my aim was to weave relations between painting and clothing.”  Now, these same museums, whose galleries Saint-Laurent wandered for inspiration, advance that aim by curating fashion pieces that seamlessly complement his designs with the museums’ own art collections. The result is Yves Saint-Laurent Aux Musées, a group of exhibits across six museums which runs through May 15, 2022.

Overall, the participating museums have done a masterful job of pairing YSL fashions with master works of art, some merely evocative of the fashions, others that served as direct inspiration.  A surprising number of the Saint-Laurent pieces pay overt homage to the painters housed in the museums, particularly those on display at Centre Pompidou and Musée d’Art Moderne. We really begin to understand in a palpable way which artists loomed largest in his psyche, and as Saint-Laurent put it, “I believe I have found [my aesthetic ghosts] in Mondrian, Picasso, and Matisse.” 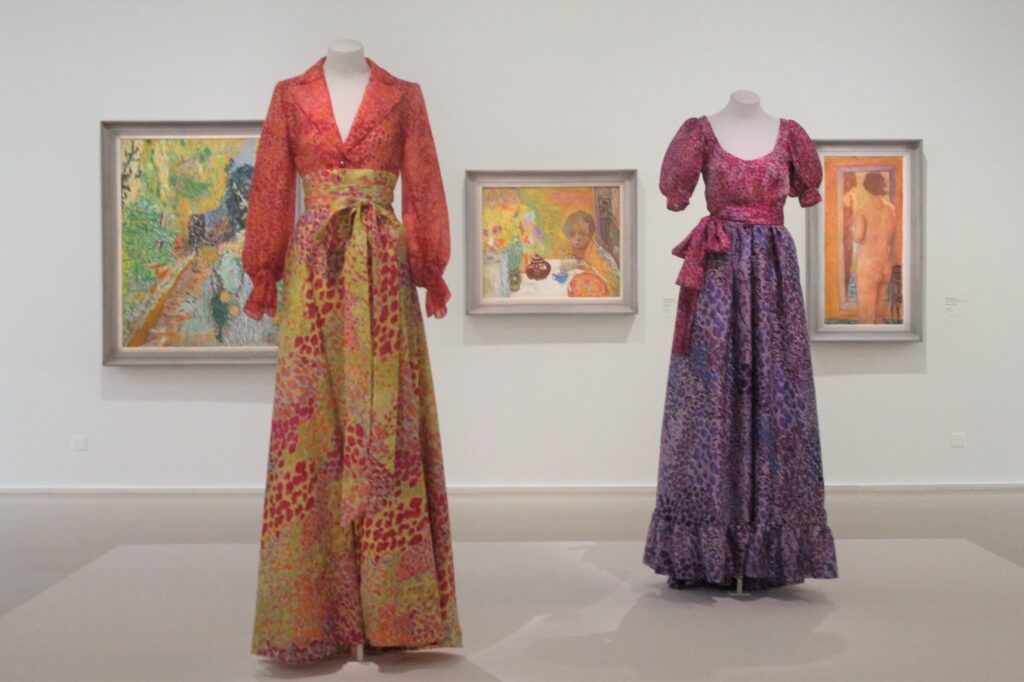 One truism I’ve learned living in Manhattan, and, and now in Paris, is that we rarely take full advantage of cultural offerings most available to us. I’m embarrassed to confess that two years into my life in Paris, I hadn’t ever visited any of the museums participating in the YSL exhibit. So here was the perfect opportunity to play cultural catch-up.  For me the YSL Aux Musées was like a golden thread that I followed, leading me through the galleries to rediscover exquisite museums and see the art in a new light.  Chatting with folks on my tour, I found a number of people similarly motivated.

Some of the participating museums have a gratifyingly robust number of YSL fashion pieces, while others disappointingly few.  Since there isn’t an all-inclusive pass, for those planning to visit in person, rather than approach this as  YSL show as a museum “tour,” I suggest choosing the museums you’re most interested in visiting anyway, and think of the YSL part as a springboard to appreciating the art, and his fashions, in a new light.  Here’s recap of each participating museum’s YSL collection:

For me this felt like the most substantive YSL couture exhibit among participating museums.  For one thing, it was spread out over two floors and numerous galleries. Most of the selected couture pieces  had clear and direct connections to the surrounding art works.  For example, Picasso’s “Arlequin et Femme au Collier,” (1917), is mounted right next to YSL’s “Robe Homage a Pablo Picasso,” (1979), and Piet Mondrian’s “Composition en Rouge, Bleu et Blanc,” (1937), hangs by YSL’s “Homage à Piet Mondrian,” (1965).  Lizzie and Bob, in town from London for the day summed it up best, “It kind of puts the fashion into context, doesn’t it?” 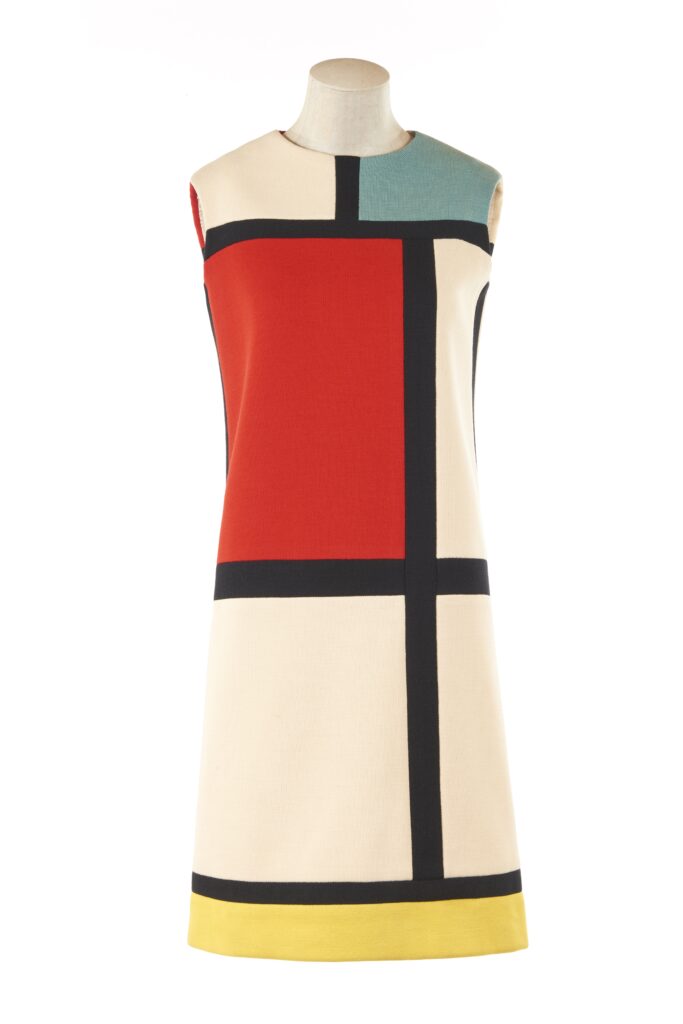 Julien, a young French fashionista sporting a Karl Lagerfeld tote bag told me that he came expressly for the YSL and planned to visit the other five participating museums. I asked him if the exhibit encouraged him to meander and discover the other artworks as well? “I’m from Paris, I’m familiar with them all, but this gives me an opportunity to reacquaint myself with the works here,” he shared.

The room with the most indirect connection to the accompanying artwork, and the most sensorially engaging pairing, houses the three YSL floor-length and lively gowns with dots, cubes and pleats. Colored light filters onto these dresses through ceiling-high colored plastic columns, on the other side of which, is a room-sized Op art installation with colorful surfaces that complement the YSL dresses. 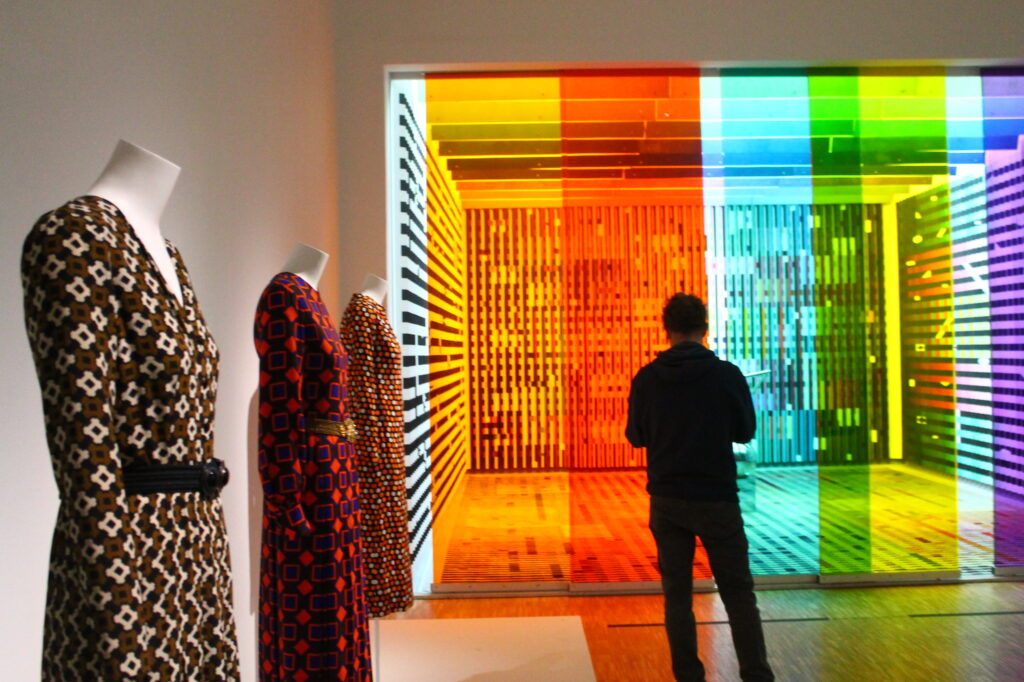 The pleated orange dress with striking swirls of color facing  Robert Delaunay’s Cochon merry-go-round (1922), a breathtaking painting with bright colorful spheres circling the canvas like rotating planets got my vote for coolest straightforward pairing at the Pompidou Center. Sophie, from Strasbourg, and her friend found it all exhilarating, “in each room there is such an atmosphere, it’s marvelously paired.” 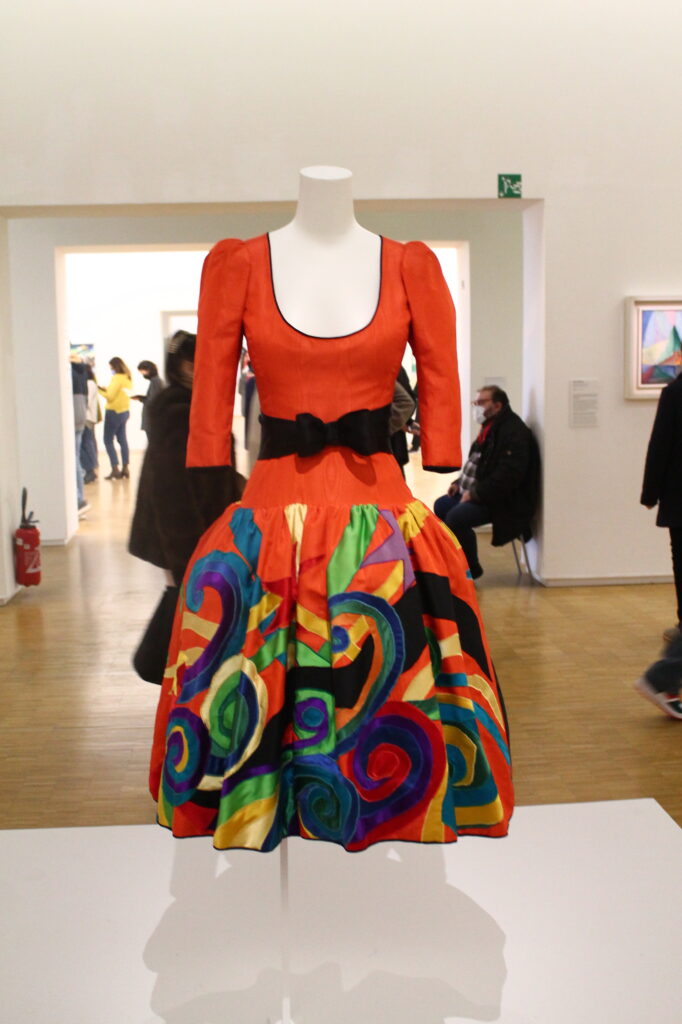 Ironically, the world’s largest museum has one of the smallest gatherings of YSL fashions of all six exhibits. But as Adelle, (who studies luxury management in Rome), and her mom, who came expressly for the YSL show, pointed out, “it’s a smaller exhibition than we hoped, but the eight pieces are of quality, and that’s what matters.” 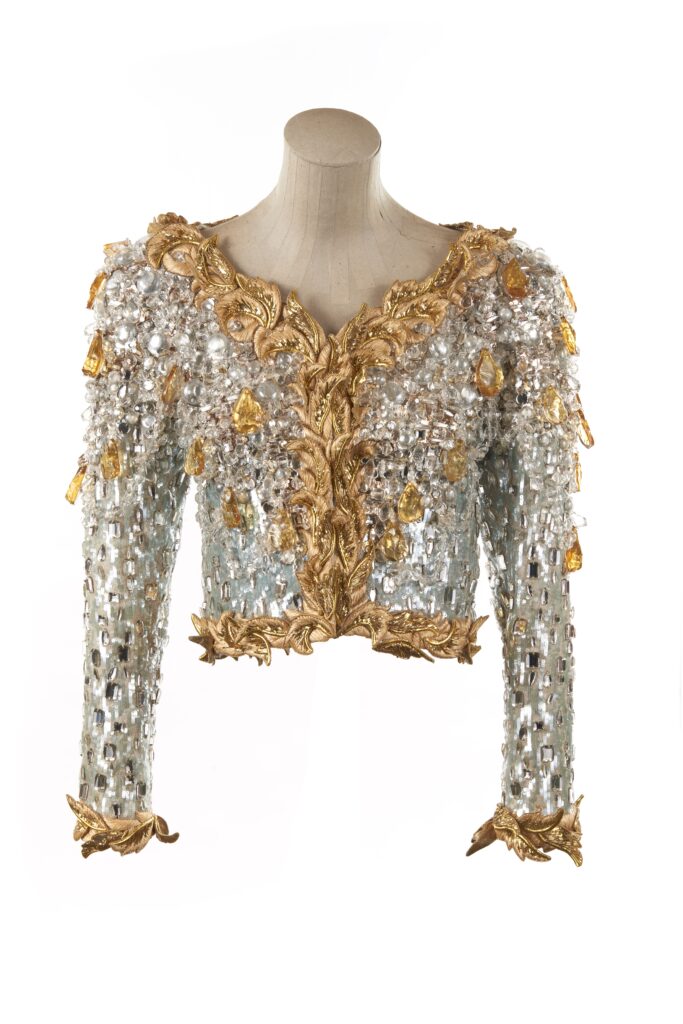 The Louvre’s Galerie d’Apollon, where the YSL fashions are discretely displayed, is an ornately gilded room of vitrines filled with 18th Century jeweled crowns, crystal tableware all fit for a king (which in fact they were)–a fitting forum for eight dazzling YSL beaded and jewel encrusted jackets (worthy of Michael Jackson) tops and jewelry. A jewel heart that was Saint-Laurent’s talisman, and was worn by a model at every runway show, sits alongside period museum pieces from across the centuries, here in the heart of the Louvre. 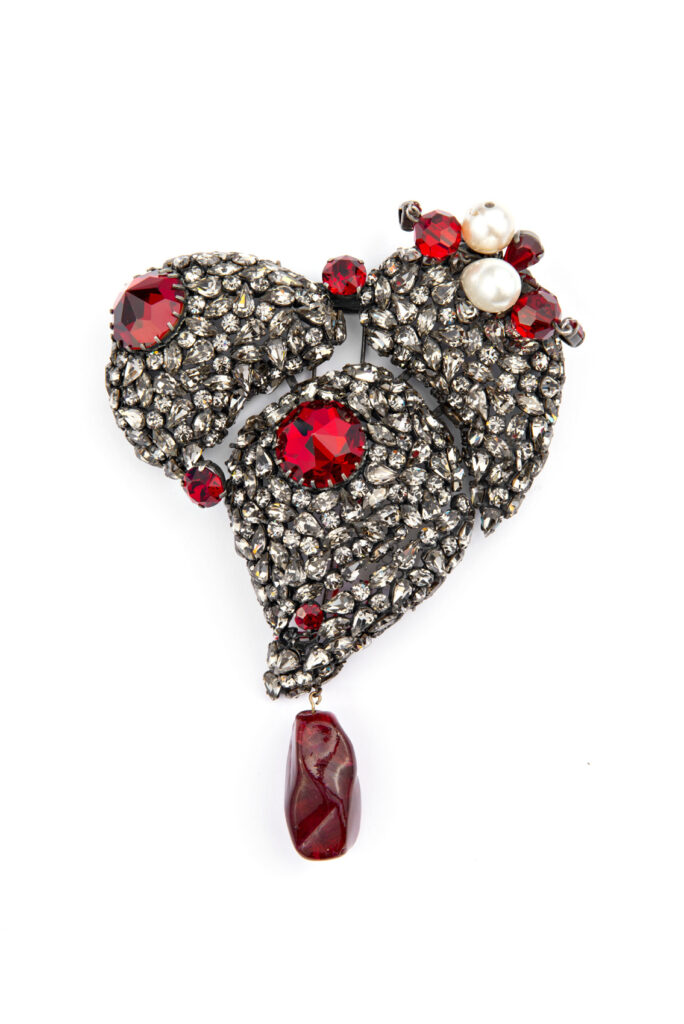 I had one of the biggest “wow” moments in the Salle Matisse (Matisse Hall).  An audacious juxtaposition of a lone YSL piece, a smock-like gown with rounded shoulders and cinched waist in blue-grey and black, against Matisse’s massive (8.5 by nearly 13 foot)  “La danse inachevée,” (The Unfinished Dance) from 1931–the only painting to occupy the large room. 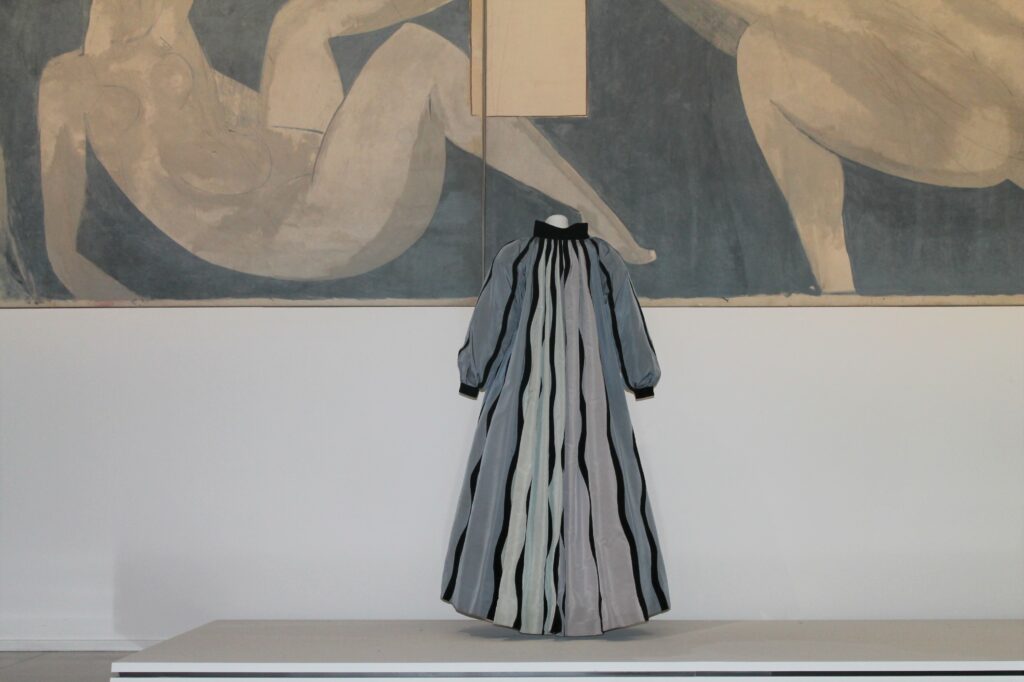 In a ground floor gallery I was admiring a pair of YSL pantsuits (one beige, one black) set in the middle of an extraordinary art-deco furniture collection, with Jean Durrand’s  wall sized mural, “Les Sports,”  (1935), which had hung in the smoking room of the S.S. Normandy, as a backdrop.  I struck up a conversation with Jeannine and Dominique, teachers who did not come expressly for the YSL, but who shared their take that, “both of these suits would have fit right in on elegant ladies surrounded by this furniture in its time.”

The one YSL display here features women’s black tuxedos alongside Belle Epoque inspired cream colored floor length dresses that were created for the Baroness de Rothschild and Jane Birkin to be worn at the 1971 Bal Proust, in honor of the celebrated author’s great work, In Search of Lost Time. The timeless tableau of manikins is aptly posed in front of the Orsay’s iconic ceiling-high clock, with the rooftops of Paris visible between the roman numerals.

The other YSL related room at the Orsay holds a small collection of his sketches for a revival of  Jean Cocteau’s play, The Eagle with Two Heads.  I was open-jawed with awe (and I don’t say that metaphorically), when I realized that the path  to the sketches took me through galleries 71 and 72 that house scores of the most iconic impressionist art works in the world. Van Gogh’s “Starry Night,” Van Gogh’s “Room at Arles,” and his “Portrait of the Artist”;  Manet’s Déjeuner sur l’herbe;” and Renoirs, too, to name a very few.  Thanks to the golden thread of YSL exhibits I witnessed Impressionism’s greatest hits. 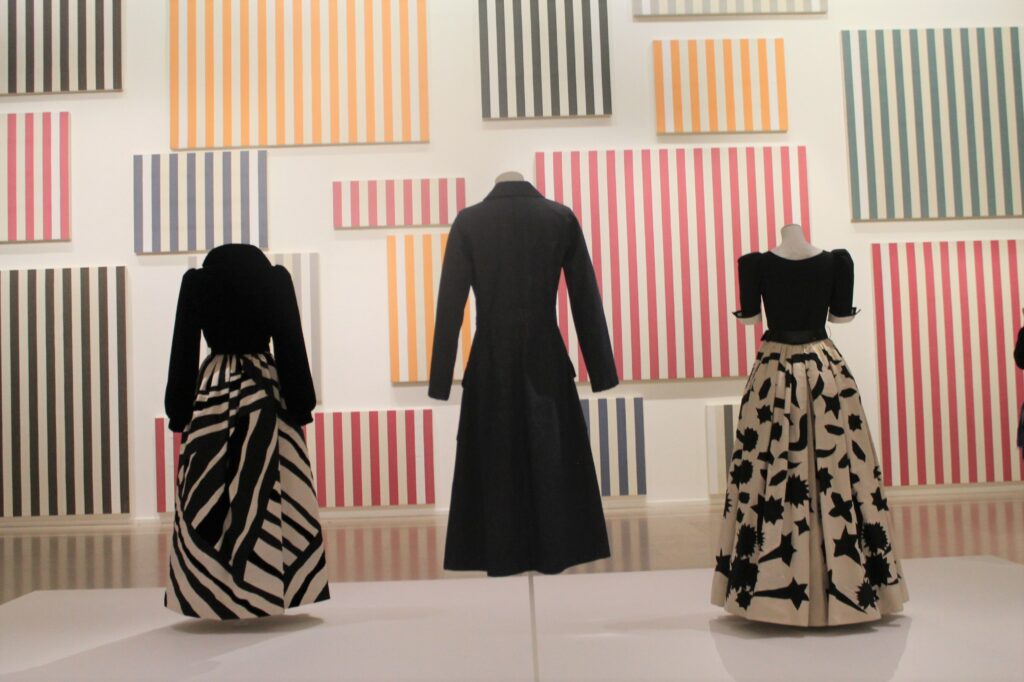 While this is a “must see” museum for modern art, with only two YSL pieces, it’s not recommended if your goal is to take in as much YSL couture as you can.  If you’re in Paris for less than a week, I suggest leave this gem for another trip.

Featuring YSL’s design sketches, cuttings, forms, videos and his in-tact personal atelier-study (staged as if he’d just been busy there this morning), this serves as the perfect preamble to visiting the exhibits at the other museums.  Here you get immersed in the creative process, gaining an understanding of how the stunning fashions displayed across the other five museums came to be. 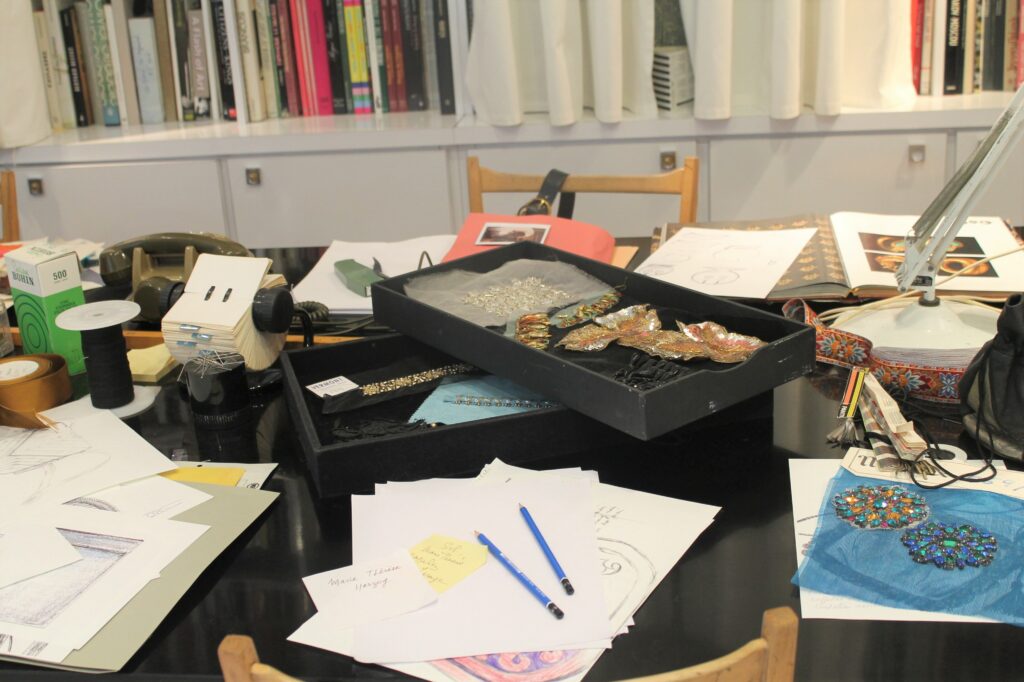