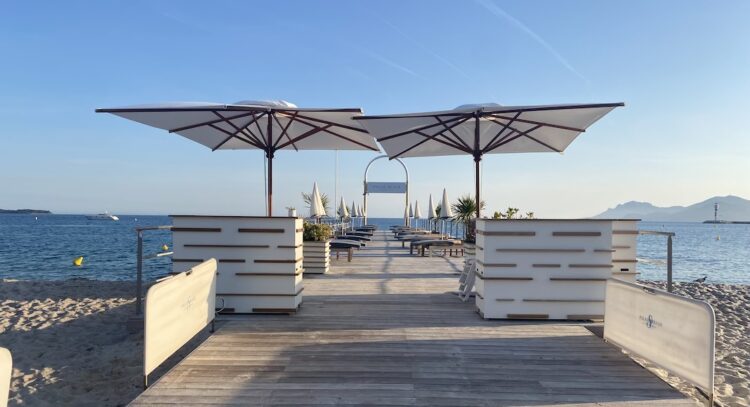 The South of France might conjure images of long, lazy summer days, where boredom is only interrupted by beachside bottles of wine and inappropriate romantic affairs. Think, And God Created Woman, or Bonjour Tristesse. But for the more active traveler, the proximity of the pretty beach towns along the Côte d’Azur makes the region ideal for day trips. Without any effort at all, you can bop about all over the Riviera without breaking a sweat. Here’s how: 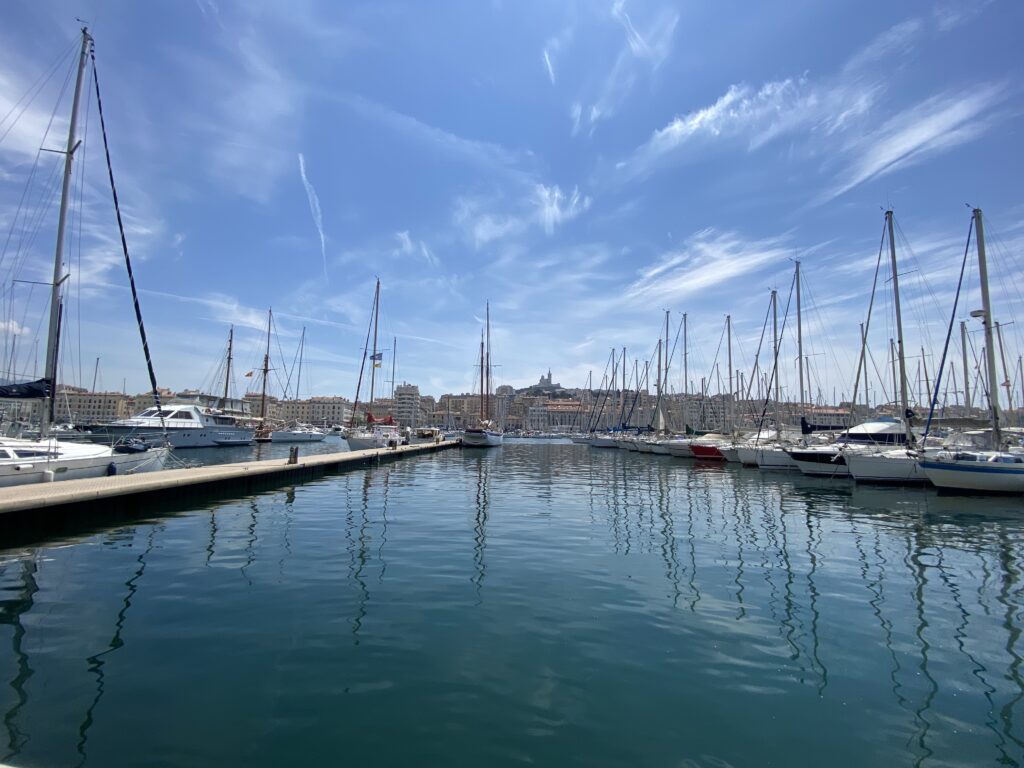 Marseille is an ideal basecamp for exploring the Riviera. France’s second largest city, Marseille is a busy port town that dates back to Roman times, and has been influenced over the centuries by Italian, Spanish, and North African cultures due to its role as a major trading hub. It’s cheaper than many other cities on the coast, and most trains in the region connect at Marseille Saint-Charles, so it’s perfectly positioned for those wanting as much access as possible. You could easily spend a week in the city, but it might serve you to set aside three days or so for Marseille, and the rest of the week for day trips. Here are some worth traveling out of the city for: 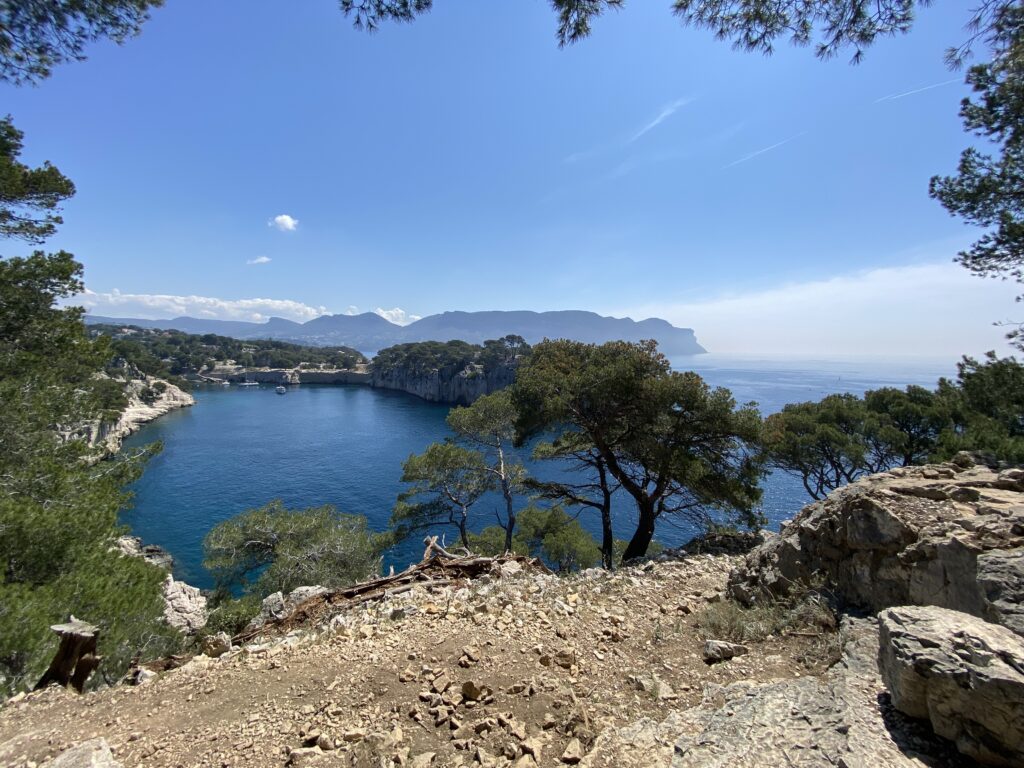 From Marseille, one of the best things to do is see the Parc National des Calanques, which sits in between Marseille and the village of Cassis. Calanques are a type of inlet walled off by steep cliffs on either side, a natural feature of the region. They’re beautiful for hiking and swimming in the clear blue waters, or seen from the deck of a boat.

There are two ways to see the calanques. The first, which is cheaper, requires a whole day. Take the M08 bus (which costs €2.20) from Marseille to the town of Cassis, then hike the trail through the three major calanques: Port Miou, Port Pin, and d’En-vau. Bring some proper hiking shoes, a bathing suit for Port Pin, and pick up a paper map at the tourism office, because you’ll lose service the second you reach the trail. Port Miou and Port Pin are light hiking and family friendly, but the trail from Port Pin to d’En-vau will require a little more hiking cachet. Check bus schedules in advance, because you could get stuck waiting several hours for the next one. (There is a train to Cassis, but the station is far from the town and the national park.) Cassis isn’t much more than a pretty little harbor, so if you end up waiting there’s not much to entertain yourself with aside from the beach and a few restaurants.

The shorter option is to take a cruise boat through the Croisières Marseille Calanques. The two-hour “essential” trip costs €25 roundtrip, while the three-hour “integral” trip costs €30. You’ll get to visit 6 calanques between Sugiton and Sormiou with the “essential” trip, and 12 calanques between Port Miou and Sormiou with the “integral” trip. In this version, you skip Cassis altogether, and can do as many calanques as you could possibly want in an afternoon. 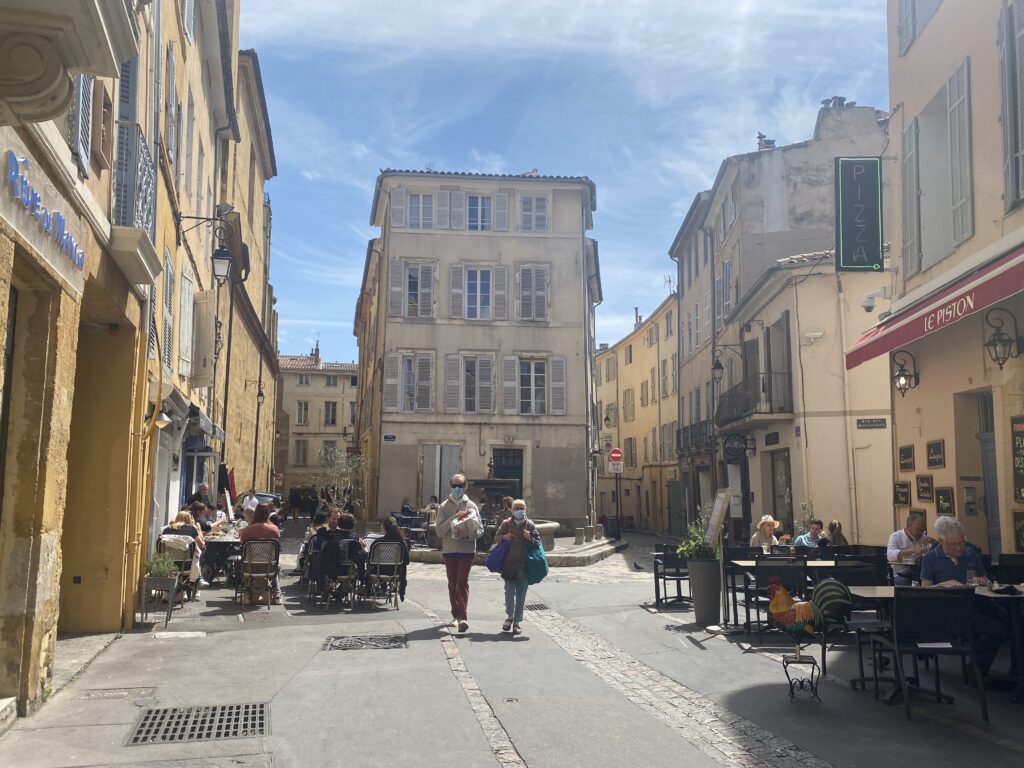 Technically part of the same metropolitan region, Aix-en-Provence can be viewed as Marseille’s snootier little sister. It’s about 45 minutes by train, or 30 minutes by bus (the L050). Aix is a beautiful little town, kept impeccably cleaned and preserved by a thriving tourism industry. The city center can be walked in about 15 minutes top to bottom, but it’s worth getting lost in for a day. Very posh and a little pricey, it’s set up for a walking tour in the morning (check their tourism office), a long lazy lunch, an afternoon of museums or shopping, and maybe an apéro or a light dinner before catching the train back to Marseille. 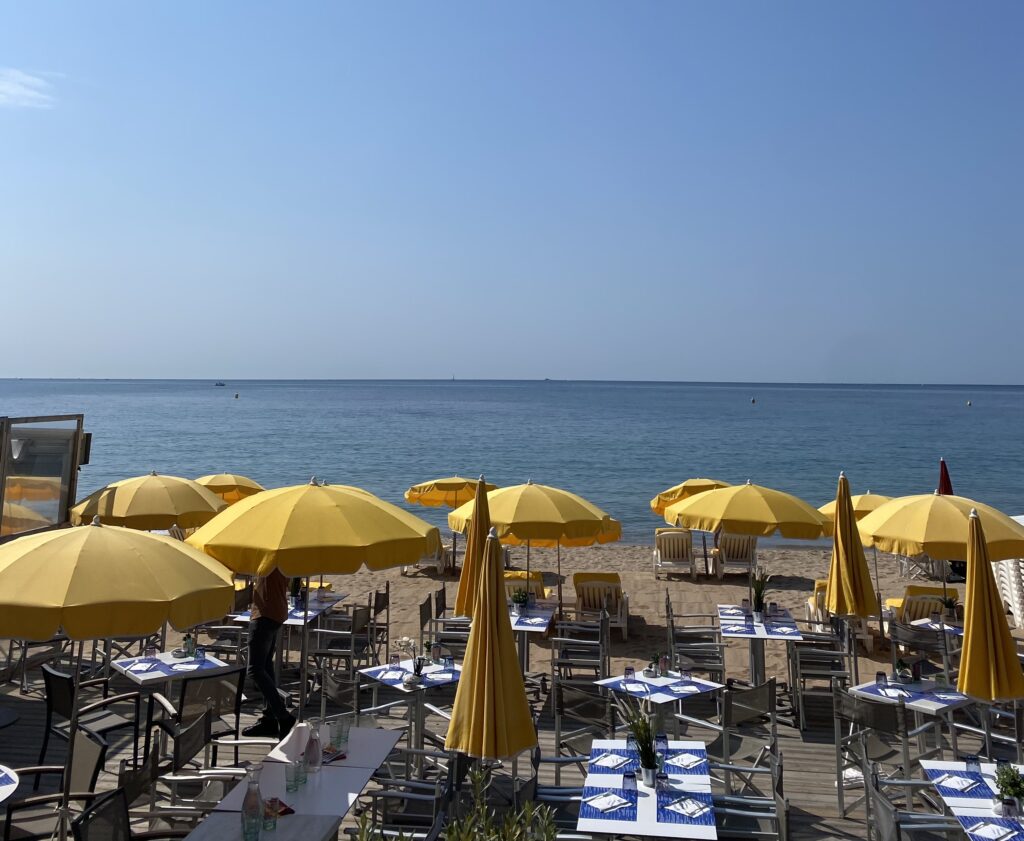 Glitzy, glamorous Cannes is known for its world-famous film festival in May, which kicks off the summer season with a bang. Pristine beaches dotted with restaurants where the beach umbrella alone will cost you a hefty fee make it a fabulous place to splurge for a weekend. But it’s also a convenient jumping off point thanks to the ferries that run from Cannes to places like Saint-Tropez and Juan-les-Pins during the high season. 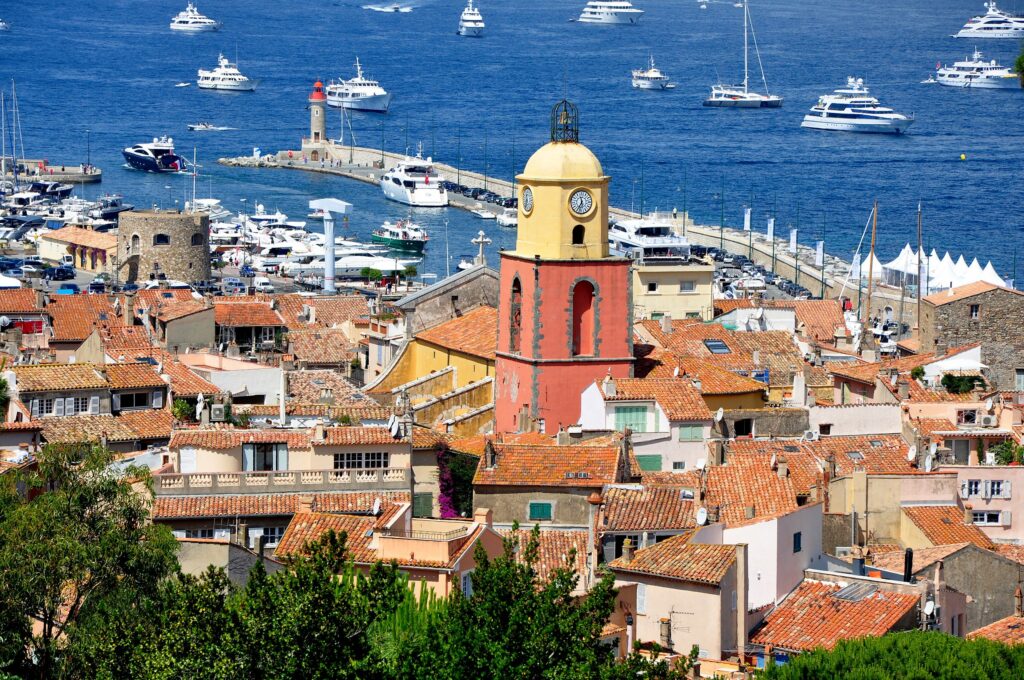 If you’re traveling without a car and dreaming about playing Brigitte Bardot in the resort town of Saint-Tropez, there’s only one main option to get there. From the end of May through the end of September (with only two trips per week in October and none in the winter or early spring), you can take a boat with the Trans Côte d’Azur ferry company from Cannes to Saint-Tropez. Depending on the month, there’s one ferry there in the morning, and one back in the evening, giving you about five hours to explore the town. It’s not cheap, at €55 roundtrip, and it’ll take you one hour and fifteen minutes each way. 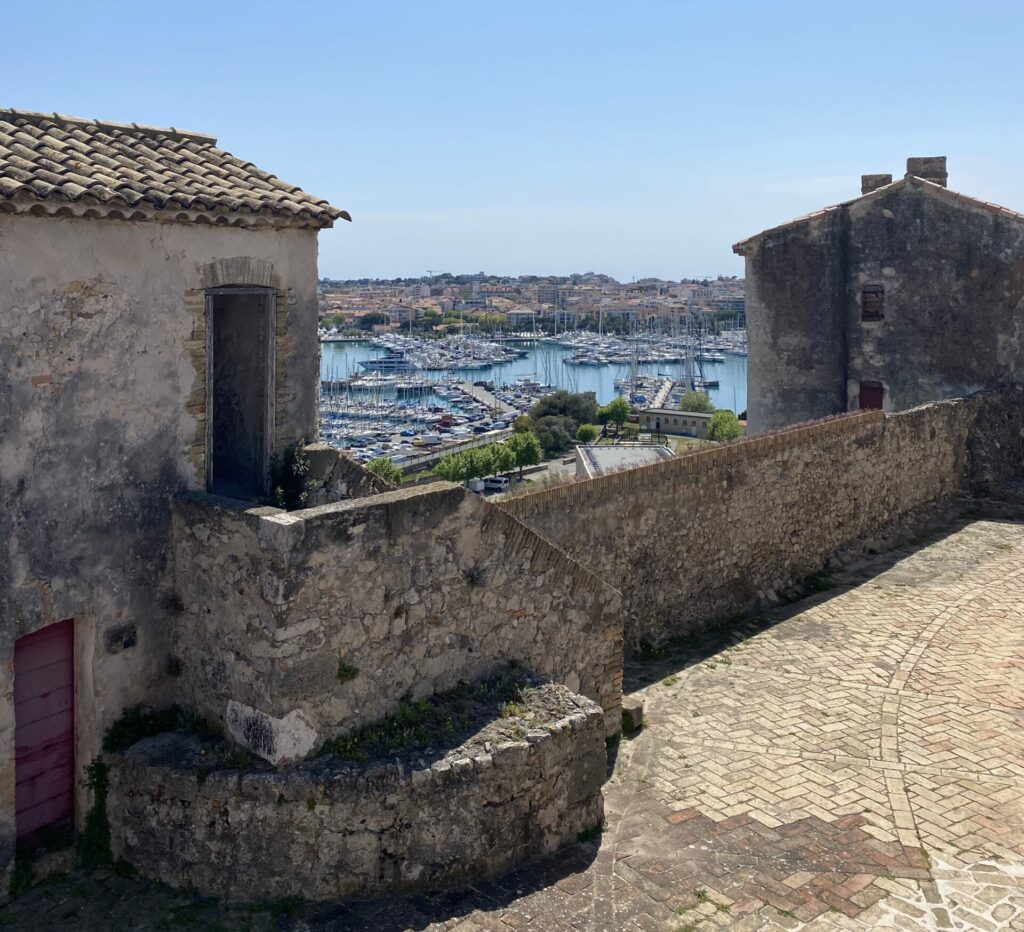 Halfway between Cannes and Nice, Antibes is less flashy but just as prestigious. It’s fifteen minutes from Cannes by train, and costs about €3 each way. The Port Vauban, where the wealthy stash their Maltese superyachts, is larger than you might expect, so take your time meandering around it. Spend the morning hiking up the trail to the medieval Fort Carré, before the sun gets too hot, and take in the postcard views from the top of the fortress. Climb back down and get lunch in the village, then spend the afternoon looking at art in one of the city’s many small galleries, or in the Picasso Museum on the water. Stick around for dinner, or head back to Cannes at any time. 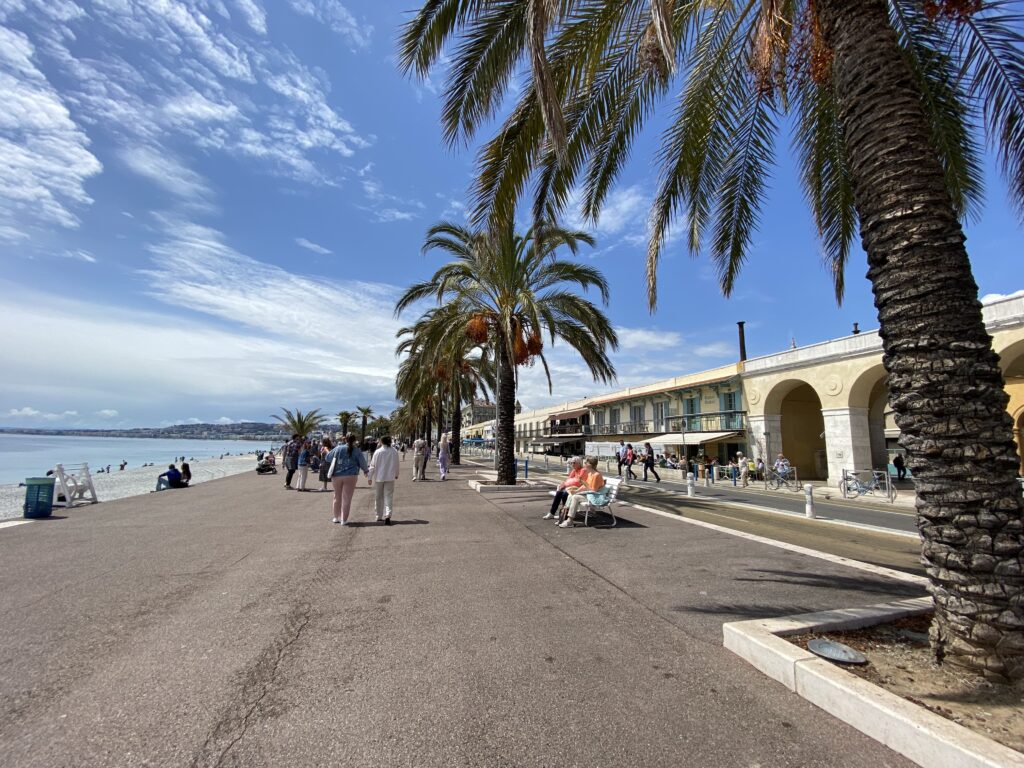 To complete the Riviera trifecta, once you’ve explored Cannes and Antibes, it’s time to go to Nice. Once a resort town for English and Russian aristocracies, Nice retains its old world, old money charm, while remaining true to the Italian, Corsican, and Occitan influences of the region. It shouldn’t take you more than two days to wander the Old Town, stroll along the Promenade des Anglais, snack on socca from a cart at the market, and try to get comfortable on the city’s rocky beaches. But it’s a good connection point for seeing some of the smaller villages on the Côte d’Azur. The best way to do this is to rent a car (the smaller the better), though driving up the narrow, winding cliffside roads, with their razor sharp turns, is not for the faint of heart. 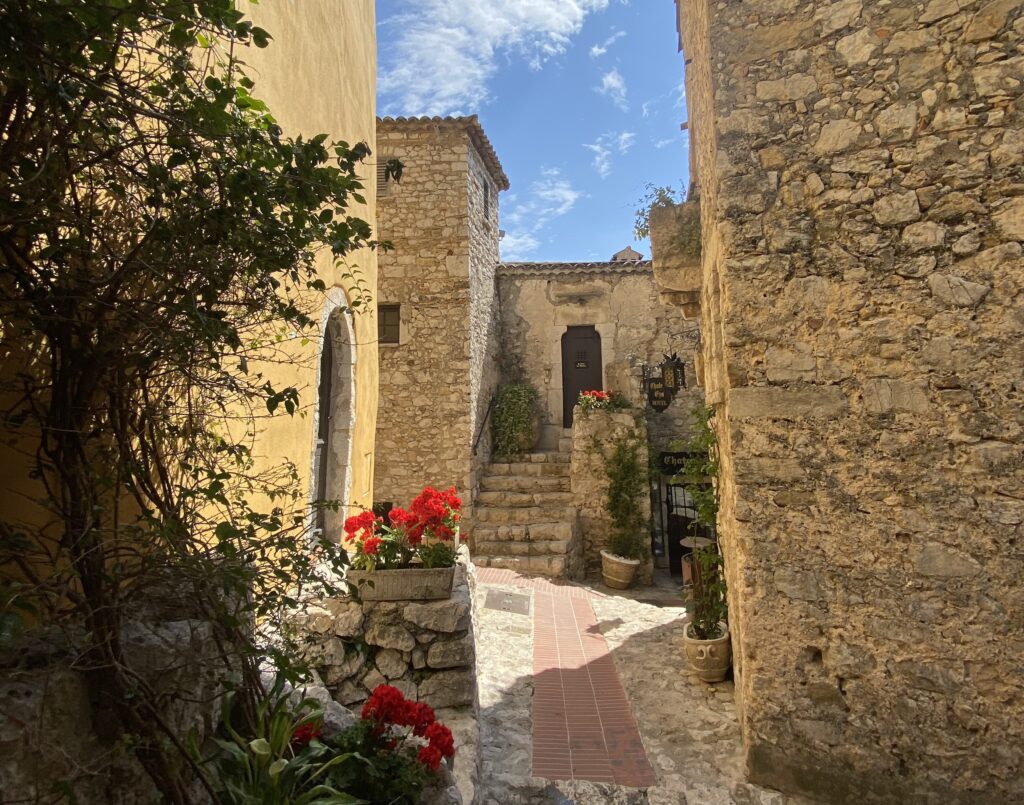 The medieval village of Èze is visible from a distance thanks to its hillside perch. There is technically a bus from Nice to Èze, but it drops you at the bottom of the mountain, and it’s an hour walk uphill from there, so you’re much better off going by car. It’s a truly magical place, with its tiny cobblestoned streets lined with stone houses, dripping with flowering vines. You’ll feel like you’ve stepped right into a fairytale, and you won’t want to miss the opportunity for a photo op. After you’ve spent the morning posing, stop at Deli’ for a delicious lunch, and don’t forget to pick up some local olive oil on your way out. (We mean it.) 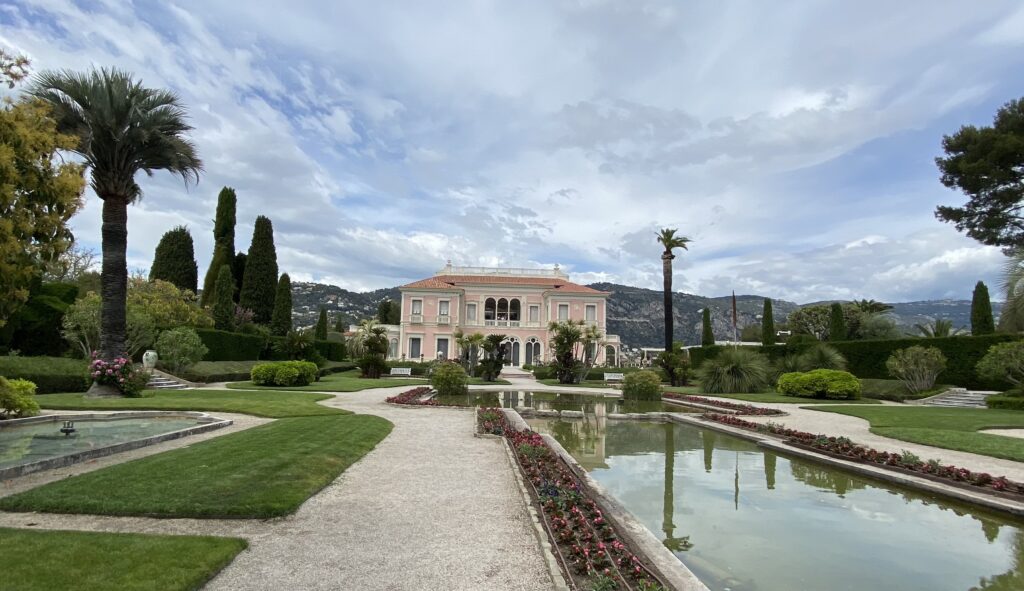 Since Èze can be done in half a day, use your afternoon to explore Saint-Jean-Cap-Ferrat, which is just a quick 15 minute drive south. Explore the Villa Ephrussi, a stunning pink Belle Époque mansion with expansive gardens, each inspired by a different country or theme. There’s also the “Greek Villa,” the Villa Kérylos, nearby. Finish up with dinner in Saint-Jean’s pretty little port. If you prefer an outdoorsy adventure, you can walk the trail around the peninsula of Saint-Jean, which takes roughly two hours, and gives you an option of beaches: the lowkey, local Plage des Marinières; or the upscale Paloma.

If you want to make a full-day trip to Saint-Jean, take the local train from Nice to Beaulieu-sur-Mer (about 10 minutes), do the villas in the morning, and save the hike or the beaches for the afternoon. 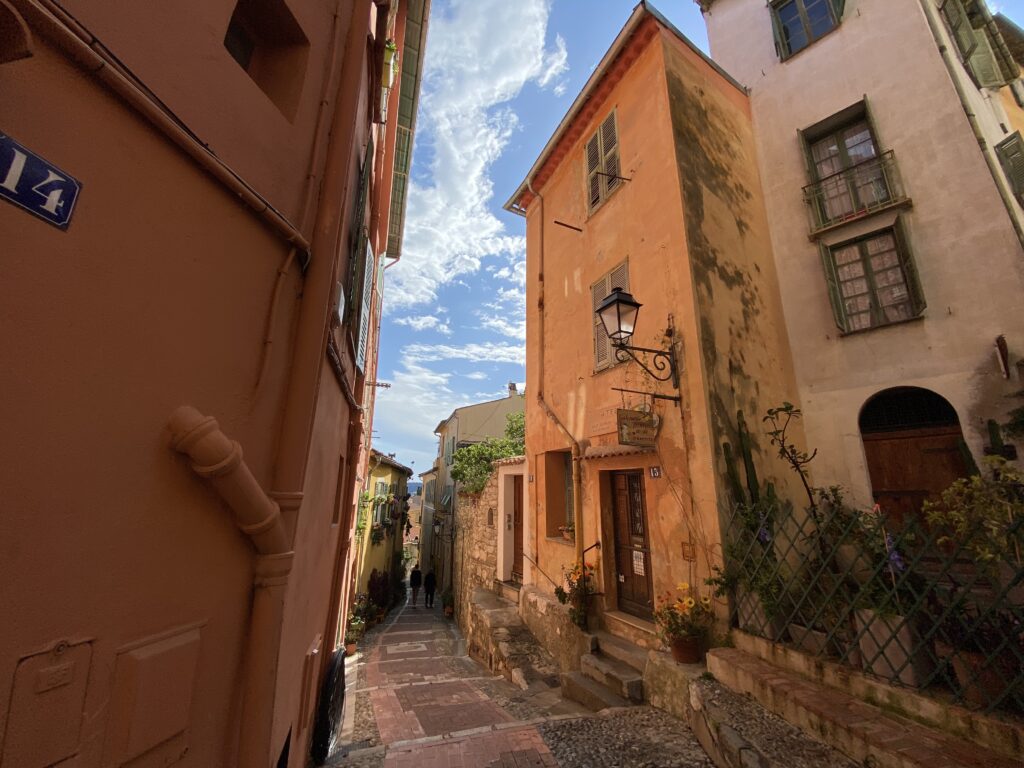 You actually don’t need a car to visit Menton from Nice, as you can take a local train that’ll get you there in about 40 minutes (about the same as the driving time). The bright reds, yellows, and oranges of the village’s houses, with their Italianate red tiled roofs, stand out strikingly against the rich blue of the ocean. It feels like stepping into a painting. Great for a half day of exploration and a gelato on the beach before taking the train back. 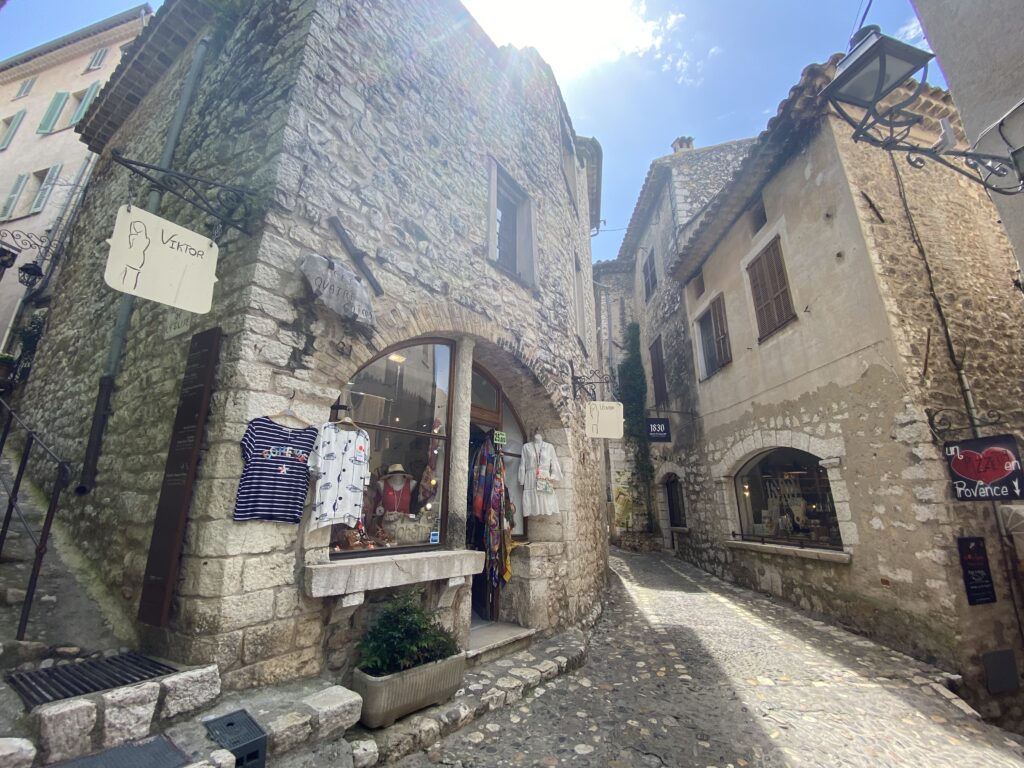 Another half-day adventure, Saint Paul de Vence is a gorgeous bonus trip if you have the time. With similar medieval stone architecture to that of Èze, it’s a surprisingly arty little town full of galleries and pop art that really “pops” in its anachronistic setting. It’s a 40-minute drive east of Nice, far from the sea but surrounded by picturesque forests dotted with larger, more modern houses. Walk in the footsteps of artists like Marc Chagall, who spent the last three decades of his life in this little town.

Catherine Rickman is a writer and professional francophile who has lived in Paris, New York, and Berlin. She is currently road tripping around France, and you can follow her adventures on Instagram @catrickman. All photos in this piece are hers, with the exception of Saint-Tropez, which was borrowed from Wikimedia Commons.