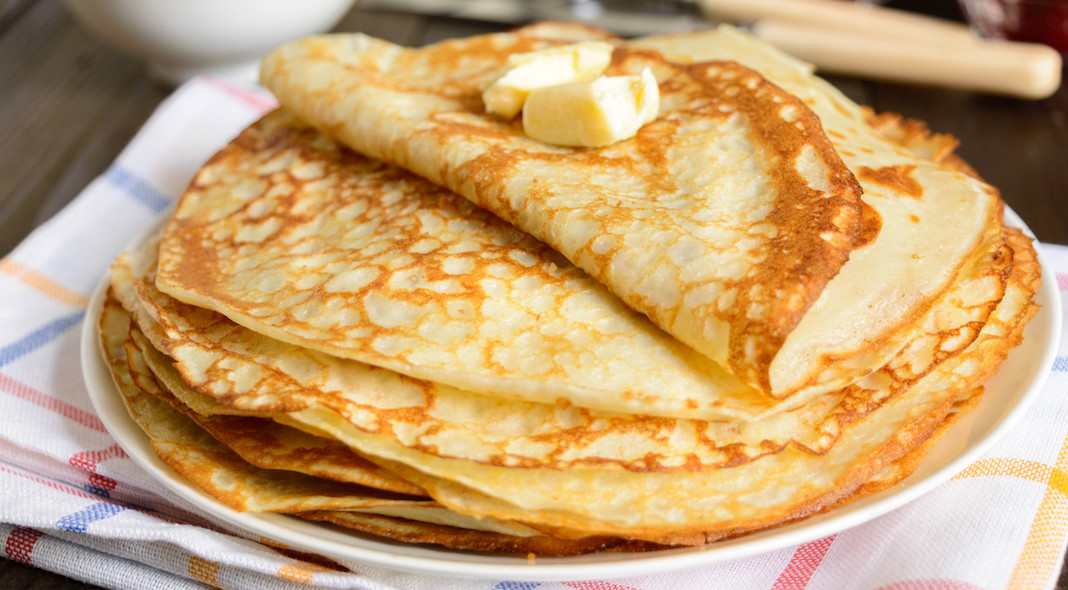 Why Do the French Celebrate La Chandeleur?

Every year on February 2 we have La Chandeleur, a holiday celebrated by eating crêpes… but where does this tradition come from? For the answer, we turn to turn to the history of this holiday, both secular and religious.

Before crêpes, there were chandelles (candles) — hence the name of the holiday, La Chandeleur, or Candlemas in English — and before the candles, there were torches. As it often does, the Christian religion attached one of its celebrations onto an old pagan custom. In this case, it would be the festivities related to the cult of Ceres, the goddess of the harvest, who wasn’t fertilizing the land for three months (i.e., the winter months). In Rome, in February, the return of the warmer days was celebrated with the festa candelarum, a popular festival with torch processions to celebrate the end of winter, which also evoked Ceres, torch in hand, seeking his lost daughter, kidnapped by Pluto, the god of hell. The idea is that light gradually overcomes darkness and death; the word February comes from Februa, the old Etruscan god of purification. It’s a month of transition between winter and the arrival of spring.

This same period was chosen by the Church to celebrate the presentation of Jesus in the Temple, an old Jewish tradition that requires the firstborn male to be dedicated to God. It was also associated with the Virgin Mary’s “reliefs” and purification, forty days after she gave birth on Christmas. The popes kept the Roman processions, but replaced the torches with holy candles: as early as the 7th century, a large ceremony was organized from the forum to the Basilica of Saint Mary Major, during which the faithful set out at dawn carrying candles. And there were so many pilgrims that it became customary to distribute galettes (buckwheat crêpes).

The tradition was born, with some variations according to customs and countries: beignets, crêpes, pancakes… we kept the habit of celebrating February 2 by taking pans out of the cupboards. “In France, farmers went to the morning mass to have their candles blessed, which they then brought back to the farm,” explains Jean-Louis Beaucarnot, author of the book Comment vivait nos ancêtres. “At the time, we were saturated with religion, our reality and actions were informed by the Christian faith. The candle acted like a talisman, it was the light that repelled darkness. It was taken around the stable before entering the rooms of the house, carried near family members, near the fireplace, above the beds… it had to stay lit, it was a sign of prosperity. If the flame went out, there was a risk of misfortune in the coming year. It was carefully kept in a drawer to be burned in serious circumstances, such as the death of a loved one or to ward off a bad storm…”

Galette, symbol of the sun

In the evening, we eat the famous crêpes, which also recall the light in their own way: they are round, warm, and their honey color reminds us of the solar disc that makes the crops grow. If they are tossed up high in the pan, it’s so they reach the sky, where the sun is located. Traditionally, they are cooked with the right hand, with a coin in the left hand to attract prosperity. The coin was then placed in the pancake at the back of a cupboard where it dried slowly, which predicted good harvests to come. Several variants existed, such as putting the crêpe on top of the cupboard and leaving it there all year to keep the famine away. Only one thing in common among all the traditions: dropping it was always a sign of a curse. So a word of caution to the clumsy people… don’t drop the crêpe.

This article was written by MARC FOURNY and originally published on Le Point.