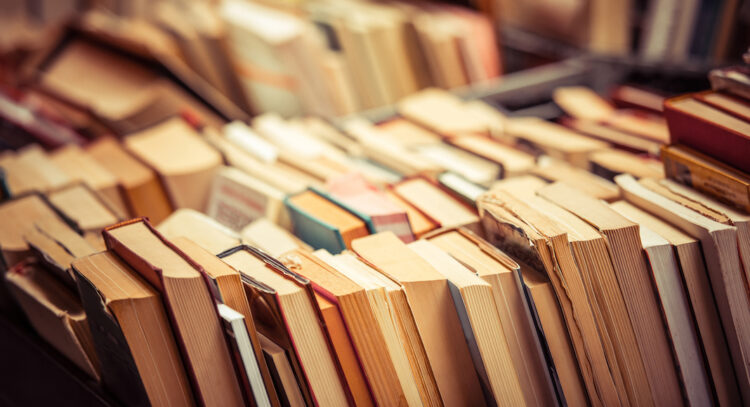 A good book is one of the best traveling companions. It doesn’t require an internet connection. It can help set the mood for a new destination. And for solo travelers, it’s a more reliable source of stimulating entertainment than whatever your Tinder passport feature is able to procure you.

But where’s a backpacker to go when their two-hour layover turns into a ten-hour layover, and they’ve finished their beach read before La Croisière is even in sight? Here are a few options for bookstores stocking English-language reads in France, as well as some ideas for what to pick up while you’re there.

There’s no shortage of things to keep you occupied in the sprawling, cosmopolitan city of Lyon, but the city’s size means there’s that much more to learn about it. Visit Damn Fine Bookstore for fresh picks in English, German, Italian, Spanish, or Portuguese, served with a side of coffee at their cozy cafe.

What to read in Lyon: Dirt: Adventures in Lyon as a Chef in Training, Father, and Sleuth Looking for the Secret of French Cooking by Bill Buford (2020)

What better way to dig into the muck of France’s gastronomical capital than with a book that explains exactly how the andouillette sausage gets made? Bill Buford’s memoir about moving his family from the U.S. to Lyon to work in a Michelin-starred restaurant is a must-read.

2. Book in Bar in Aix-en-Provence

An hour outside the major port city of Marseille, nestled in Provence just north of the Côte d’Azur, Aix-en-Provence has long attracted expats, students, and lit nerds. Tucked away in a tiny side street, Book in Bar is a great place to shop for new releases, and meet other Anglophones while having a coffee and a slice of cake in their on-site cafe.

Fisher was one of the great American food writers of the 20th century, and was drawn again and again to the twin cities of Marseille and Aix-en-Provence. This two-part memoir, complete with maps, delves into the gritty, international Marseille, and the quaint, posh town of Aix, with an emphasis on food, culture, and history.

One of France’s underrated southern cities is the university hub of Montpellier, whose vibrant student population makes the city one of France’s most progressive, trendy, and international spots. Le Bookshop, Montpellier’s resident English-language bookstore, is located on a sloped side street that is one of the city’s most-photographed. Find a book and watch the hustle and bustle of the city from a seat on their shaded terrace with a coffee in hand.

What to read in Montpellier: Perfume: The Story of a Murderer by Patrick Süskind

This famous novel about a perfume expert with an uncanny olfactory ability and an unnatural obsession starts in Paris and ends in the perfume capital of Grasse. But it makes a few stops along the way, including in Montpellier, which has its own rich history in the world of perfume.

Bordeaux is a popular travel destination for Brits looking to indulge in the region’s fine wines, and the city also houses a strong British expat community, so it’s not too strange to hear a bit of English when strolling the beautiful historic streets. Bradley’s Bookshop caters to French folks learning English with educational and bilingual materials, but the store also stocks current English-language titles for the native Anglophones.

What to read in Bordeaux: The Summer Queen: A Novel of Eleanor of Aquitaine by Elizabeth Chadwick

The fascinating figure of Eleanor of Aquitaine is one of the defining historical players in Bordeaux’s history. The queen, at different times, of both England and France, lived a life truly wilder than any fictionalized account could compare to. But Elizabeth Chadwick’s well-researched trilogy based on the eccentric queen’s story makes a valiant effort.

Between Cannes and Nice lies the charming resort town of Antibes, which is all old world with even older money. The red-tiled roofs of Vieil Antibes house art galleries and independent shops, among them Antibes Books. This small English-language bookstore stocks new releases and Riviera-themed classics, along with puzzles, board games, and greeting cards.

What to read in Antibes: Tender is the Night by F. Scott Fitzgerald

Fitzgerald’s last novel, Tender is the Night follows a glamorous and self-destructive community of expatriates haunting the South of France in the heyday of the Roaring Twenties. Set yourself up at a beachside cafe on the Riviera and travel back in time through one of the Mediterranean’s darker stories.

6. The Bookshop in Toulouse

Though The Bookshop was created as a resource for librarians looking to stock English titles, the store in Toulouse’s Old Town now offers books in 48 languages. Toulouse is, after all, a college town, so it’s not surprising that the city has a place where you can find fiction, non-fiction, childrens’ lit, and even bilingual content.

What to read in Toulouse: The Little Prince by Antoine de Saint-Exupéry

Toulouse was where the world’s greatest pilots trained during much of the 20th century, among them Antoine de Saint-Exupéry. The pilot and adventurer is known now, of course, as the writer of the seminal classic, The Little Prince, a childrens’ book that speaks to readers of all ages. The Little Prince’s adventures were inspired by the dangerous airmail route Saint-Exupéry flew between Toulouse and North Africa in the early days of aviation. Pick up an English translation or a bilingual copy.