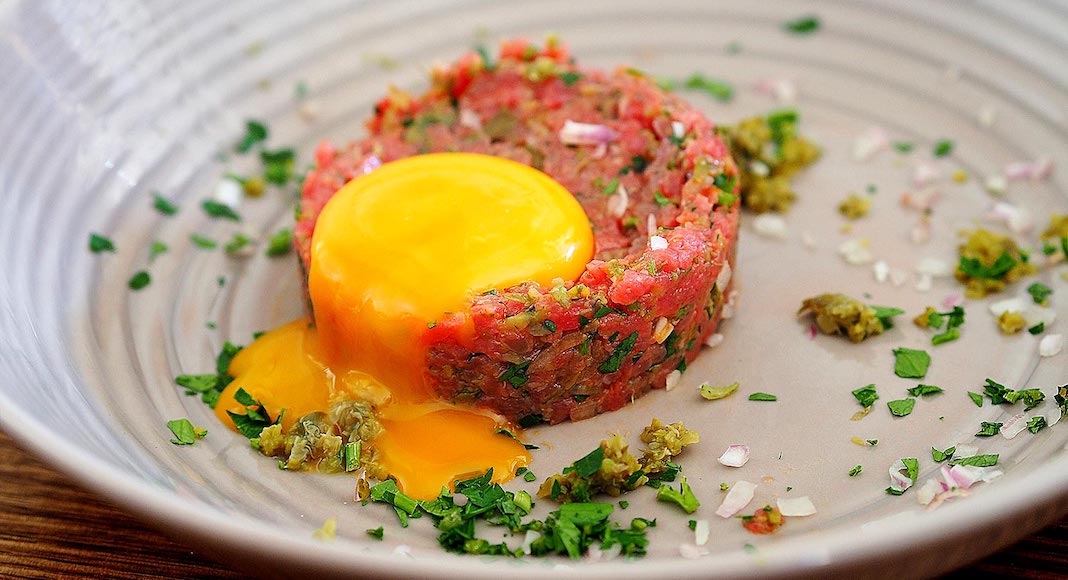 Where to Get the Best Steak Tartare in New York

A delicacy passed down from the 17th-century Tatars, a nomadic people from Central Asia who used to dry raw horse meat under their saddle, steak tartare has since undergone significant change, and has found its heightened reputation within French cuisine.

“It’s a typical bistro dish like escargots,” says Pierre Landet. Originally from Toulouse, the chef at Félix restaurant in SoHo serves one of the best steak tartare in New York. “It all depends on the quality of the beef and the seasoning,” explains the Frenchman, who was inspired by a traditional recipe his father prepared when he was young. “I mix capers with shallots, pickles, mustard, olive oil-based mayonnaise, ketchup, Worcestershire sauce, tabasco, olive oil, parsley and, finally, a raw egg yolk.”

Enjoyed as both a starter and a main course in New York, this traditional dish makes French meat lovers salivate with a twinge of homesickness and Francophiles plan their next trip to l’hexagone. To please the palate in New York, Frenchly tested steak tartare all over the city. Here are some of the best.

This is our favorite of the list. Opened in 1980, this American restaurant in Tribeca imitates a Parisian brasserie. Its menu bridges the gap between the two countries with its hamburgers listed alongside classic French dishes such as a croque monsieur, Niçoise salad, soupe à l’oignon and a traditional steak tartare worthy of France’s finest restaurants. It’s available as a starter for $19, and as a main course with fries and bread for $30. We liked its fine and tender meat (Black Angus) and its perfect seasoning of capers, pickles, shallots, egg, Tabasco, mustard, garlic, and vinegar. The chef adds a pinch of crunchy fleur de sel on top. A real delight that goes perfectly with a good glass of Côtes-du-Rhône or Bordeaux ($15). — The Odeon, 145 W Broadway, (212) 233-0507.

Boucherie is a chain of French brasseries opened by a Serbian man who is passionate about France and its cuisine. There are three restaurants in New York: one in West Village, one in Greenwich Village, and a small venue that opened in February 2018 near Union Square. In the kitchen, French chef Jerome Dihui prepares well-executed classics such as black pudding with apples ($20), frog legs in parsley ($22) and beef bourguignon ($49). Steak tartare is available as a starter in “small portion” ($25) or “large portion” ($31). Fresh, well prepared and balanced, it’s served with a salad and toasted bread rolls with butter. We enjoyed this traditional recipe made with capers, shallots, and parsley, as well as the quail egg to break over top. A glass of Cabernet Sauvignon as an accompaniment is $17. — Boucherie, 225 Park Ave S, (212) 353-0200 / 99 7th Ave S, (212) 837-1616 / 14 Christopher St, (646) 756-4145.

This French restaurant in Hell’s Kitchen celebrated its first anniversary in June 2019. The menu, prepared by Chef Angelle, includes French classics such as duck breast, mussels and french fries, and steak tartare served as a starter for $14. Here, the dish is revisited with an aioli and paprika seasoning, and served with small pieces of grilled Jerusalem artichoke on top, with pickles, a homemade hot sauce and homemade chips as a side. An original but very successful take on the dish. — Le Privé, 626 10th Ave, (212) 837-2795.

Pierre Landet has been directing the kitchens of this SoHo restaurant for seven years. Steak tartare is prepared in accordance with the finest French traditions and served as a main course with fries and a green salad ($24). And a little shout out goes to the grass-fed, antibiotic-free cattle that is raised in Kansas. The chef’s specialty is also cassoulet ($33), for which Landet won an award in 2016 and 2017. In the evening, Félix pushes the tables together and turns the space into a dance bar. — Félix Restaurant, 340 W Broadway, (212) 431-0021.

In Georges Forgeois’s French bistro, the steak tartare, meticulously chopped by hand, is served with a salad, savory fries and an egg on top that together create a perfect balance of flavors. Expect to pay $20 or $29 for the dish. It appears alongside other great French cuisine classics, such as duck breast, steak frites, and cassoulet from Toulouse. Jules is the perfect place for a date. The bistro has had live music every night for the past 26 years in the subdued and sexy atmosphere of its slightly hidden restaurant… It’s a spot seemingly from another era — Jules Bistro, 65 Saint Marks Place, New York. 212 477 5560.

The wine bar that likes puns (with five addresses in New York) serves a notable steak tartare for $18, also chopped by chopped. At its Upper West Side location, a small warm space that can accommodate about thirty seats, the dish is served as an appetizer in a bowl, topped with an egg yolk and served with a salad. Take the opportunity to order a glass of wine from the vast selection of French offerings. — Vin sur Vingt. 66 West 84th Street. 646.895.9944

The Japanese also have their version of the steak tartare. In this small restaurant in West Village, the meat is cut into thin slices with a knife, then prepared with a mixture of capers, seaweed, sesame seeds, and a spicy sauce. The dish arrives with a quail egg on top, which the waiters themselves take care of mixing with the tartar on your plate — an Instagrammable moment for sure. This is a good, flavorful steak tartare that will surprise any purist. — Takashi, 456 Hudson St, (212) 414-2929.