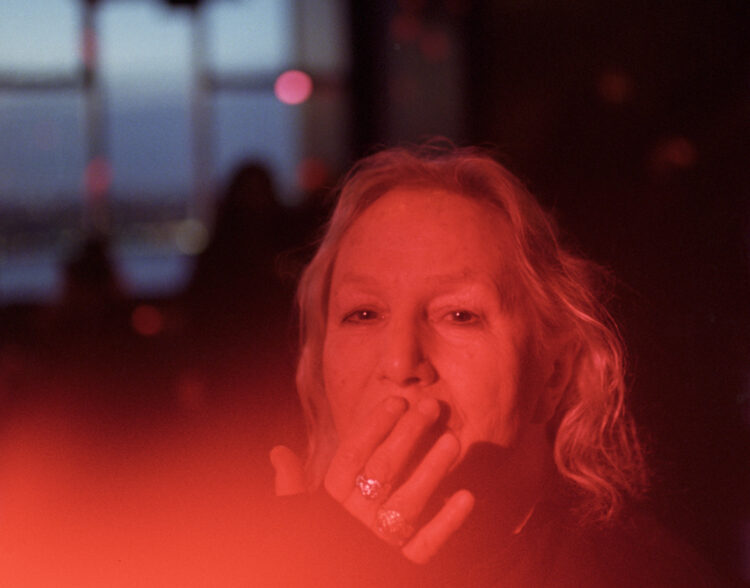 The iconic fashion designer, agnès b. (née Agnès Troublé and known as either just Agnès or agnès b.), also an environmentalist, philanthropist, art collector, artists’ mentor and patron, filmmaker and artist—mon Dieu!—has a new show opening in New York City today. The exhibit, on display until November 20th at the agnès b. Galerie Boutique on Howard Street in Soho, features a series of photographs she made during the worldwide shutdown of the early pandemic in spring, 2020. 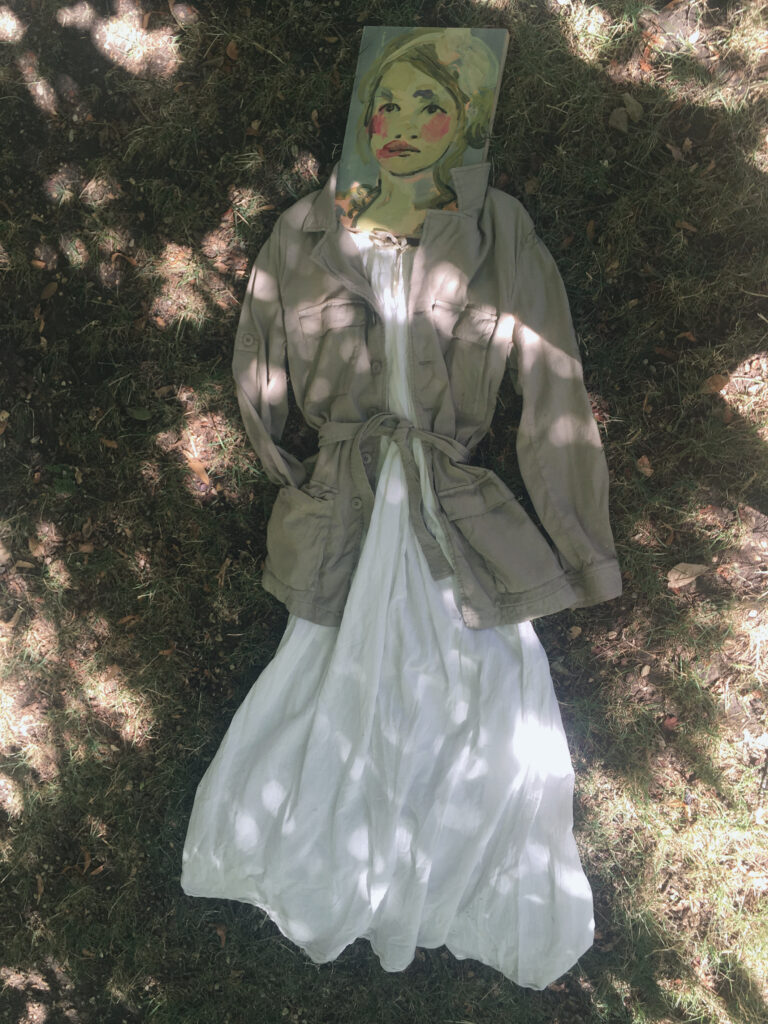 The artist spent those first two and a half months of Covid alone at her home in Versailles. The house is, by her own admission, an unusual place: It’s a two-story manor, profiled this month by Elle Décor, that was once owned by Louis XIV, who then gifted it to his personal doctor, Guy-Crescent Fagon. The house has a distinctly French look: louvered windows and doors with wooden shutters that are painted a classic, dusty French blue, with dark hedges and a network of private passageways. agnès b. spoke to me by phone this week and said, of her house, “It is a very inspiring place. Everything in it is about my life. I have pieces [of furniture and art] from my grandmother and works by Jean-Michel Basquiat and Nan Goldin. The artwork on the walls is very autobiographical [for me].”

One day that scary and isolating spring, agnès felt herself drawn to two paintings she had purchased in 2016 by the LA-based French figurative painter, Claire Tabouret. They hung in her front hall, by the door. On a whim, agnès took the portraits—both of young women—down from the wall. She explained, “I’ve been working with models all my life as a stylist.”  The subjects of the portraits, she said, looked like “naughty girls, rebel girls,” and she felt a sudden connection to them, as if they had become her “two friends during lockdown.” 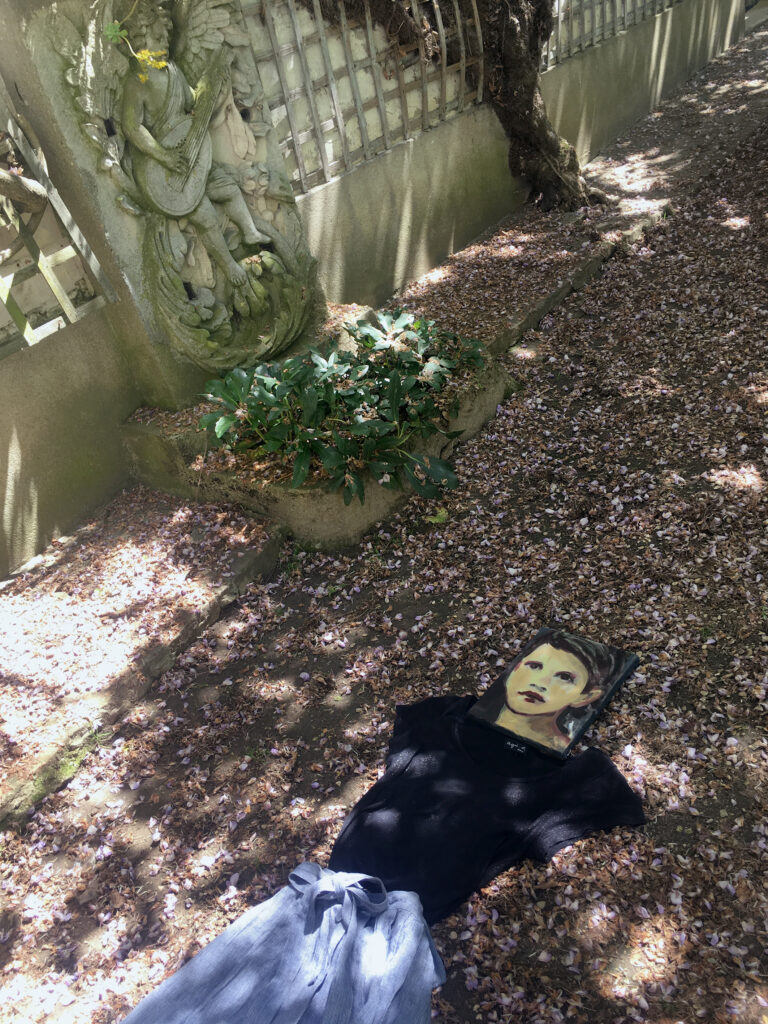 What ensued was almost a game, something agnès b. has explained, simply, as “playing dolls.” She started taking the paintings outside and into her garden and placing them in trees, nestled in the grass, perched casually on footpaths. She dressed the portraits up in clothes from her wardrobe, some of which are forty years old. “I used a ladder and I had to be a bit of a gymnast,” the eighty-year-old designer confessed. As she progressed with the project, hauling the paintings of the “deux filles” around her garden, staging the photos, dragging her old ladder around behind her, she told herself stories about “the witch in the tree” or “the girl in the dream.” 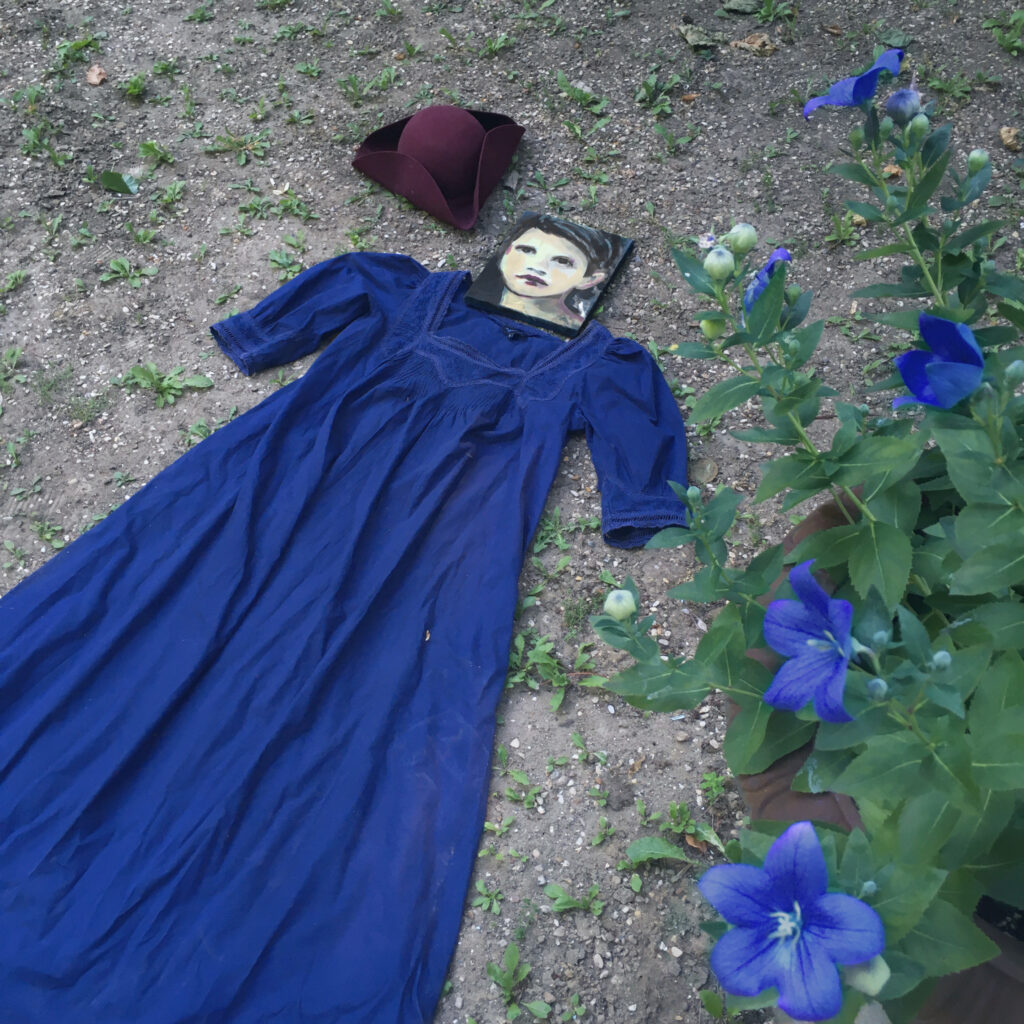 Although agnès b. uses an old Nikon most of the time and says, “I’ve been taking black and white photos with my Nikon for years,” for these pictures, she preferred to use her iPhone 6. “You have a phone in your pocket and voilà, it’s done!” 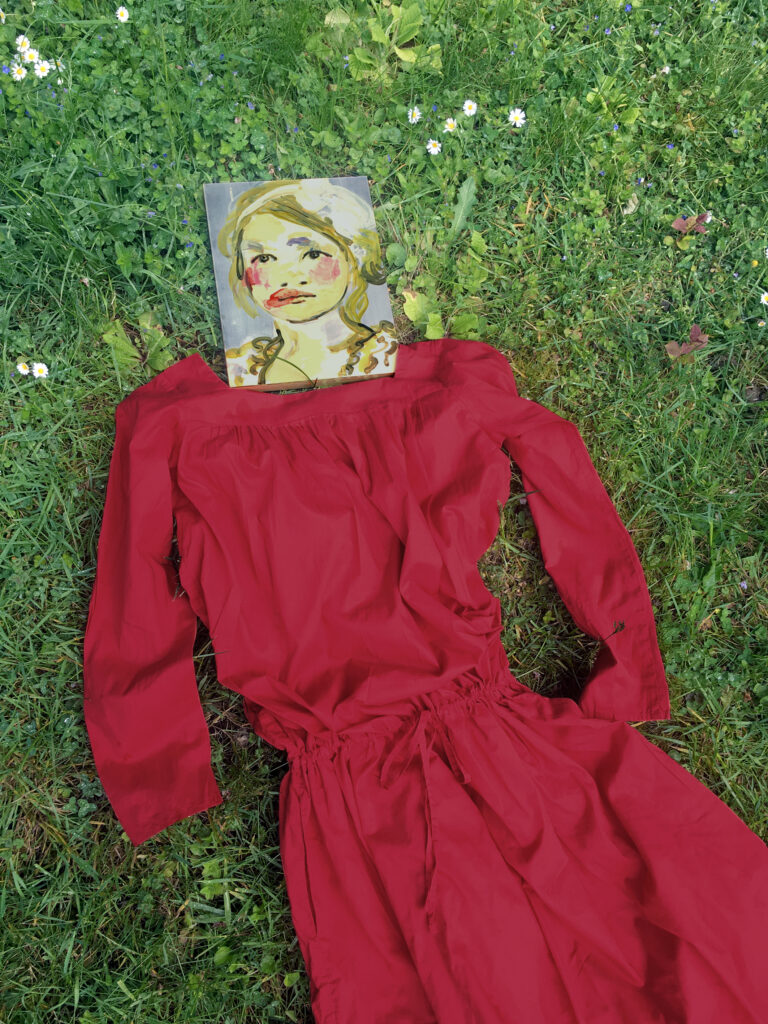 The iPhone gives the images a loose quality and, indeed, some of the most successful pieces have an ethereal mixture of humor and nostalgia. Certain shots have an edge, too, as if the viewer has happened upon the scene of a crime or interrupted a private moment we aren’t supposed to see. The provocativeness isn’t surprising. Agnès has been preoccupied with the lives of women and girls her whole life: She grew up as one of three sisters born over four years to a family that often struggled to make ends meet. Agnès herself became the single mother of twin boys at twenty-one. In 2013, she made a movie about a young girl who is sexually abused by her father called, Je m’appelle Hmmm. And, of course, in the fashion industry, she is surrounded by women and girls—her colleagues, models, and muses. She once said, “Clothes for me are all about feeling in harmony with yourself to be able to think about something else. They are only a means. If I can help people to feel good, to feel attractive, so much the better. That’s what brings me pleasure.” 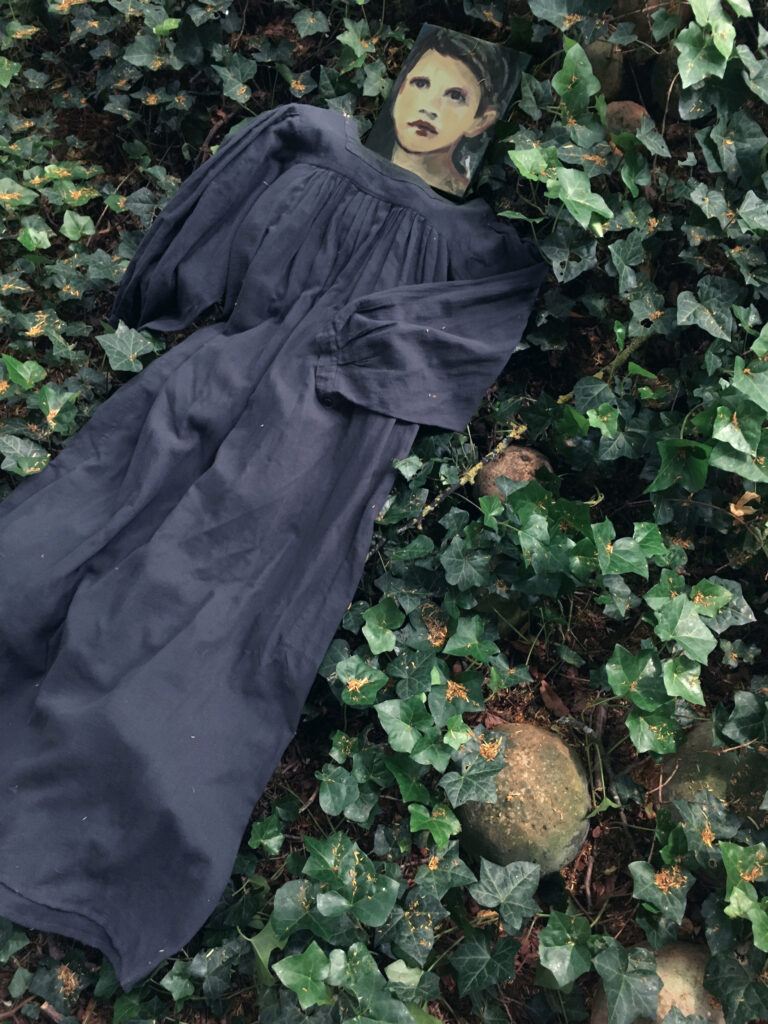 But it was her father’s name for his daughters that she remembered fondly when she was creating these latest portraits. He used to call his three girls his “drôllesses,” or “funny little girls.” Imagining the young women in the Tabouret paintings as two more drôllesses in her family, she delighted in bringing them to life in her own clothing around her estate. 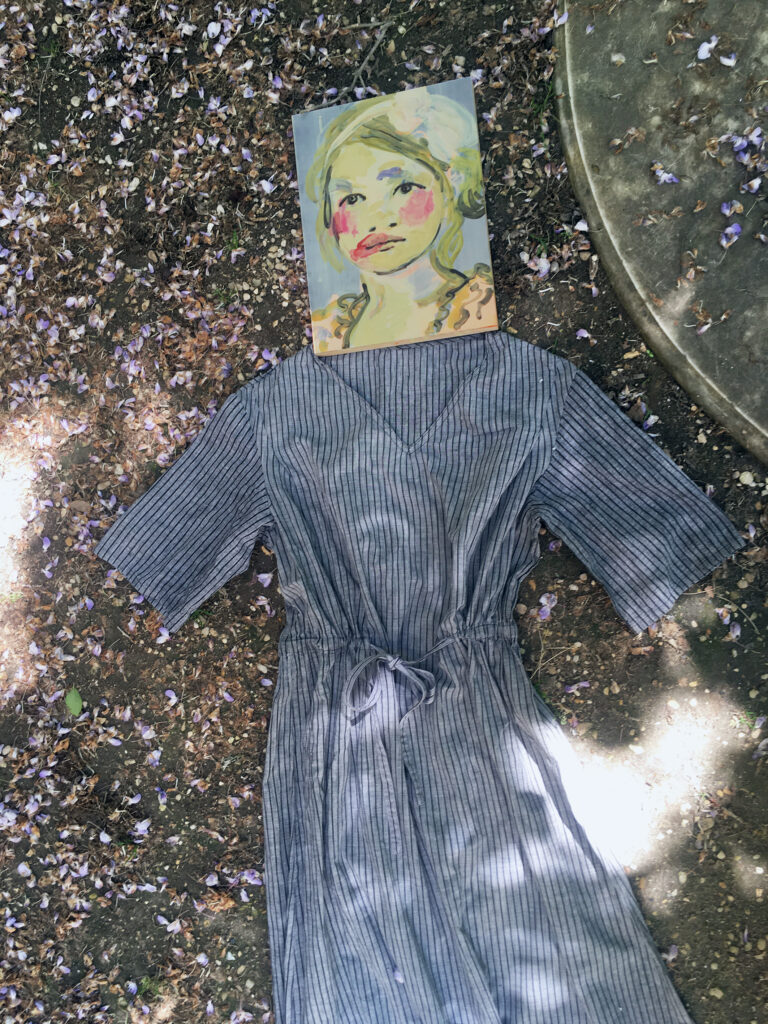 agnès b. says of those fruitful months in 2020 that, “Time, my only enemy, fell into my arms.” She finally had the space to just play, and these photographs bring time—which, for once, became a friend—to the forefront. In the images themselves, you feel the languorousness of those long Covid minutes and hours that stretched out interminably and indefinitely in the early days of the pandemic. You sense the playful nature of her project, and also the isolation and boredom. In the end, it is that feeling of hours standing still that is so relatable for her viewer, because it is the one thing that everyone, everywhere, both lost and regained during that strange unsolicited pause we all took together.

The photographs will be on view at the agnès b. Galerie boutique in New York City until November 20th.  A 120-page catalog, les drôlesses – agnès b. interprets CLAIRE TABOURET, was published for the exhibition in 2021 and will be for sale at agnès b. stores and online at www.agnesb.us for $35. For each catalog sold, four euros will be donated to Secours Populaire, a French non-profit organization founded in 1945, dedicated to fighting poverty and discrimination in public life.

Caitlin Shetterly is the editor in chief of Frenchly. She is the author of four books, her most recent, a novel, is called Pete & Alice in Maine and will be published in the summer of 2023 by HarperBooks.