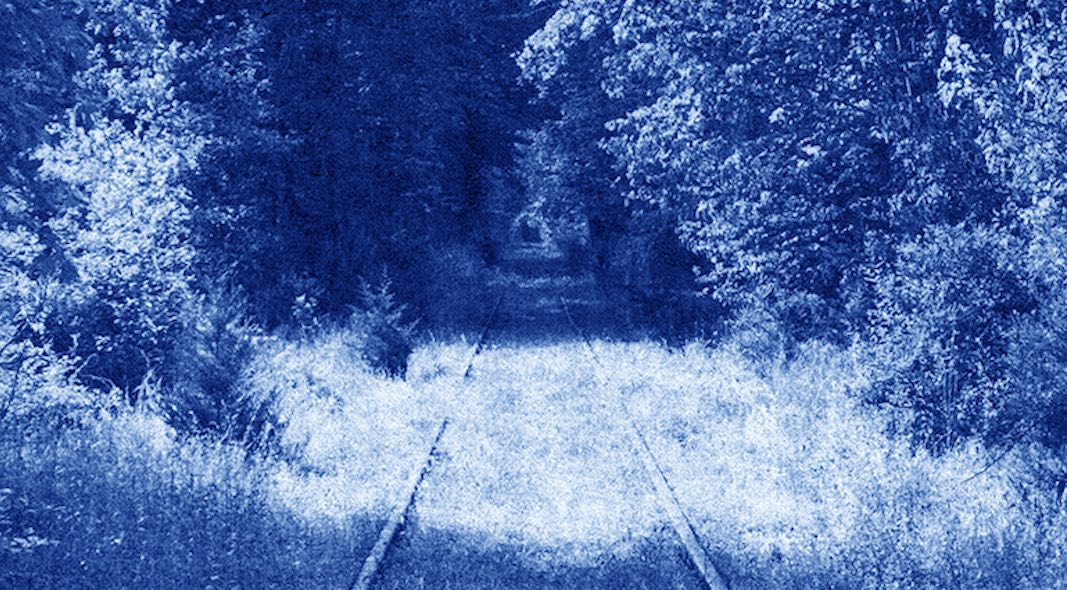 agnès b. is blue

Last winter, the almost eighty-year-old French fashion icon and designer agnès b., known to her fans, friends and family as just, simply, Agnès, approached the 42-year-old New York-based photographer, Tim Barber, and asked if she could use some of his 2015 cyanotype photographs, entitled, “Blues,” for a handful of pieces in her Fall/Winter 2021 collection. Barber suggested that, instead, he’d like to make all new work for her. She agreed. So, he took out his iPhone and went into the woods. 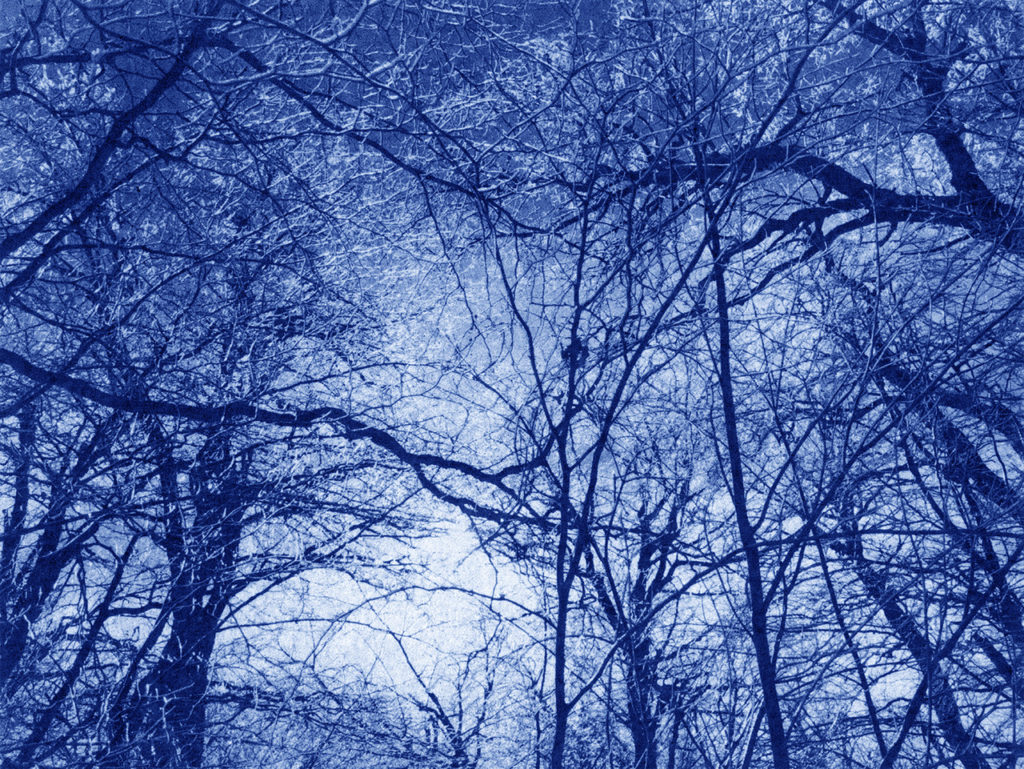 Barber was born in Vancouver Canada in 1979.  Seven years before, in 1972, his parents Lois and Robin, had left  Indiana University where they were students, and driven across the country and north to Northern British Columbia, Canada. They were opposed to the Vietnam War and wanted to leave the United States. They settled in the mountains north of Vancouver, near the southern tip of Alaska, and lived there until Barber was one and his sister, Su, was three years old. Then, rather than commit, long term, with two growing children, to a Captain Fantastic kind of life in the mountains, they moved back to Vancouver  and lived there until Barber was 4. From there they moved to Western Massachusetts.

All through high school, Barber was already making photographs and experimenting with light and image. He eventually went back to Vancouver to art school at Emily Carr University of Art and Design. By the time he graduated, he was making art full-time. But, he  said, he “had no idea what making a career in photography would look like.”  He moved to New York City and started working as the Photo Editor at Vice Magazine and freelancing as a commercial and fashion photographer, always trying to bring his artist’s aesthetic to even the most banal photograph. The fashion world took notice of his ability to capture light, color, fabrics and mood. Before long, his work was in Vogue and The New York Times and his clients were the likes of Nike and Stella McCartney.

Although some photographers might just coast on the fast-paced caprices of the fashion world, Barber was always pushing himself to find new ways to look through the lens. In 2003 he had a big solo show of his work in Vancouver. And then, in 2005, agnès b. spotted him as a subject in some road trip photos a photographer named Ryan McGinley was showing in her Galerie du Jour in Paris. Something about him made enough of an impression on her that his face and name stayed with her.

By 2015, Barber had become really interested in making photographs with his iPhone, which, he says, has “a great camera.” He said, “I was trying to figure out how to print that work. I wanted a printing process that would abstract the image a bit and soften the edges…. Around that time, I saw a blueprint at an architecture firm that was half architectural and half art and I wanted to know how that was made.” It turns out that there was a lab around the corner from where he lived that had an old blueprint machine and some ancient rolls of a special paper for these kinds of prints that no one used anymore. Barber worked out a deal with the lab where he could come in and print his images as cyanotypes—which are kind of blueprint. “The guy was amazed I wanted to do this,” he said. Most architecture firms by then had gone entirely digital and this machine and its paper were both getting dusty in the back of the shop.

Chris Apple, the PR and Communications Manager at agnès b. in New York City, saw the work, which Barber was by now calling “Blues,” and showed it to Agnès. She remembered Barber from the McGinley road-trip photographs ten years earlier and said in an email that  she “immediately loved” his “Blues.”  With the support of agnès b., Barber’s project solidified and he threw himself into making a series of subtle, moody, and blue photographs. Apple and Agnès then invited him to show them in her Howard Street “Galerie Boutique.” Soon after, Agnès invited Barber to be in her booth at Paris Photo, the largest international photography art fair, where he showed his photos across the aisle from a booth showing Anna Atkins’ work—Atkins was a 19th century botanist and is considered to be the leading cyanotype photographer. Eventually, Agnès and Barber made a book together called, Blues, which his sister, Su, designed with him.

It’s not unusual for Agnès, who was born Agnès Troublé, and then took her first husband’s name, Bourgois, which was then shortened professionally to just “b.” after they separated, to take an artist under her wing as she did with Barber. She grew up in Versailles, near Paris, in a poor, though genteel, Catholic family. At nineteen, she had twin boys and at twenty-one she was a single mother with a dream to become a museum curator. She found her calling, however, in fashion. But she never forgot the art world, becoming not only a collector but an impassioned supporter, mentor and patron. “Suddenly no one cares what these artists have done, and they drop them,” she told a reporter, Jean-Louis de la Vaissiere, from the Jakarta Post, in 2020. “I don’t like that,” she said.

Agnès bought her first Jean-Michel Basquiat painting when he was still making street art in the ‘80s and hadn’t yet become a star; she was one of his first patrons. She now owns Basquiats, Warhols, Nan Goldins, Martin Parrs and much more and she runs two galleries in Paris. One is called La Fab, which shows works from her private collection, and the other, the La Galerie du Jour, is a gallery of works for sale, and where she shows artists she “discovers.” In addition, she has the “Galerie Boutique” in New York. Obviously her fame as a fashion designer and icon have helped her become a major force in the art world. But, interestingly, at the age of presque-80 she finds the fashion world tiring and like “everyone is in a bubble,” she told Vaissiere in the Jakarta Post. So, to balance her energies, she spends a good deal of her time working as an activist on climate change and for marginalized people around the world. She founded the Tara Ocean Foundation that “organizes voyages to study and understand the impact of climate change and the ecological crisis facing the world’s oceans.” Barber said, “She’s’ an amazingly and super supportive person. She’s a real positive force.”

Last winter, after Agnès got in touch, Barber went back into the lab with incredulous guy and the old machine and the crumbling old blueprint paper. What resulted was a series of ethereal photos of grass and trees and plants that are awash in the blue of cyanotypes. These are images that are nostalgic for a world we are losing, or may have already lost. 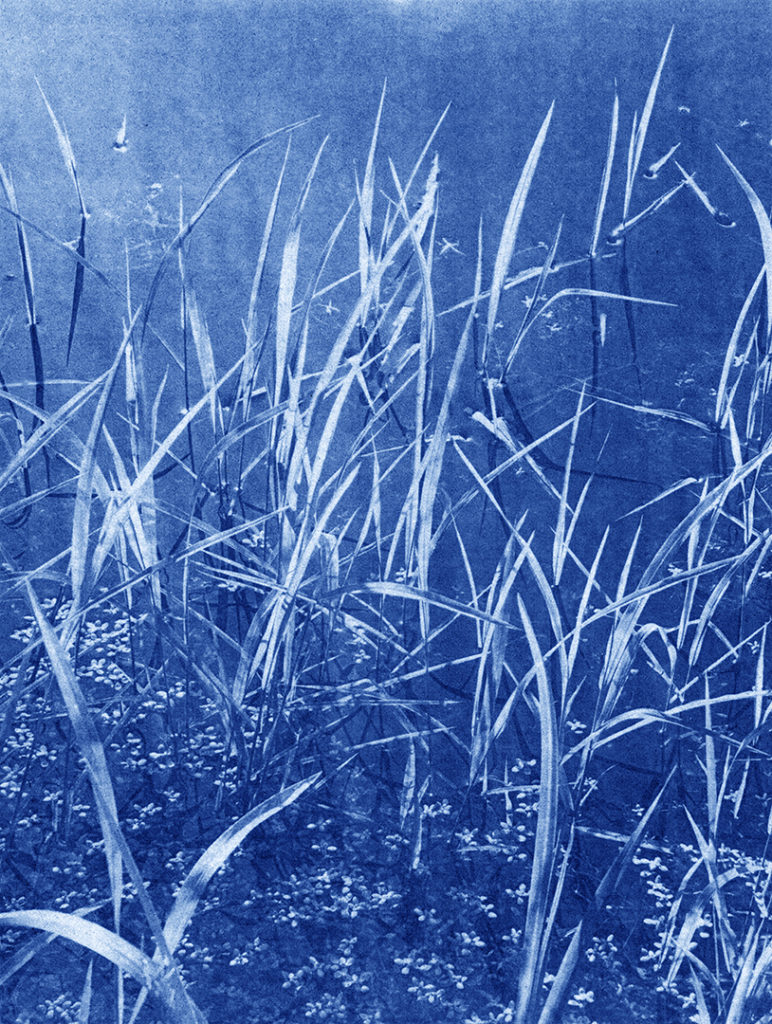 Agnès had Barber’s wistful images printed onto actual clothing that she debuted this fall as her “agnès b. X Tim Barber” collection which includes a black coat with a blue photo/print lining, several t-shirts, a sweatshirt and a scarf.  One of the most lovely and evocative pieces is a blue hoodie that is covered with a tangle of bare winter branches and blue sky, throwing the wearer, if not into real nature, then into a memory of once climbing trees and looking up into an overstory.

One can only hope that wearing Barber’s blue trees will work as some kind of special cloak, or charm, empowering all of us to fight for what is not yet, and doesn’t have to be, entirely lost.