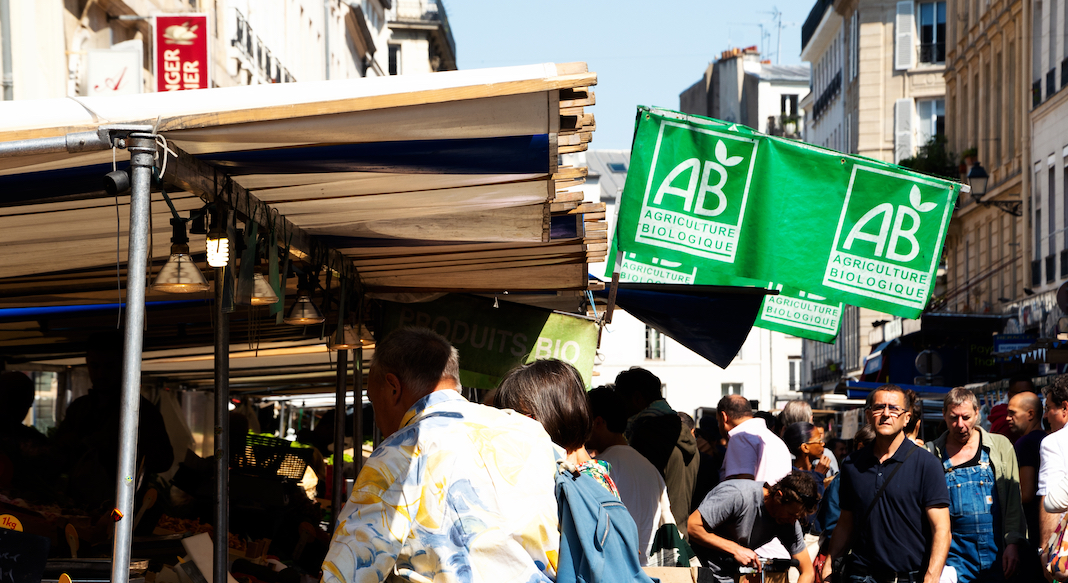 What Are ‘Bio’ Products in France?

The French are known for eating well and staying healthy. They love their markets, local butchers and bakers, and, as of late, bio products and stores. As the international push towards sustainable and organic agriculture and production increases, it’s worth looking at what that term actually means.

When you look at the packaging on organic products in France, you might see a variety of labels, many of which will have the word “bio,” or “biologique,” the French equivalent of “organic.” But the two most important terms that you should look out for are the European Union bio leaf logo and the AB logo.

The AB (Agriculture Biologique) logo was implemented in 1985 by the French Ministry of Agriculture and Fishing to mark products as organic as defined by French law. The ‘Euro leaf’ was implemented in 2010 as part of a continent-wide effort to standardize organic regulations. Their standards are the same, but the AB logo is only used in France on French products, while the ‘Euro leaf’ is used all throughout the European Union. Because of this, the AB logo could have been discarded altogether, but the government decided to hold onto it because of its level of brand recognition. The strict government regulations at the national level and beyond mean that you can be certain that if a product says it is “bio,” you know exactly what that means. There are separate rules for food that can be called “naturel,” or other looser categories, but if you see a green leaf, an AB, or the word “bio,” you are getting a federally regulated organic product.

But what exactly does it mean when a product is certified “bio” (i.e., organic)? Here are the main qualifiers.

— Products may not contain GMOs (Genetically Modified Organisms) or products derived from GMOs.
— Severe limits have been placed on what antibiotics can be used on animals or plants. For the most part, antibiotics are completely forbidden for animals (except in extreme health situations), and the use of antibiotics like tetracycline and streptomycin (often used on apple or pear plants) are also prohibited.
— All animals are strictly hormone-free.
— No use of artificial fertilizers, pesticides, and herbicides is allowed.
— Products must be made from at least 95% organic ingredients. Part of the reason why the 95% rule comes into play is because it is difficult to verify 100% that there has been no accidental cross-pollination of non-GMO plants by GMO plants.

In 2012, the E.U. and the United States decided to align their standards for organic farming in an agreement known as the U.S.-E.U. Organic Equivalency Arrangement. This required a great deal of collaboration between the two national organizations that govern organic farming practices on either side of the Atlantic: E.U. Organic Program, and the USDA National Organic Program. (Note that the Food and Drug Administration doesn’t regulate the term “organic”; the agency only deals with public health issues and does not consider organic food to have any kind of health benefits.)

By agreeing to a set of standards for defining what “organic” means, this arrangement allows for E.U. organic foods to be labeled and sold as such in the U.S., and vice versa. Companies no longer have to spend large amounts of money and time to have their products doubly certified according to each group’s regulations. So whether you see a green bio leaf or a USDA Organic stamp on a grocery item, it means that the product is held to near-identical standards, the only difference being where it was grown.

Unlike the U.S., the E.U. has organic standards for aquaculture (i.e., fish, shellfish, and aquatic plants). Which means that fish marked with a green bio leaf is hormone-free, raised on organic feed, and kept in water of a regulated quality.

There are also options for getting “bio” textiles or beauty and health products. Though the European Commission does not cover those in its organic criteria, the independent French company Ecocert provides a separate certification for organic cosmetics that are free from Parabens, Phenoxyethanol, synthetic perfumes and dyes, GMOs, and more.

Though there is still little evidence that organic food contains any more health benefits than non-organic food (or even that it is necessarily better for the environment), it’s always better to know where your food is coming from — especially if animal welfare is a cause you care about. So check out stores like Biocoop and Naturalia in France for all your organic grocery needs, or just look for the green leaf at your local Monoprix or Franprix.

For more information on organic agriculture in Europe, Agence Bio and IFOAM EU (the International Federation of Organic Agriculture Movements) have a great deal of online resources to help you in your research.