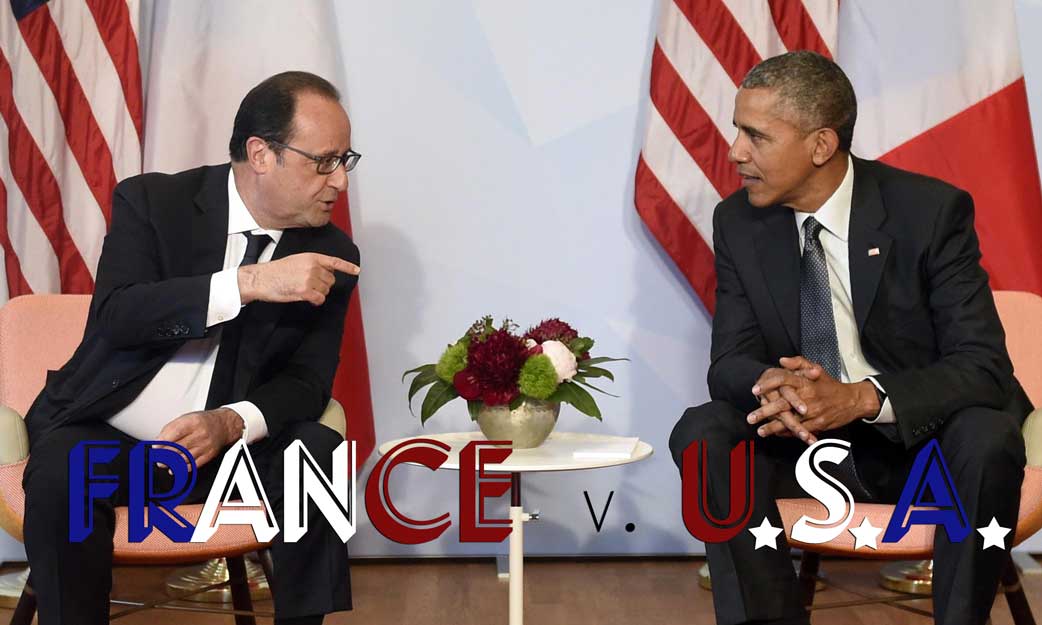 17 Things The French Do Better Than Americans

The United States, we’ve often heard, is #1. No one’s sure why, but the competition must be something like the World Series, where the U.S. has a 97% chance of winning every year because only one team isn’t American. Still, if we’re #1, then someone else has to be #2. Our formal nomination for France follows:

While we’re in line for our second, horrifying Cinnabun this week, the French are off eating pastries that qualify as visual art. Pain au chocolat? The Mont Blanc? Tarts? The Croquembouche? We don’t stand a chance.

Granted, the Washington Monument is only good for storing a lot of white bricks and the Gateway Arch looks like half a McDonald’s logo, but the French didn’t even like the Eiffel Tower when it was built, and yet there it still stands, doing pretty much nothing all day long. And if that wasn’t enough, they sent us the Statue Of Liberty with nothing to stand it on—the pedestal was too close to a functional building.

15. Finding reasons why America is better.

America: The further away the expiration date, the better.

France: Milk? Just blast it with enough ultra-high heat that it’ll survive for months on an unrefrigerated shelf.

Try figuring out from one sentence of spoken French whether a guy is running or a bunch of guys are running, possibly with any number of women alongside them. It’s all couched in context with both the French and the French language.

Remove all branding from the packs, raise the price, ban them from bars, make them nigh impossible to buy after 2am—French people will continue smoking. A fourth of them still smoke despite everything, and a third of teenagers do the same.

Oh sure, the Doctor has a TARDIS. But France lets you experience layers of time all at once. Midnight In Paris is only partly fiction: at certain times, in certain places, it seems entirely possible that Bonapartist conspirators will rush by you, pursued by Royalist police. Go to the top of the Arc de Triomphe, and Sacre Coeur, the Eiffel Tower, La Defense, and the Tour Montparnasse will rise up like temporal bookmarks from a city mostly frozen in time around 1860.

Like New Yorkers, Parisians have a reputation for being rude. But the situation rudeness of Paris is a proportionate response: unlike New York, there is nowhere in Paris to really escape tourists. And when someone asks you, in French, where the imitation bags are (Canal Street), it’s your constitutional right to make them earn the answer. It’s actually, in fact, startling how nice the French are. Try using broken French to get a copy of Scott Pilgrim, and the girl behind the desk will answer you in English for your own sake. Walk into a store, and you’ll get a bright bonjour; walk out, and you’ll probably get a très bonne journée.

The only real asshole I ever met in Paris was a bald waiter at—wouldn’t you know it—Le Dôme. He said there was no credit card machine when the check came, sending me off to an ATM around the corner. When I came back, he had a handheld credit card machine he was using to run the card of some old ladies enjoying coffee en terrasse. As far as I can tell, my sin was not lingering, not enjoying myself with a prolonged meal. “The French have a saying: the customer is king,” CNN says. “Yes, and we know what you did to your kings.” What feels like a sin as vile as murder in America—taking your time with a cup of coffee and not making room for new customers—is de rigueur in France. Whereas, in America, a meal is something to be defeated quickly, an obstacle to the rest of the day, in France, it’s your god-given right to savor it.

The United States abandoned regional trains when we discovered how much more gas we could consume by driving cars between the cities where we worked and the suburbs where we lived. While we’re stuck on an Acela “Express” that’s using the same tracks as freight trains, NJ Transit trains, and people taking a shortcut through town, the French are blasting along dedicated tracks at an average of 50mph faster on the TGV. Their destination? Pretty much anywhere in the country. Or outside the country. Your destination? Probably one of the twelve cities along Amtrak’s Northeast Corridor.

In America, grocery shopping is so beleaguering that people lean forward on the handle like it’s a rolling walker. One place with everything you need? Forget it: there’s something magical about the steps necessary to make breakfast in France. First, you go to the boulangerie for some bread, then to the fromagerie for some cheese, and then, and only then, to the 8 À Huit, straight past the weird, unrefrigerated milk to the unrefrigerated eggs. For Americans, it’s an object lesson in how to be leisurely about food.

It’s not a matter of better, really, but the French language is sickeningly easy to rhyme with. Want to rhyme ‘orange’? Well, orange rhymes with blancmange and dérange and mélange and 623 other words in French. In English, you’re out of luck, unless you were born Marshall Mathers.

Is it because they let their dough rest for longer than we do in America? Is it the mother dough? Is it hundreds of years of caked, baked yeast inside the oven, permeating the brick itself? There are a lot of theories more sound than New York’s treasured “it’s the tap water” bagel argument, but it’s inarguable that the French have taken great pains to master breadmaking.

They’ll invent a way to pasteurize some of it while still using raw milk to make the rest. All bets are off when the French conspire to make cheese, and it’s led to an estimated, round thousand types and sub-varieties of cheese produced in France. As Charles de Gaulle said, “How can you govern a country that has 246 varieties of cheese?”

The French may have stopped smarting since the Judgment of Paris in 1976, when California wines beat French labels in a blind taste test, but the ascendancy of Napa wines and other New World quaffs still hasn’t supplanted the French dominance over wine culture. They’re also the best at making good wine really, really cheap in their own country.