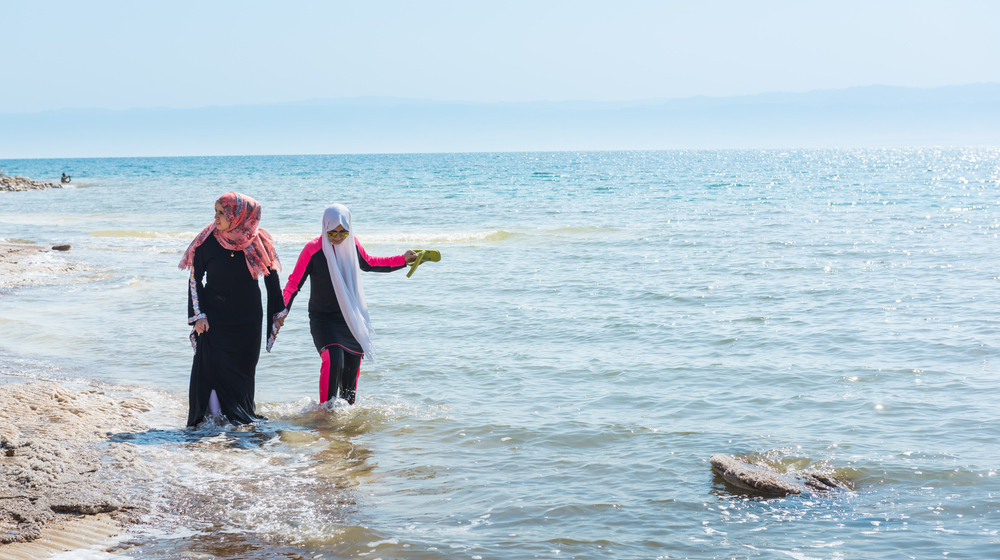 Why the Burkini Got French Panties in a Twist

How the bodies of French Muslim women became a battleground.

A strange psychosis has France in its grip. Confronted with an  unprecedented terrorist threat, the entire nation is obsessing over a full-body swimsuit called the burkini. The world outside of France is struggling to understand why wearing it is a terrorist-sympathizing provocation. And why women are expected to affirm “French” values by wearing something else at the beach – like an itsy bitsy bikini-thong.

It all began in August when dozens of French municipalities, mainly on the Riviera, banned the burkini – a wetsuit popular with some Muslim women that covers the body except the face, hands and feet.  According to opinion polls, two thirds of the French are in favor of the ban.

A set of photos, now viral, shows four armed “burkini” cops surrounding a middle-aged woman at a beach in Nice and forcing her to remove her tunic and bare her arms under the watchful gaze of fellow beachgoers. One of the cops is writing her a ticket.

David Thomson, author of “The French Jihadist,” says the photos “will fuel ISIS propaganda for years to come.”

The beach is only a few feet away from the Promenade des Anglais, the boardwalk where Tunisian-born Mohamed Lahouaiej Bouhlel drove a rented truck into a crowd of people celebrating Bastille Day, killing 84 of them. Desperate to take some kind of action, the mayor of Nice and other politicians up and down the Riviera took aim at the Islamic “bikini.”

It doesn’t seem to matter that a third of the people killed in the beach attack were Muslim or that the first person Bouhlel ran over was a Muslim grandmother in a headscarf.  Women who cover their bodies on the beach are now suspect.

Nor does it seem to matter that France’s highest court, the Conseil d’Etat, ruled that the anti-burkini bans “seriously and clearly breach fundamental freedoms.” Some of the mayors are still enforcing the ban.

An amalgam of “burka” and “bikini,” the burkini (also spelled burqini) is actually an Australian import. Lebanese-Australian Aheda Zanetti, the burkini’s inventor, says she wanted to “give women freedom, not to take it away.” From the beginning it was conceived as “a compromise between faith and modernity.” Muslim women competed in burkinis in the Rio Olympics. A lot of non-Muslims wear them, too.

But for Manuel Valls, France’s Prime Minister in the current Socialist government, the burkini represents the “enslavement of women.” The debate over a ban must continue, he writes on Facebook, in the face of an existential threat to national unity. In a much-ridiculed speech, Valls hailed bare breasts as the symbol of France. “Marianne has a naked breast because she is feeding the people! She is not veiled, because she is free! That is the Republic!”

Valls has taken on the world’s “false” and “unacceptable” image of France, particularly as reflected in a New York Times article quoting Muslim women about life in France and Belgium (“dogs can have more rights than a scarfed woman.”) His response is on the Huffington Post: “Come on! It is precisely for freedom that we are fighting.”

The high court ruling about women’s swimsuits fell on the very anniversary of the Declaration of the Rights of Man – which are now the Rights of Women, too. But France’s Rights of Women minister, Laurence Rossignol, rejected the court’s decision. “The logic of the burkini,” she says, “is to hide women’s bodies in order to better control them.”

France and the US are two nations born of 18th-century revolutions that separated church and state. Legally speaking, freedom of expression guarantees freedom of religion in both countries. But France is an increasingly post-religious society – almost two thirds of its citizens (including one third of the Catholics) no longer believe in God or don’t know if God exists. In the US, not only do nine out of ten Americans say they believe in God, almost half agree that “God created human beings in their present form at one time within the last 10,000 years.”

While the USA protects religious groups from state interference, France actually seeks to protect its citizens from organized religion. The French state discourages individuals from being religious in public for the same reasons it tries to stop them from smoking: because it’s not considered good for their health. The law of the land since 1905, laicité (“secularism”), has its roots in the French Revolution’s attempt to dismantle the Catholic Church along with the monarchy. In public, everyone is meant to be, simply, a citizen of the Republic. French politicians don’t say “God Bless France” at the end of a speech.

Since religion is confined to the private sphere, a Muslim woman in France has to remove her headscarf if she wants to work in a public school or government office.

In 2004, the French government banned all religious symbols and clothing from public schools. The law’s subtle language lets you get away with wearing a small cross or star of David but not a “visible” headscarf. So Muslim girls became the main target. A 2011 law that prohibits face covering in public made wearing a Burka illegal. In the name of laïcité, local authorities have banned mothers who wear headscarves from picking their children up at school or accompanying them on school field trips. Laïcité is why, at some French schools, Muslim and Jewish schoolchildren have been told to eat pork or go hungry.

When applied rigidly, laïcité leads to magical-thinking about French homogeneity, which is self-enforcing because it’s illegal to collect statistics by asking about race, religion or ethnicity.  “The French have not yet resolved to be what they already are, a multicultural society,” laments Jean Daniel in Nouvel Obs magazine.

There are no official statistics on the number of French Muslims or the discrimination they face in employment, housing and education. The French state does not acknowledge, since it claims the right to not know, that 60 to 70 percent of all prison inmates are Muslim.

The French state does collect statistics about attacks on Muslims – the number tripled between 2014 and 2015. Women wearing a headscarf – or a burkini – are a visible target: 80% of Islamophobic attacks are against women according to the EU’s Commissioner of Human Rights.

The beach has become a must-win battleground state in France’s upcoming presidential elections. Politicians from the far-left to the far-right are hitting the airwaves with campaign promises to criminalize the burkini and liberate women’s bodies from its shackles. Former president Nicolas Sarkozy, running for the highest office again, says he will rewrite the constitution if necessary.

And at least one politician, French president Francois Hollande, – admittedly the most unpopular in modern French history – is speaking out against banning the burkini.

The summer may be over but the debate over a body covering swimsuit has become, with less than 200 days before the French go to the polls, one of the hottest election issues.