Few designers, even in haute couture, have left the kind of unmistakable stamp on fashion history that Thierry Mugler has. The French couturier and parfumier began his life in the world of ballet, and a dancer’s inspiration has followed him through a career defined by theatrical outfits, and costumes made for the stage. He launched his own fashion company in 1973, and spent the next few decades redefining what a woman could, and should, wear. Though he left fashion in 2002, he continued creating up until his death in January of this year, building his self-titled perfume line and a cosmetics offshoot, directing a Cirque du Soleil show, and becoming an artistic designer to Beyoncé.

Mugler’s iconic designs, wildly constructed and visually striking, are as fresh twenty or thirty years later as they were when he first introduced them. At the 2019 Grammy’s, Cardi B appeared in Mugler’s famous Venus dress, shipped from the archives in Paris. A couple months later, Kim Kardashian made a sparkling appearance at the Met Gala in a “dripping wet” Mugler dress, the first new dress designed by the artist in 20 years. But these are just the tip of the couture crystal iceberg. 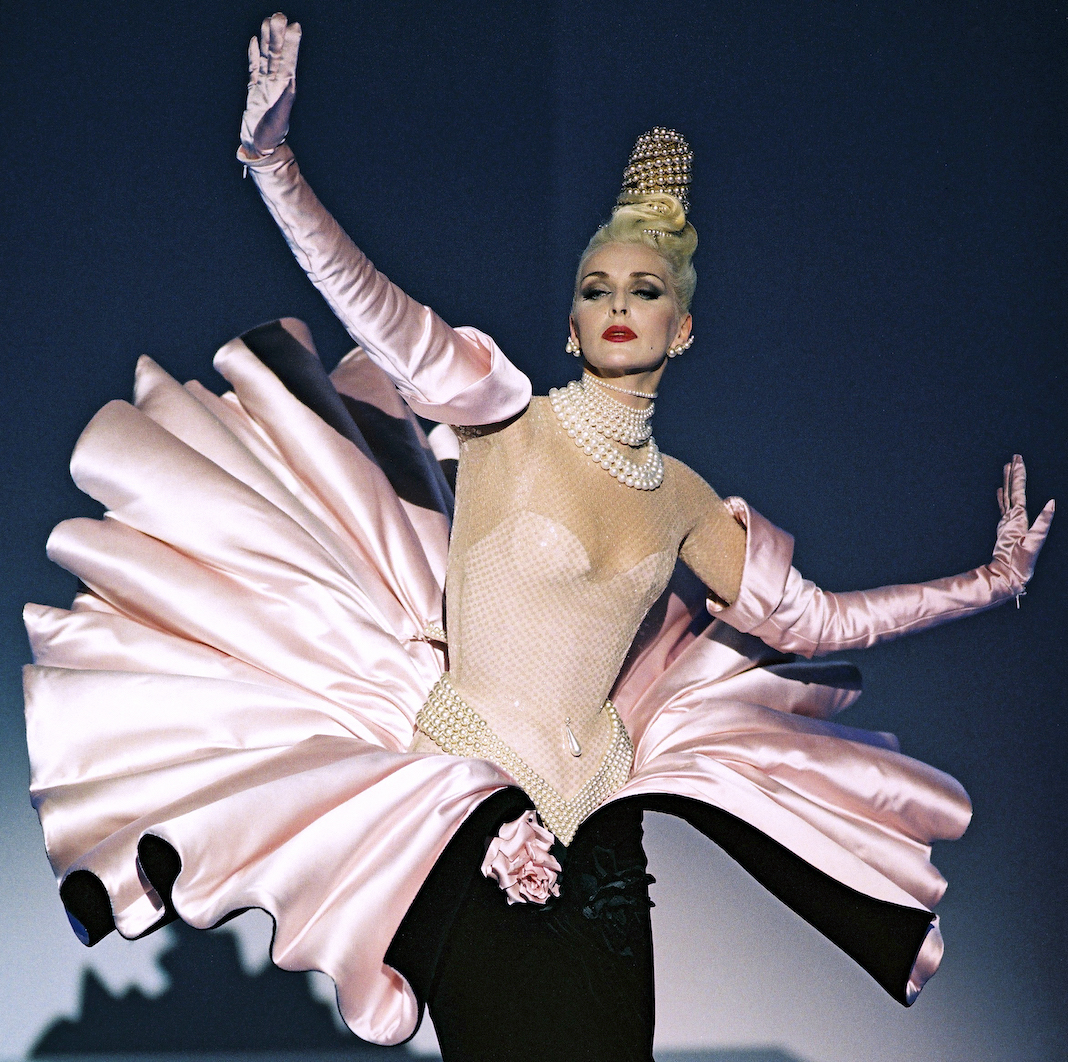 From November 18, 2022, through May 7, 2023, the Brooklyn Museum will present Thierry Mugler, Couturissime, an exhibition showcasing ready-to-wear and haute couture pieces from Mugler’s archives, stage costumes, photographs, and films from between 1973 and 2014. This will continue the museum’s string of exhibitions devoted to French couturiers, including Jean Paul Gaultier in 2013, Pierre Cardin in 2019, and Christian Dior in 2021. The exhibit is curated by Thierry-Maxime Loriot, and was originally shown at the Montreal Museum of Fine Arts in 2019. It has been adapted in tandem with Matthew Yokobosky, the Brooklyn Museum’s Senior Curator of Fashion and Material Culture.

“Always ahead of his time, Manfred Thierry Mugler built a world blending fantasy, extravagance, and experimentation,” says Sandrine Groslier, Mugler Fashion and Fragrance Global President. “I also see Mugler as a troublemaker and a sculptor of fantasies, who never had enough extravagances. Mugler used to say, ‘My limit is NO limit.’”

In the 1970s up to the early 2000s, Mugler was hailed as one of the most innovative designers of his day, redefining haute couture in the 1980s and 90s. His use of photography as a means of enhancing a fashion show led Mugler to create some of the most iconic catwalk moments in fashion history. Parts of the exhibition are dedicated to Mugler’s work as a fashion photographer, as well as his many inspirations in that field, and show off numerous rare prints by artists including Guy Bourdin, Jean-Paul Goude, Karl Lagerfeld, Dominique Issermann, David LaChapelle, Luigi & Iango, Sarah Moon, Pierre et Gilles, Paolo Roversi, Herb Ritts and Ellen von Unwerth. Particular attention will be paid to Mugler’s lifelong collaborations with the photographer Helmut Newton, including photos from their 1998/1999 “Lingerie Revisited” project.

Mugler started out as a ballet dancer in Alsace at the age of 14, immersing himself in the world of dance and theater before moving to Paris in his 20s to be a designer. But his appreciation for the female form, born out of a balletic comprehension of the body and its capabilities, can be seen in his iconic silhouettes, which seem to fuse with and transform the human body. “Thierry Mugler was a designer who intimately understood the mechanics of the body and had extensive knowledge of materials and production,” explains Yokobosky.

“The constant innovations, inventions, and avant-garde architectural silhouettes in the work of Mugler have marked an era,” continues Loriot. “His singular style found a place in the history of fashion that still has a powerful influence on today’s generation of couturiers, not only because of its designs, but also because of the strong message of inclusivity, diversity, and empowerment in his body of work.” 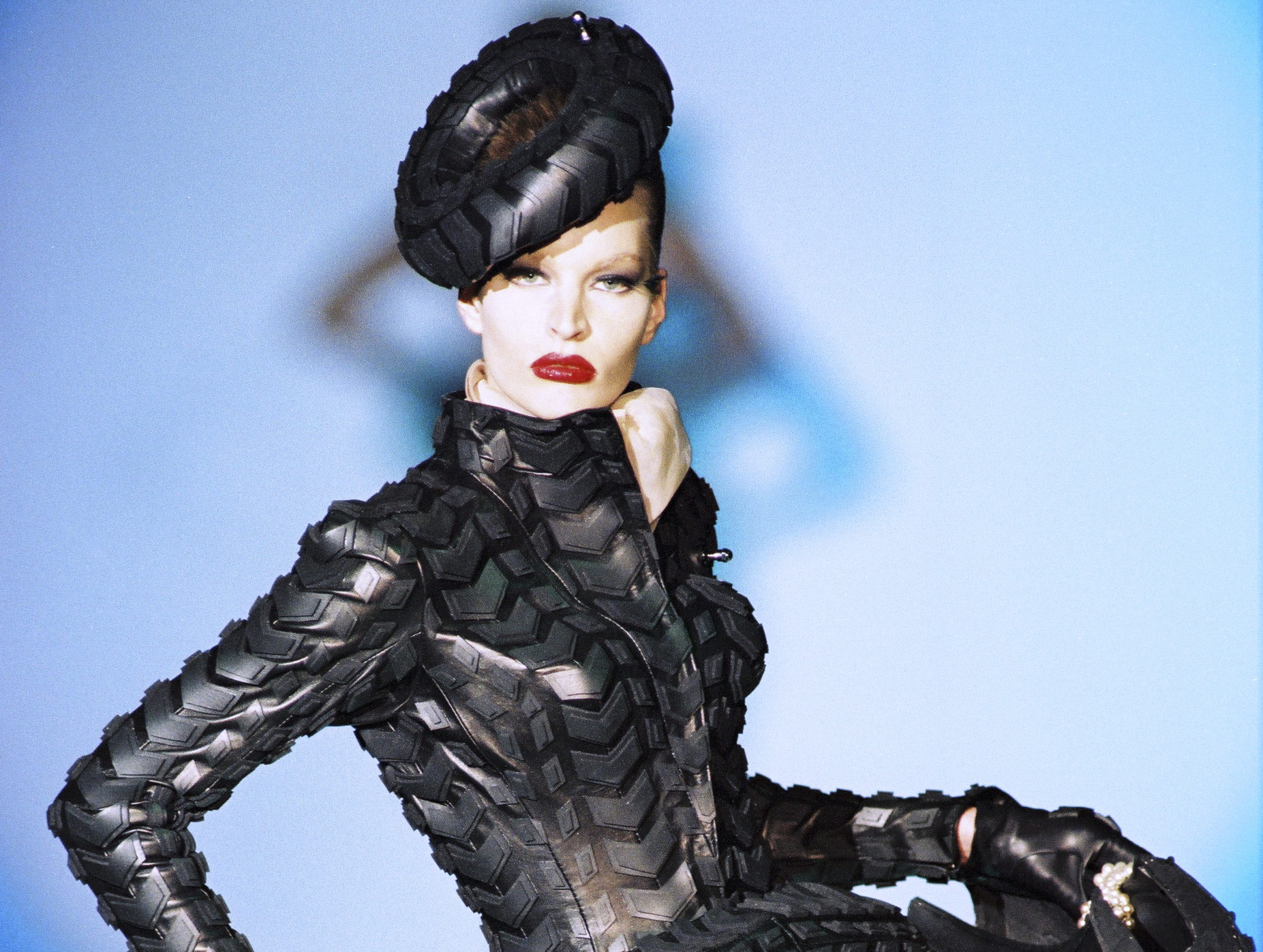 The exhibition will be organized thematically, opening with a life-size 3-D hologram, made by artist Michel Lemieux for Lemieux Pilon 4D Art. Mugler’s obsession with science fiction, fantasy, industry and technology, comic books, and the natural world will be explored, each in their own section. To celebrate his obsession with the futuristic and sci-fi, his “convertible” sheath gowns, “fender” bustiers, “radiator” belts, and a “tail fin” bag will be on display alongside his famous 1995 robotic suit of armor known as the Maschinenmensch. Glittering, colorful pieces from Mugler’s 1997/1998 Les Insectes and La Chimère collections, inspired by real and fantastical wildlife like butterflies and sea nymphs, show off his more whimsical and fantastical instincts. And of course, you’ll get to see Mugler’s rejection of hippie chic, the 90s-era “Glamazon,” with her vinyl and latex urbanity.

The Brooklyn Museum’s presentation of this exhibition will even include a unique section devoted to fragrance, in honor of the thirtieth anniversary of the release of Mugler’s trailblazing scent, “Angel.” Its particular makeup ushered in an era of “gourmand” perfumes, and this signature scent will be showcased alongside others of his, like Alien, A*men, Aura, and Womanity.

Thierry Mugler, Couturissime provides a very special opportunity to look at the career in total of one of fashion’s greatest designers. With designs both futuristic and elegant, Mugler’s creations provide a way to review the way our visions of ourselves move fashion throughout the ages, allowing us to manifest not as who we are, but as who we could be.