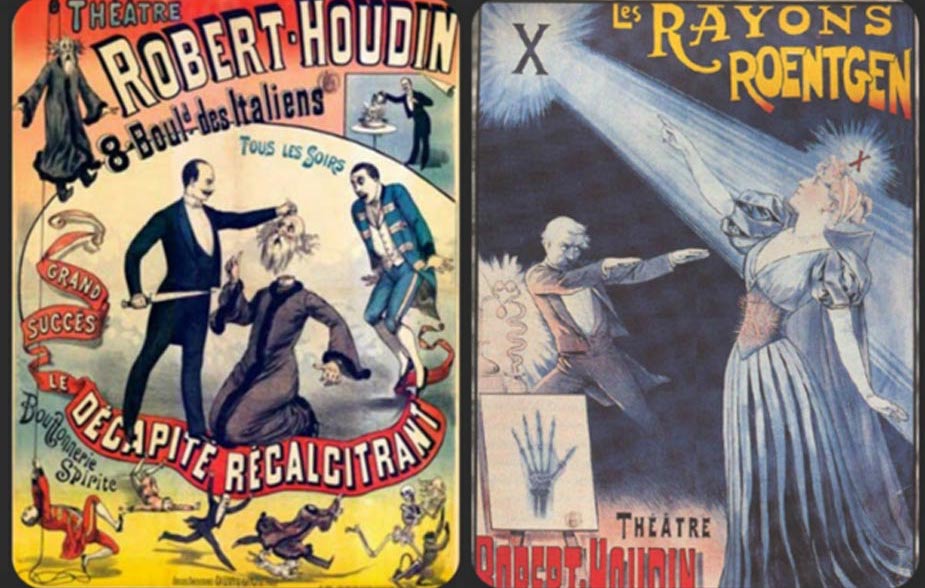 The Greatest Magician Who Ever Lived Was French

You’ve probably heard of famous magicians like David Copperfield and Penn & Teller, and maybe even earlier ones like The Great Houdini. But did you know that the man considered the father of modern magic was French?

Jean Eugène Robert was born in 1805 in the city of Blois. His father was a watchmaker and young Jean followed in his footsteps, eventually taking over the family business. One day, he ordered two books on watchmaking but the publisher mixed up his order and sent two books on magic instead. Intrigued, the young watchmaker began practicing tricks under the tutelage of a local magician and performing them at parties.

At the age of 25 he met Cécile Houdin and they married soon after, with Jean taking his new wife’s name and becoming Jean Eugène Robert-Houdin. The name change was so unusual at the time that it required special permission from the French government.

Robert-Houdin moved to Paris and began working in his father-in-law’s watch shop while continuing to practice magic on the side. He also began building automatons, mechanical figures that could do things like write and draw. One was so good that it was demonstrated before the King of France and later sold to P.T. Barnum (yes, that P.T. Barnum).

Robert-Houdin built complicated gadgets for magic tricks and in 1845 opened a lavish 200-seat theater in Paris, just for his magic shows. This was the first time anyone had done such a thing, as magicians then mostly performed at markets and fairs, and it became a huge success. Many of his famous tricks like The Marvelous Orange Tree and The Ethereal Suspension were copied by other magicians and became staples of magic shows throughout the world. He also began the fashion of magicians wearing tuxedos and top hats.

Robert-Houdin retired in 1853 but three years later was asked by Emperor Napoleon III to go to Algeria, one of France’s colonies, on a special “magical mission.” France feared an uprising in Algeria by local leaders who were able to control their people with faux magic tricks. Robert-Houdin was to demonstrate that “French magic” was more powerful than “Algerian magic.”

He brought with him a small box with an iron bottom that sat on top of an electromagnet, which was a new technology at the time. He called together the Algerian leaders and performed a number of his tricks, like asking a strong man to lift his box (easy) and then try again after “magically” sapping the man’s strength. By secretly turning on the electromagnet at the same time, he made the box impossible to lift. This trick, plus others like when he “caught” a bullet between his teeth, convinced the leaders that French magic was powerful indeed and the uprising was averted.

Today you can visit the House of Magic in Robert-Houdin’s former Blois home, which houses many of his mementos. Magic shows are performed throughout the day and every hour the house’s windows open and six dragons emerge, snapping their jaws at the spectators below. You can see them at about a minute and a half into this video.

There are streets named after Robert-Houdin in cities throughout France, including Blois and Paris, as well as a commemorative plaque where his Paris theater used to be.

And if you were wondering about it, yes, the name The Great Houdini (as in Harry Houdini), was an homage to Robert-Houdin, the father of modern magic.