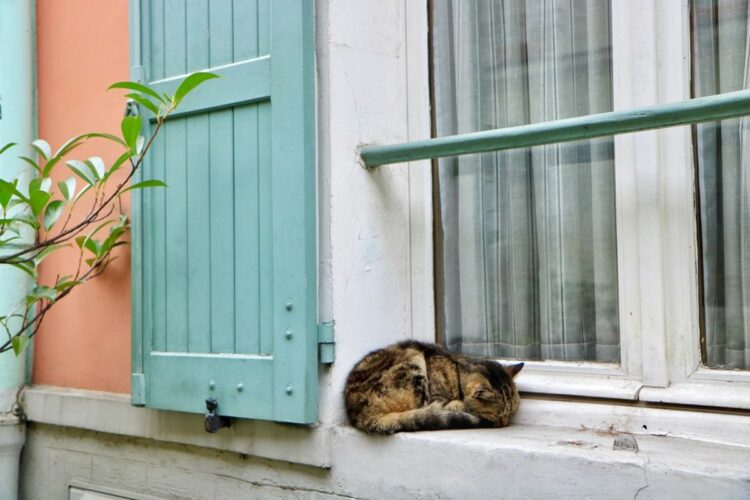 The Art & Customs of the French Sunday

Sunday is traditionally a day for prayer and repose. Despite being one of Europe’s most secular nations, France has made an art of the latter custom, which makes room for the former custom, for those who want it. The French Sunday is renowned as a day for spending time with family and doing absolutely nothing (other than church) because everything is closed (as the shop-owners are doing the same.) It’s the one day that everyone takes off.

In the cult-favorite Netflix show Emily in Paris  the protagonist is often reminded that working on the weekend in France is interdit! (forbidden by law).  She is scolded for even wanting to reach out to her workers on the weekend. And this is, in fact, very true:  it is prohibited in France to work on the weekends.

An 1814 law made it officially illegal to work on Sundays. However, it was soon overturned and it was decided that many French workers had to be at their jobs every day, seven days a week. But a growing awareness and concern for social and public health continued and, eventually, resulted in a few more laws which were passed in 1841, 1851, and 1892, trying to institute a mandatory day off. Finally in 1906, the concept of a mandatory day of rest was established and solidified for all salaried employees of commercial and industrial establishments by the “Loi du 13 Juillet 1906 établissant le repos hebdomadaire en faveur des employés et ouvriers.” In order to refresh the law in a changing digital world,  a 2016 law was passed protecting employees’ “right to disconnect.” The law went into effect in 2017 stipulating that employers cannot require their employees to be available for workplace communication after hours and on weekends. They are not obliged to take calls, email, chats and more from their employer, employees or colleagues. 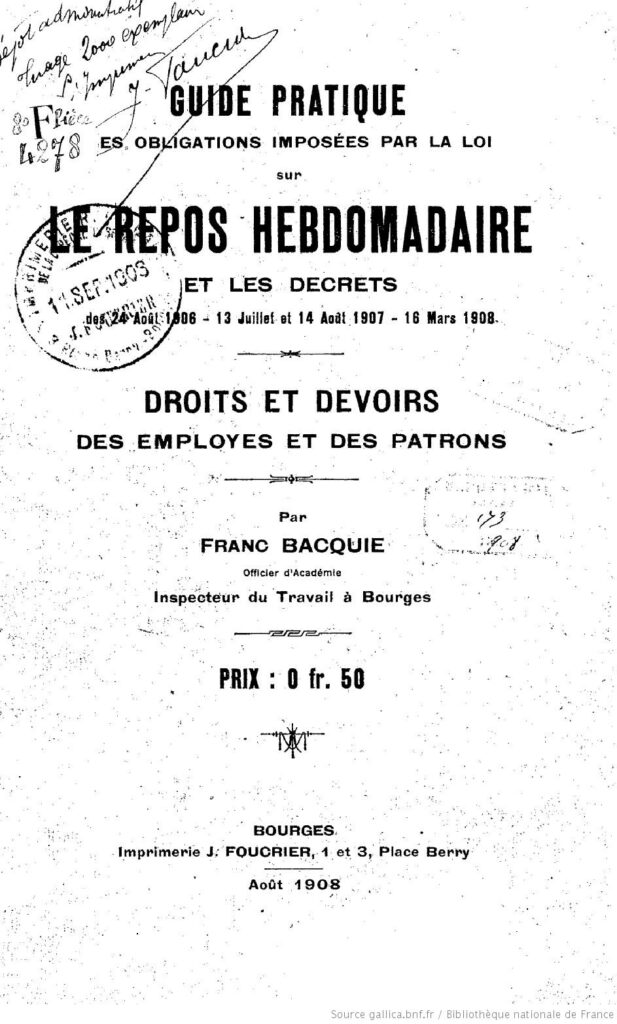 A traditional French Sunday is spent en famille, this could be in the city or visiting relatives in the banlieux, suburbs, or out in the country. This normally means that it is a day to sleep in and enjoy a dejeuner dominical. By Sunday, you’ve already done you marché shopping reserved for Saturdays and are ready to host, or visit, a long and boozy late Sunday lunch. “Sunday’s in France are usually a bit sacred,” explains young women’s rights activist Camille Bourron. “Usually, when you are with your family on Sundays, you have a nice big lunch with your family that lasts throughout the afternoon.”

My French Life writer, Emily Monaco, confirms the Sunday indulgence of leisurely time spent with family and recounts visits to her boyfriend’s family in the Loire Valley: “A French Sunday doesn’t feel like Sunday in America. I never know whether I should go downstairs before I’m called,” she writes. The French take their morning routines seriously, especially on Sundays, when they have a chance to sleep in, the children to play and catch up on homework, and the adults to cook. When everyone is dressed in their Sunday best and ready to eat, the affair begins with a hearty afternoon lunch.  The meal is sometimes followed by an apéro (cocktails and snacks) that last through the afternoon. Dinner is optional after a whole day of feasting.

Sunday lunch is often particularly homey dishes that take an effort–baking or longer preparations are favored. This can range from a lasagna dish to baked vegetables, boeuf bourguignon, vegetable rôti, and blanquette de veaux according to CuisineAZ. Most of these have a mom-and-pop appeal, reeling in the family to come home for a cozy meal. While the lunch may start with raw crudites and nibbles, it always features a warm, cozy dish as the star of the meal. And this isn’t your usual easy-slap-some-BBQ-sauce-on-a hunk-of-meat American Sunday BBQ! Instead, the cook will usually start preparing the main dish even days before the guests arrive and cook it through the beginning of lunch for it to be perfectly ready when served.

After a meal, some families choose to take a French Sunday promenade–a walk in their neighborhood or to the local park, furry friends welcome. For those who live in the mountains, or in the countryside, this might even include a hike. Others might consider going out for a ballgame in the backyard or sitting outside to take in the fresh air with neighbors. And that’s where the true purpose lies, in coming together as a whole. “No one makes plans, which means everyone has got time on their hands,” Monaco writes on her blog. “Time to visit, time to eat. Time to sleep if you want to. Sunday in France is a time for everyone to just ‘be,’ which often means ‘being’ together.”  Now that is a chill, laidback Sunday. 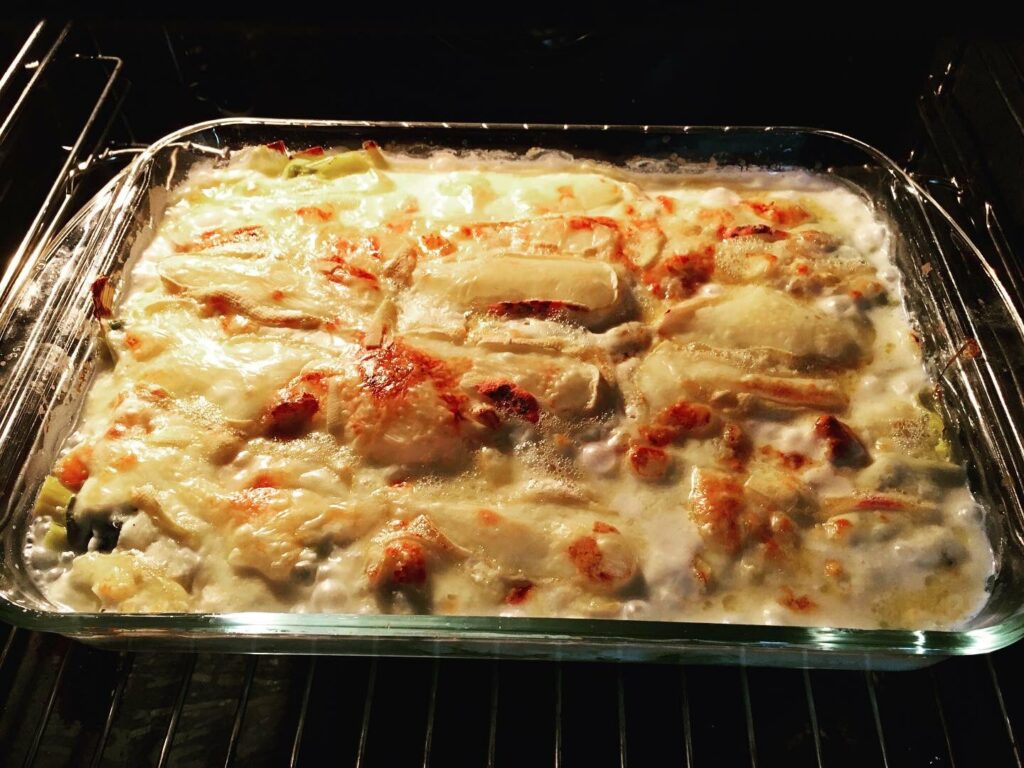 Julie Arzano, a Southerner from Aix-en-Provence, remembers that Sundays, when she was still in grade school, were for homework but that now she can properly enjoy them with the family. In her family, they decide to go out and be active together. “In the summer we go for a boat day on the sea and in the winter we go skiing,” she says.

Some families might head out to les puces, flea markets, which often set up on Sundays. Others might wander around to the park or grab a coffee en terrace, if open. All Sunday activities require minimal effort and yet result is in the maximum pleasure of being together and toning down the work-week rush.

Sunday is a day off for businesses, too. Grocery stores are open until 11am/noon for those who have forgotten to do their shopping the day before and all boutique-type and service businesses are closed. In fact, even some boulangeries take the day off (depending on their ethos, it is either Sunday or Monday). However, there still are plenty of people like waiters and doctors who don’t get a day off– it isn’t a perfect system of repose…yet. But sometimes these things take a couple hundred years to figure out! 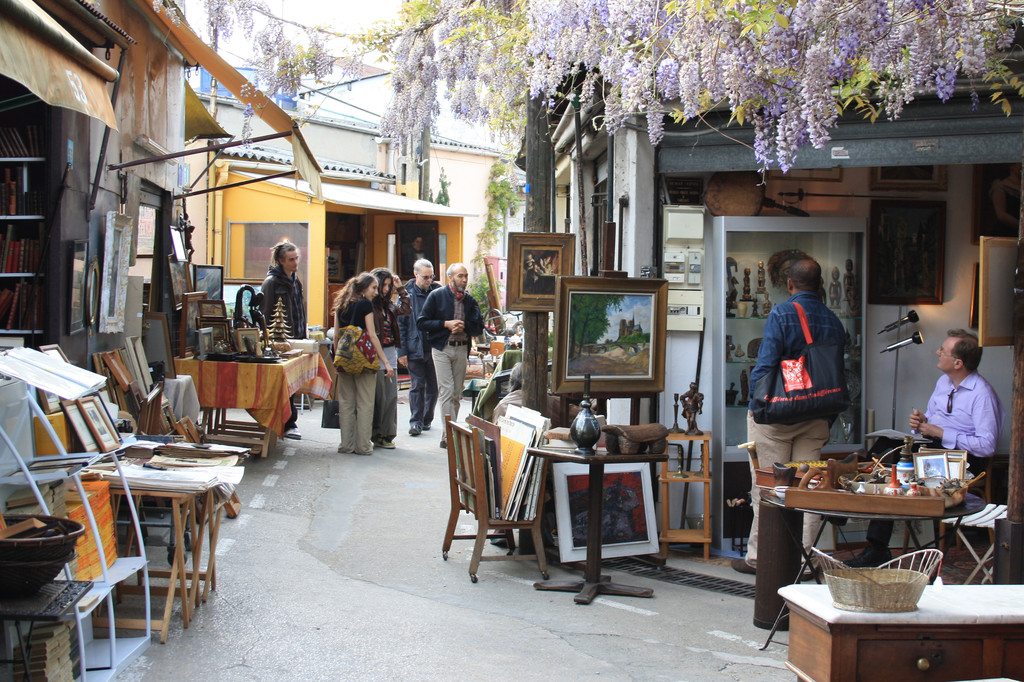 As the world becomes more and more globalized, the Sunday custom is sadly going the way of the dinosaurs. For example, Paris is now a bustling metropolis that cannot afford to shut down completely every Sunday as it is also the world’s most visited tourist city. And still, while the lure of shopping, going places, doing things and keeping everything always open changes the French Sunday ethos, the Parisian Sunday is still more laissez faire than most places, and an attitude of letting things take their own course, without interfering presides.

Camille Bourron, who now lives in Paris, says, “I like starting off the day with a nice breakfast, taking my time and not rushing or anything. Then getting ready and either seeing friends, going to the movies, museums or going for a walk.” Compared to her life in Haute-Savoie, in the Eastern parts of France in the Alps, this is a bit of change, and yet, it still maintains a relaxed and unfettered attitude.

Some Sundays are for “Paris Respire,” or “Paris Breathes,” says the Mairie de Paris. For this, Paris closes its streets to all automobiles on select Sundays of the year. This used to be a monthly practice, but with the pandemic in the picture, it has become a bit irregular. Instead, these days, the streets are open for biking, for walks, ball games, and anything one can imagine, giving the feeling that Paris is a giant, walkable city. By doing this, Paris addresses its sustainable and green values as a city with a promising renewable future, and also gives its inhabitants a French Sunday break. 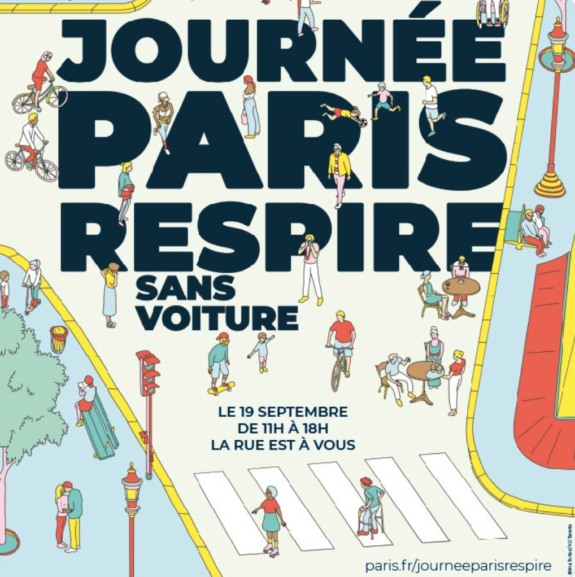 And while the French might take a whole day off, their economy is highly developed, market-oriented, being the world’s seventh-largest economy in 2020. Maybe every country could use a Sunday break, for both their mental and economic health. Everyone deserves to take a breath, enjoy a good meal, and take the day off.