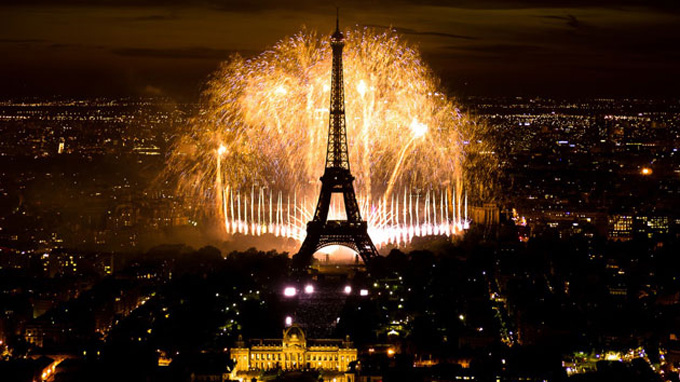 Réveillon 2: Where To Spend New Year’s Eve in Paris

Unsatisfied with one réveillon on Christmas Eve, the French revisit the tradition only seven days later for New Year’s Eve. Like its predecessor, the long New Year’s Eve dinner and party is rife with heavy, luxuriant dishes like foie gras and oysters and the requisite bottles of champagne, but with one crucial difference: no one’s going to mass at midnight. The entire month of January is a wintry avalanche of well-wishing for the new year, with people exchanging cards and gifts right up to the first of February.

If you’re looking for Times Square-level action in Paris, the Champs-Élysées is the place to be most years, but with the mairie replacing the Arc de Triomphe’s fireworks display with a video celebration and closing down the avenue at 8pm, revelers still need a place to celebrate for the four hours leading up to midnight—and for who knows how many hours after.

Neighboring Lido de Paris offers a workaround solution to the Champs lockout with their New Year’s Eve cabaret—as long as you don’t mind the price points, which range from 310€ for a champagne-accompanied show and the chance to dance until dawn on their sequin-strewn stage and a hefty 680€ for all that plus dinner at the place that invented the dinner show.

If you’re looking for a more tourist-approved time, the Moulin Rouge in Montmartre has a slightly cheaper New Year’s Eve option in their Féerie Show soirée, featuring hors d’oeuvres and Champagne Grand Siècle by Laurent-Perrier for 300€ and a dinner-and-a-show variation that comes in at the same 680€ price as Lido’s.

Not that anywhere will be pandemonium this year, but a safe, reserved bet for New Year’s Eve is the plaza of the Basilique du Sacre Coeur in Montmartre, where, after ringing in the new year, you can continue your revels among the crowds or disperse to the many bars downhill from the basilica around Pigalle.

For more strictly nightclub action, Nouveau Casino in Oberkampf (109 rue Oberkampf) is as reliable as it gets, with a packed night planned for Thursday. Canal Saint Martin favorite Point Ephémère will host “Super Freedom,” a special réveillon celebration to usher in 2016 with DJ sets, dancing, and no shortage of revelers dressed up as superheroes for the night.

On January 6th—or the Solemnity of Epiphany, in Catholic liturgy—don’t forget to dig into a galette des rois to celebrate the three wise men/Magi/kings’ visit to the baby Jesus. Why eat a cake with a plastic baby figurine baked into it? Because Frankincense is absolutely inedible.