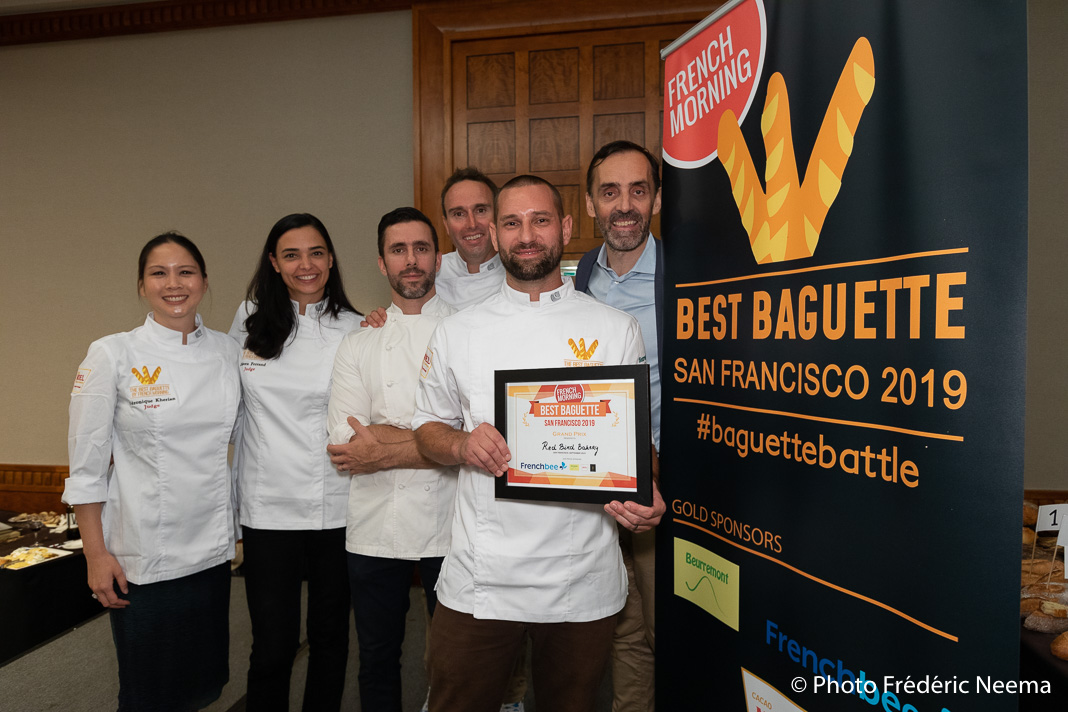 San Francisco has a new champion baker. Red Bird Bakery won the 2019 Best Baguette competition on Friday, September 20. The event, organized by French Morning and Frenchly, was held at the Park Central Hotel and brought together more than 400 bread lovers, American and Francophone. The jury was composed of Débora Ferrand (owner and chef at Mademoiselle Colette), Véronique Kherian (food blogger), Pierre Bee (founder of L’Apéro) and Yannick Dumonceau (pastry chef at One65). Eight San Francisco bakeries were in the running:  As Kneaded Bakery, Canyon Market, Fournée Bakery, One House Bakery, Red Bird Bakery, Sarmentine, Thorough Bread and Pastry and The Midwife and the Baker.

The competition being extremely close, the judges decided to create a jury prize to salute the hard work of Fournée Bakery, the bakery with the second-best baguette. One House Bakery won the Audience Award and Thorough Bread and Pastry cinched the Best Specialty Bread Award. The baguettes were judged on the criteria of appearance, taste, smell and structure once cut.

“Surprisingly, we were all in agreement,” said Debora Ferrand. “We each voted on our own, but when we began to discuss, we realized that we were all on the same page so it was pretty easy after all.” The woman that started Mademoiselle Colette swore that each competing baguette was unique and special. “The one we voted best baguette had a more pronounced taste than the others. It was very airy, crispy. We found all the proper qualities of a baguette, and I think it was made with real yeast, which was perhaps not the case for the some others.”

Pierre Bee agreed. “Two baguettes stood out among the eight finalists: the winner and the one who received the jury prize. We are very happy that our American friends are finally making good bread like we do at home.”

As for the big winner of the evening, Isaac Cermak of Red Bird Bakery, he still can’t believe it. “I didn’t expect it. It’s always nice to win something. We really tried to present a baguette that represented us: unique and traditional at the same time. I have the impression that it has proved its worth. Maybe the next step will be to open a bakery in France and claim to be French… Who knows?”

In addition to the awards ceremony, Best Baguette was also an opportunity to discover local products. The participants were able to taste more than twenty different kinds of bread, charcuterie, cheese, not to mention jam from J’aime Confiture. What more could you ask for? Victoria, 26, was one of those foodies who hadn’t hesitated to fast in preparation for the evening. “I love French-style bread and I really believe that it is difficult to make something better. The structure, the composition, the taste, the crispness… Few bakeries manage to combine all these elements.” Between two bites, she admits that one baguette in particular won her heart (and palate): One House Bakery, winner of the Audience Award. “All the baguettes presented tonight were incredible. I’m going home with four baguettes, that’s proof.”

Photos: Frédérique Neema
Thanks to our sponsors: French Bee, Beurremont and Cacao Noel

The Winners of Best Baguette 2019

All the finalists As Kneaded Bakery, Canyon Market, Fournée Bakery, One House Bakery, Red Bird Bakery, Sarmentine, Thorough Bread and Pastry and The Midwife and the Baker

Thanks to our sponsors: The Park Central, French Bee, Beurremont et Cacao Noel.