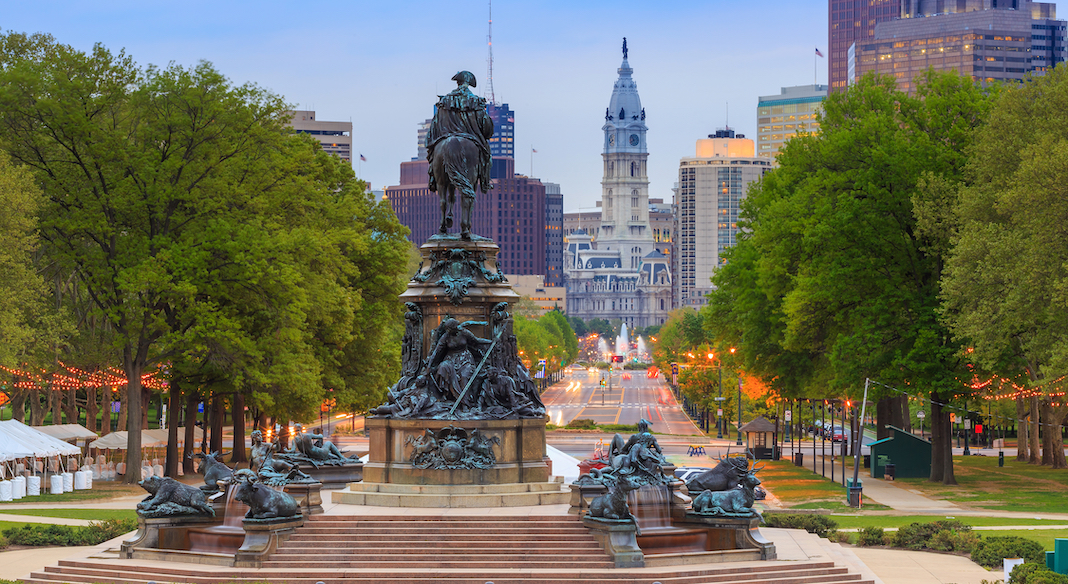 Where to Find France in Philadelphia, Paris’ Sister City

During and immediately after the American Revolution, the nascent United States found an unlikely ally in France. Both countries had reason to burn bridges with Britain, and their post-war relationship was solidified thanks to the work of Benjamin Franklin, the US’s first Ambassador to France. The American inventor, author, politician, and mascot for everything Philadelphian brought many French aesthetics and modes of thinking back with him to his adopted city. Walking through the streets of America’s birthplace, a surprising number of similarities appear, a myriad of incidental Parisian homages. From the deliberate architectural design thefts of Paul Cret and Jacques Gréber, to the Haussmanized restructuring of the city’s boulevards, the City of Brotherly Love is an unlikely—but unmistakable—sister city to France’s capital.

In the 1970s, French chef Georges Perrier brought a new wave of French cuisine to Philly with Le Bec-Fin, a fine dining experience that received countless awards including best restaurant in America. Though closed now, its legacy lives on in places like Bistrot la Minette, a purveyor of hearty French bistro fare in a delightfully eclectic setting adorned with art nouveau textiles and photographs of France. – 623 S 6th St.

Another classic is Bibou, a cozy cash-only BYOB restaurant with a tasting menu for *only* $115, so don’t forget to pack a few Benjamins. It’s non-pretentious feel lends an extra sense of awe towards the chef’s artistry, with each dish its own Degas in a dime-store picture frame. – 1009 S 8th St.

Vintage Wine Bar & Bistro in Midtown Village is not only the wine bar you want, but the wine bar you deserve. You can order over 60 different wines by the glass, either solo or in flights. The menu is classic French pub food, complete with mussels, escargot, and some of the most beautiful charcuterie platters known to man. Snuggle up in the cozy exposed brick interior or opt for open-air dining at a cafe table just outside. – 129 S 13th St.

For anyone who has ever been to Paris, coming face to face with Philadelphia’s City Hall for the first time is a disconcerting moment. City Hall looks like a life-size replica of Paris’s major municipal building, Hôtel de Ville, from its blue-gray slate rooftop to its elaborate Second Empire molding. The only main difference is the famous statue of William Penn that crowns this goliath, which was the tallest point point in Philly until 1986. -1401 John F Kennedy Blvd

Starting at City Hall and culminating in the Philadelphia Museum of Art is the Benjamin Franklin Parkway, a wide boulevard and quasi-park explicitly modeled after the Champs-Élysées. Designed by Paul Cret and Jacques Gréber, architects trained at the École des Beaux-Arts in Paris, the parkway was designed to beautify Center City and give the area a more relaxed, less congested, and European feel. Check out the statue of Joan of Arc by Emmanuel Frémiet. There are only two others in the world, both in France. – view map here

Philadelphia is home to the world’s second-largest collection of works by French sculptor Auguste Rodin, only exceeded by the collection housed in Rodin’s former residence in Paris. The small but exquisite Rodin Museum, constructed in the Beaux-Arts style, is another masterpiece by Cret and Gréber. The museum contains everything from The Thinker to The Kiss to its own Gates of Hell, in addition to a statue of bodybuilder Samuel Stockton White III, the only Philadelphian Rodin ever immortalized in bronze. – 2151 Benjamin Franklin Parkway

While you’re on the Parkway, why not stop by the Philadelphia Museum of Art, one of the largest and most-visited art museums in the world. The facade was borrowed from La Madeleine in Paris, but with added wings on either side reminiscent of the Louvre. – 2600 Benjamin Franklin Parkway

Also on the Parkway, The Barnes Foundation holds the largest collection of works by August Renoir in the world, with 181 pieces, along with 69 by Cézanne and 59 by Matisse. – 2025 Benjamin Franklin Parkway