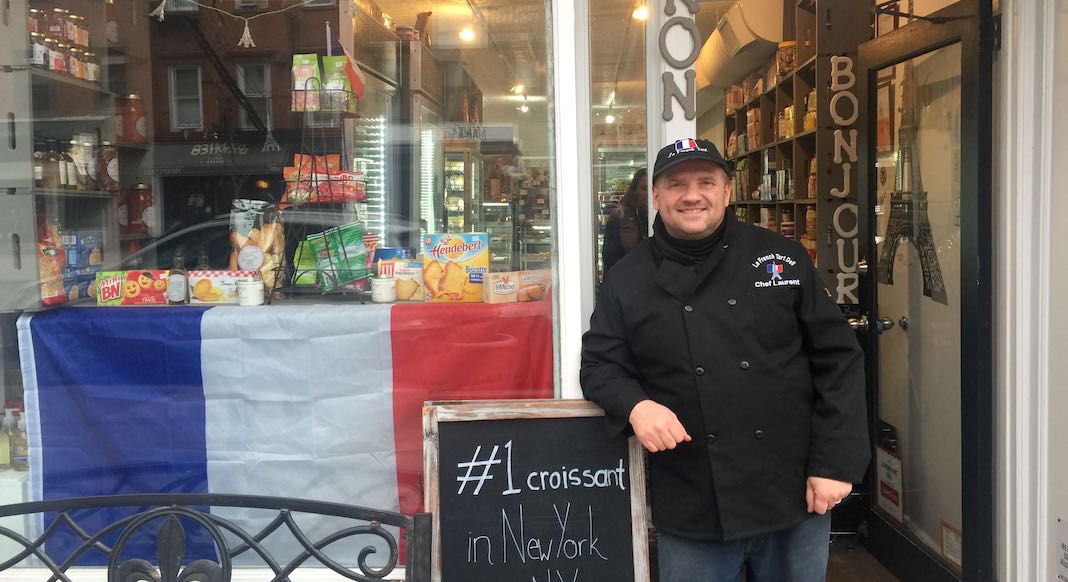 This treasure trove for nostalgic French expats and Francophiles opened on February 1, 2020 on Court Street in Carroll Gardens. “We couldn’t be more French,” remarks Chavenet.

Chavenet, the grandson of a grocer, is also the founder of French Tart, a boulangerie-pâtisserie shop which opened in Park Slope three years ago. “I was adding more and more grocery products there. When I saw that there was a demand, I figured my next business would be an épicerie fine,” he explains, using the French word for specialty store. “In almost 20 years in New York, I’ve met a lot of suppliers of French products. I gathered all my finds in one place.” His current location, previously occupied by a Lebanese restaurant, was vacated last year. He signed the lease on December 24. “It was my Christmas present!”

A French flag in the window, a big “Bonjour” written at the entrance, French music inside… French Tart Deli is a little piece of France in Brooklyn. In addition to charcuterie, sweets, mustards, cereals, limonades, cheeses, pasta, and biscuits that compete for the shelves, there’s also bread, crêpes (“with buckwheat from Brittany,” he adds), pastries, macarons, sandwiches, and tartes. “It works because I have everything here. If the grocery store, boulangerie, pâtisserie, charcuterie and fromagerie were separated, it would be more difficult. When one side is slow, another takes over,” he explains.

Chef at the Montrachet restaurant in Manhattan before launching his first French Tart on Staten Island in 2001, Chavenet now divides his time between his two Brooklyn establishments and the original French Tart. “It makes you work,” he admits. “At the Deli, I see French-expat parents explaining to their children what a Malabar or Carambar is. Though the children don’t always understand, we can bring everyone some joy with these little things.”