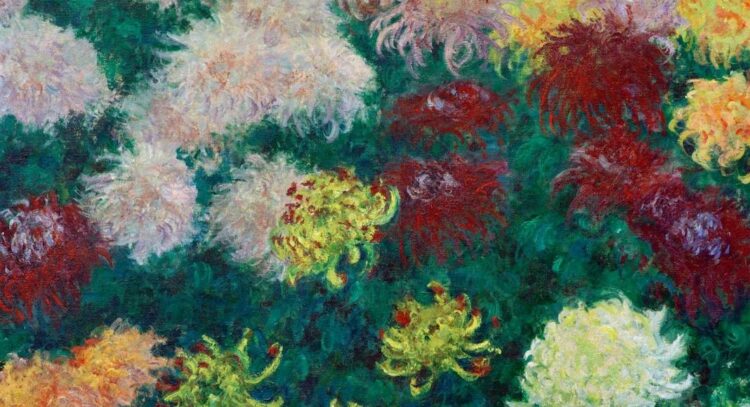 The Musée de l’Orangerie may not compete with the Louvre or the Musée d’Orsay in terms of scale, but this tiny museum in Paris’s Jardin des Tuileries punches above its weight. Its permanent collection includes two rooms specially built to house Claude Monet’s Water Lilies (or Les Nymphéas). Though Monet painted hundreds of works on these aquatic flora, the eight panels in the Orangerie, divided between two egg-shaped rooms, are his most iconic and striking works. Each one is 6 feet tall, and lined up side by side, they would measure an impressive 298.5 feet. Inspired by his gardens at Giverny, the paintings are a product of the artist’s twin interests: painting and gardening.

Monet began working on the Nymphéas in 1914, and dedicated his last years to this singular obsession. The artist donated the panels to the French state in 1922, and they were on display for the public starting in 1927, shortly after Monet’s death. This arrangement had been facilitated by the French prime minister, Georges Clemenceau, with whom Monet had a close friendship. Clemenceau convinced Monet to donate the panels, though at the time there was no location in mind for their presentation.

Le décor impressionniste: Aux sources des Nymphéas is a new exhibit at the Orangerie, running from March 2 through July 11, 2022, which explores a rarely seen side of the Impressionists: their forays into decorative arts. Artists including Mary Cassatt, Paul Cézanne, Edgar Degas, Edouard Manet, Claude Monet, Berthe Morisot, Camille Pissarro, and Auguste Renoir all took turns in their lifetimes making functional decorative artworks like ceramics, glassware, fans, mirrors, and above all, decorative tapestries. Often, they used these projects as opportunities to experiment, as these items would be showcased in private homes, far from the prying eyes of the public and the art world. 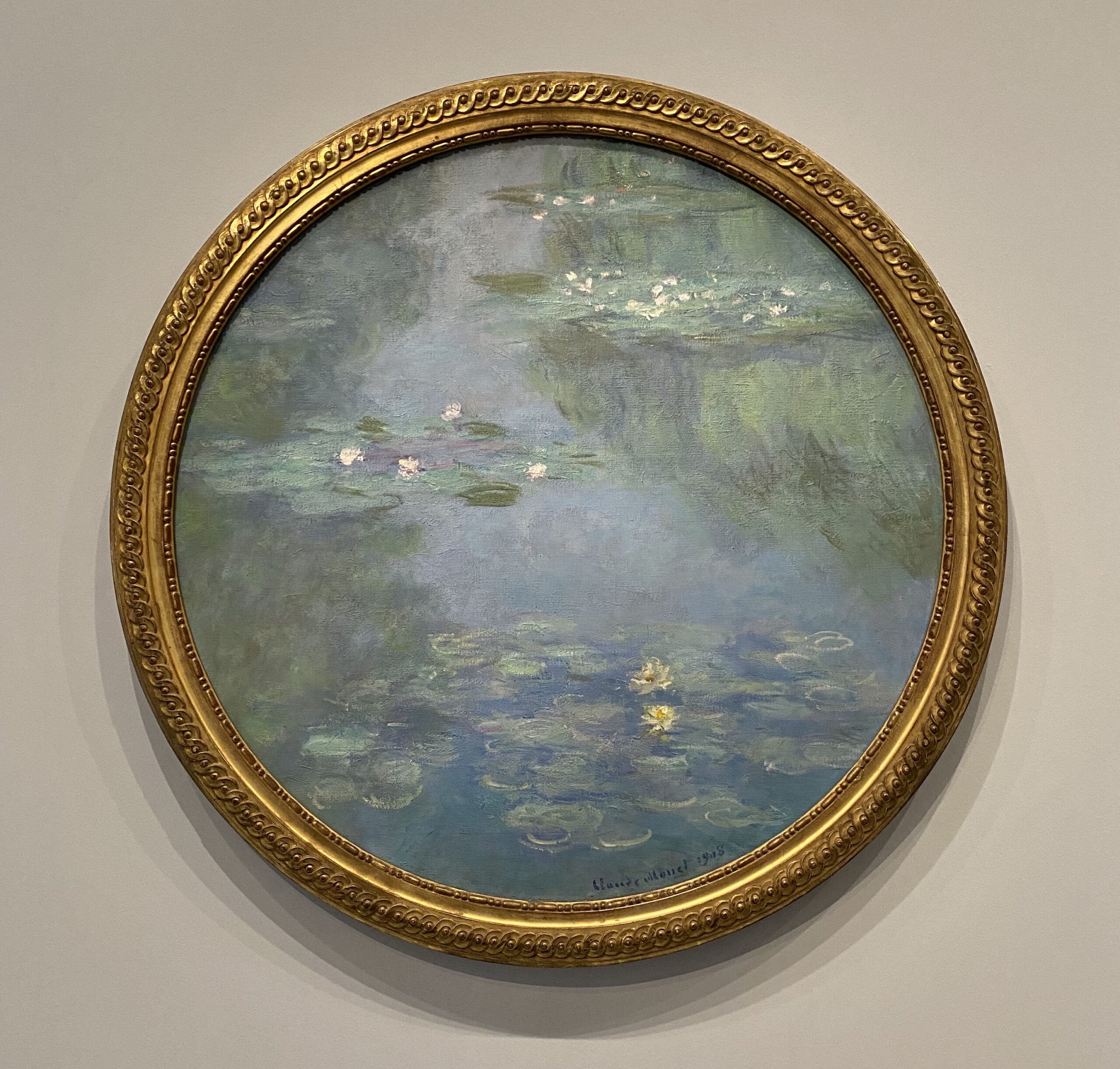 A common theme among these works is that they were often commissioned by the parents or close friends of the artists, lending them an intimate quality. But there is a sense of showmanship, of a need to impress, nonetheless: the paintings tend towards bold subject matter and vibrant colors. Several of the collections focused on “the four seasons,” demonstrating the allegorical and distinctly nature-oriented subject matter common to late 19th-century home decor. Flowers, of course, are another motif, often inspired by Japanese prints. In fact, the influence of Japanese artwork was so strong that Monet himself imported colored water lilies to populate his gardens in Normandy, though up until 1899 only white water lilies existed in Europe.

Thus, Monet’s works are a testament not only to the artistic trends of the time, but to the advances in horticulture in the second half of the 19th century. Both he and Gustave Caillebotte were avid gardeners, who constructed greenhouses in their homes in order to be able to paint flowers no matter the time of year. Among Caillebotte’s works on display are a set of trompe l’œil “doors,” which create the appearance of looking in on a greenhouse, an ersatz duplicate of the real one he had built. 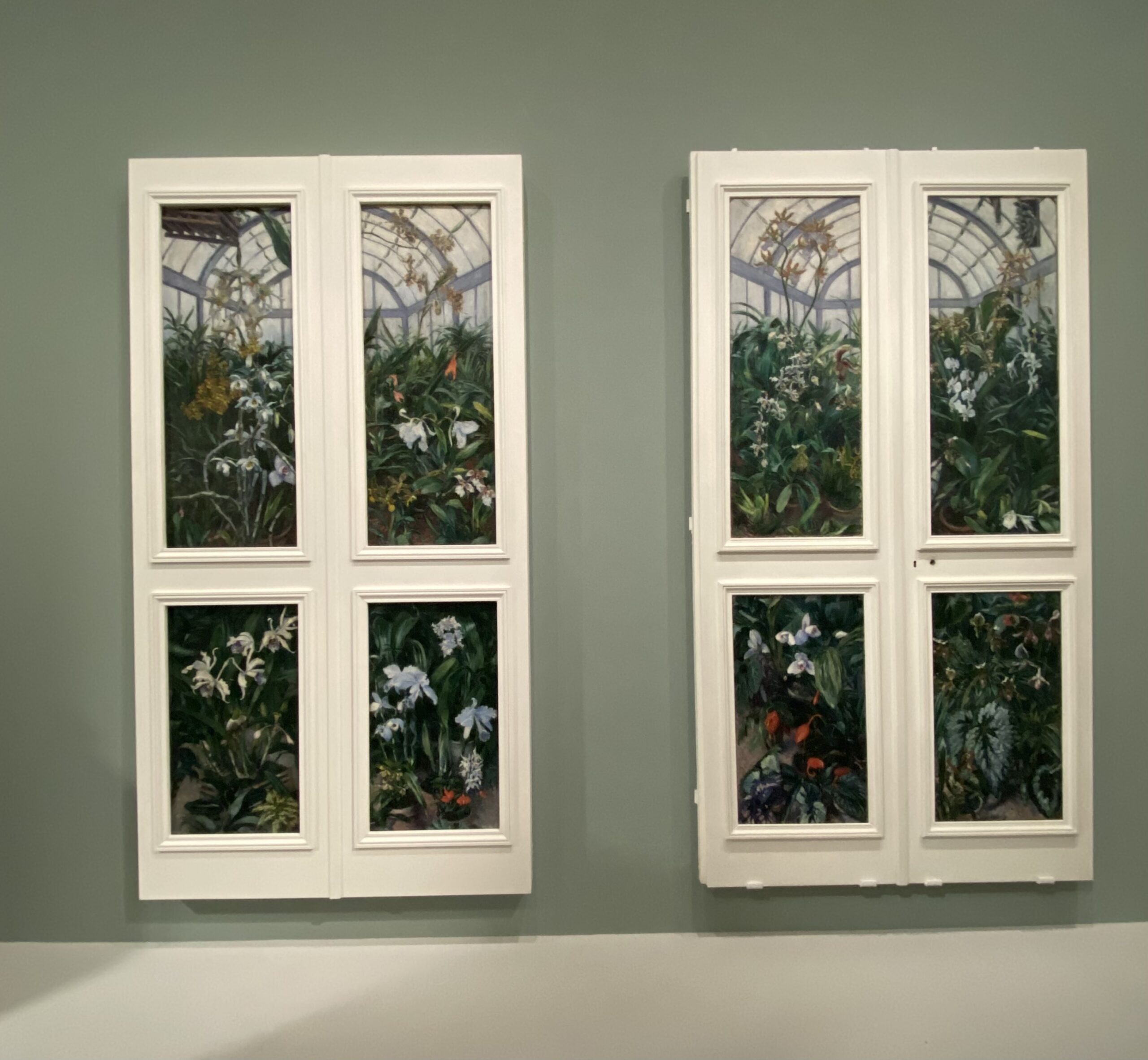 It was incredibly common for decorative panels of this type to mimic the grounds around them, blending interior and exterior in a collision of nature with domestic life. Over time, the grounding and framing elements of Monet’s paintings disappeared, such as the riverbanks and accompanying landscapes, until only the waterlilies remained, plunging viewers straight into the water. This is where the meditative nature of the paintings comes from, through complete immersion. It’s no wonder that Monet’s works are the perfect subject for the new “immersive experience” craze, which began with light projections of Van Gogh’s works at the Atelier des Lumières in Paris. Monet practically invented the genre.

In addition to panels and tapestries, the exhibit contains painted ceramics, a favorite of Degas, Pissarro, and Renoir. There is also a wall of exquisite fans painted by Pissarro, Degas, and others, an experiment in framing that lends itself well to elegant pastoral scenes. Rugs, glassware, and silk room dividers inspired by Monet’s Water Lilies are also on display. 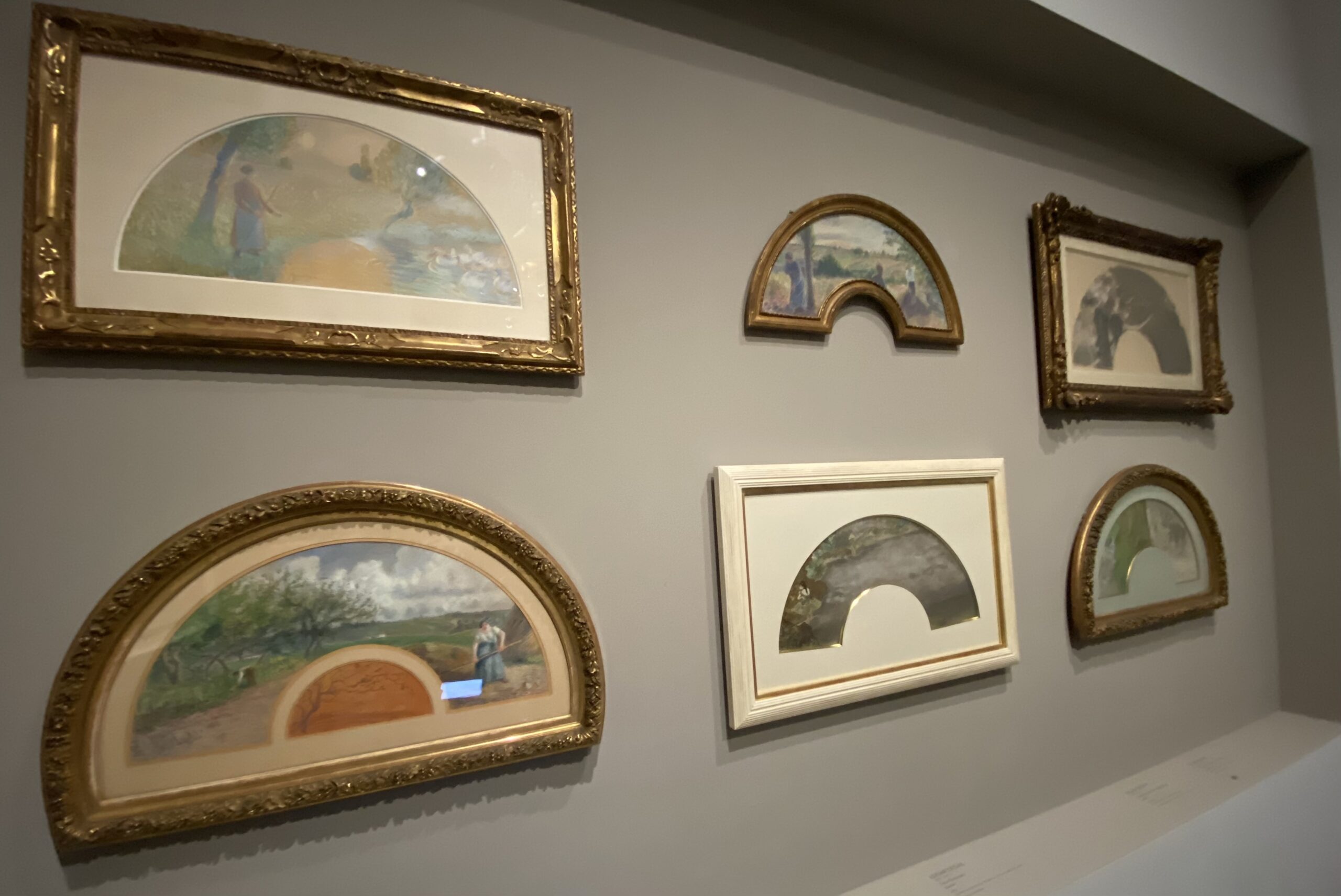 Through the exhibit is dedicated to the Impressionists, not all of the works on display could be strictly called Impressionistic. The sense of ephemerality created by Impressionist paintings clashed, at times, with the timeless appeal of classical art, which some artists felt was more appropriate for the functional nature of decorative works. Renoir, for example, advocated for “a return to 18th Century practices and techniques, when the making of objects resulted ‘from a mind and from a hand.’” High art met artisan crafts in this liminal space, where artists were drawn to the decorative arts both as a means of stable income from practical projects, and as an excuse to get creative. Beginning from a place of practicality, these projects evolved into spaces of pure imagination, freed from the boundaries of traditional art. Without these experiments, the Nymphéas might never have been painted, and the world would be at a loss for some of France’s greatest artworks.