An Immersive Monet Exhibit is Coming to San Francisco in 2021

With immersive Van Gogh exhibits flooding the market, it’s not surprising that another uber-popular artist would get the same treatment. Monet by the Water, an immersive experience dedicated to the works of French impressionist master Claude Monet, is coming to San Francisco this December, with follow-up tours planned in Minneapolis, Atlanta, Seattle, Miami, Denver, St. Louis, and Philadelphia. The exhibit, which runs about an hour long, will showcase more than 300 works of art on 26-foot-high projection screens, accompanied by an original score. The location is being kept secret, but the exhibit’s producer, Ricardo Dotta, dropped that the exhibit will take place in a massive 5-story circus tent. “We got inspired by the tradition of circuses,” explains Dotta. “We designed this very meticulously to have the best experience possible… so the guests who visit in Miami will have the same experience as those in San Francisco.”

Dotta and his company put together a team of illustrators, animators, artists, composers, and musicians in order to analyze Monet’s paintings and try to recreate the images through his eyes. The exhibit is divided into chapters, “taking you on a journey through his life,” not chronologically, but rather by theme. “It’s a labor of love. The work that the artists did to create this took it to a completely different level,” Dotta says. “I think guests are going to be delighted.” 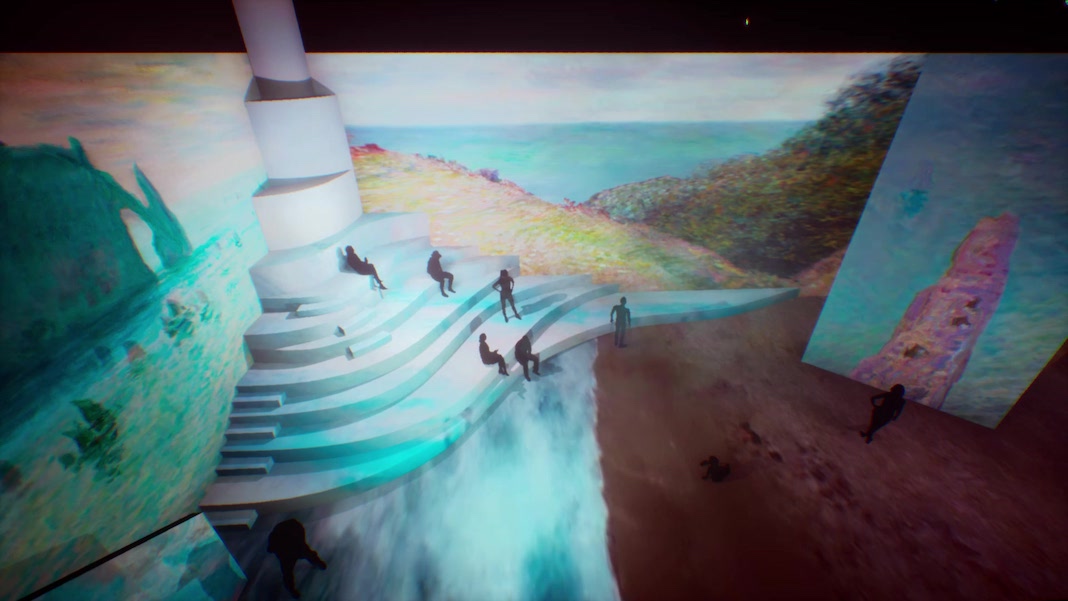 Dotta is the co-founder of MIRA, the Museum of Immersive Roaming Arts. The Brazil native arrived in Silicon Valley 15 years ago to work in product design, but always knew he wanted to be involved in arts and education. Two years ago, he left his job to start MIRA, where he has been constantly inspired by his own two children to try and develop ways of connecting young people to art using technology. “Smartphones are always in their hands,” he says, laughing, “So I’ve been thinking, how can we use this instead of letting it be a distraction, complementing the experience in a way that actually helps them understand more about the context?”

He talks about the struggle of visiting crowded museums and pushing past people to get a glimpse of one or two famous paintings, and expressed a desire not to replace the experience, but to enhance it. “It invites access,” Dotta says, mentioning that their goal is to target people who might not normally go to museums, forging a connection so that the next time they encounter a painting in a museum, they might view it differently. “I think there’s a lot of opportunity there of actually creating amazing experiences and opening the doors to people who maybe aren’t as connected yet to art.”

Dotta references Monet’s Water Lilies at the Orangerie museum in Paris as a prime inspiration, and perhaps as a predecessor of “immersive” art, mentioning that Monet was quoted as saying of the paintings that he wanted to create “the illusion of an endless whole, of water with no horizon and no shore.” The canvases were so large that he had to build a special atelier to work on them, much like MIRA has had to utilize new technological forms to achieve their vision on an unprecedented scale. “He was basically a pioneer for immersion. He wanted to put people inside his amazing art,” says Dotta. “In a small way, we are continuing his work.”

You can expect to see Monet’s iconic works, like the Water Lilies, but the exhibit will also cover lesser-known paintings that might be better suited to the medium. “There’s a bunch of paintings he has of the sea, where you just see the sky and some waves… but when you get inside, you’re going to be completely enveloped by the ocean…. I truly feel that that painting, and that particular vision that he had is going to be surprising to people, how powerful that painting actually is.”

Dotta sees this exhibit as part of a larger movement using technology to expand our artistic horizons. “We see immersive art as something that’s going to be developed a lot in the next 10-20 years, and we want to be at the forefront of that.” Uniting virtual experiences with nature is something Dotta sees as being incredibly relevant in life and art in a post-pandemic world, contributing to the popularity of these kinds of immersive experiences. “We feel that art has this power of bringing hope to people, and I feel like the art we made inspired by Monet is going to help people, in a small way, in recovering from this very very hard 18 months with the pandemic raging around the world, and bring nature to them in a way they maybe haven’t seen before.”

Tickets for Monet by the Water are not yet available, so you will have to sign up for their waitlist to join the throngs eagerly awaiting a ticket sale announcement.