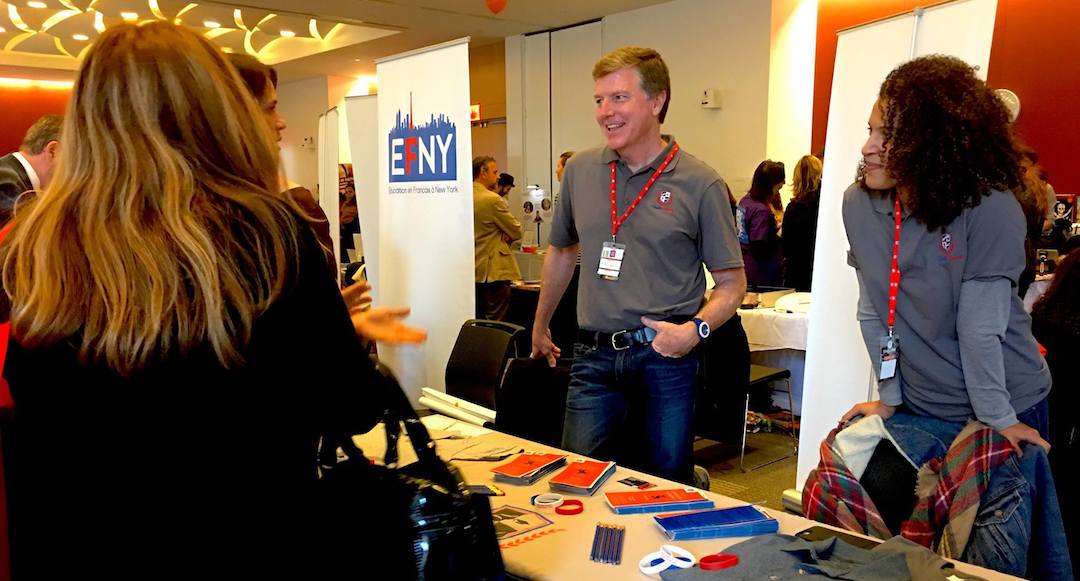 “Being multilingual is a public health issue”: Bilingualism in the Spotlight

Up and down the aisles of the main hall at the Bilingual Fair of New York, organized by French Morning, bilingualism and multilingualism were touted proudly. With the bilingual revolution still going strong, parents and kids are seeking bilingual learning opportunities. “In some countries, people think that speaking two or three languages is too much,” explains Fabrice Jaumont, education attaché at the French Embassy in New York and author of The Bilingual Revolution. The expert believes the contrary, enumerating a “long list of benefits” for multilingual individuals. “There are obviously economic, cognitive, and developmental benefits. But recent scientific studies also show that this has an impact on aging.”

In addition to improving attention and memory, various studies have shown that practicing several languages can delay the onset of Alzheimer’s disease and dementia. “In the end, being multilingual is a public health issue,” continues Fabrice Jaumont. “We have to invest massively in this kind of education.”

When she was 4 years old, Tabetha Kiraz spoke three languages: Aramaic, Turkish, and Arabic. Now 16 years old, this high school student from the Rutgers Preparatory School in New Jersey says she is “only” bilingual in Aramaic and English. “When I was little, my teachers were concerned about my multilingualism,” she said at the fair. “They were afraid that my learning these languages would slow me down in the other subjects, which were taught in English. They convinced my parents to make me give up Arabic and Turkish.”

This bilingual teenager won the fair’s essay competition for 7th-11th grade students in the New York area. Launched for the first time this year by French Morning, this competition rewards the best essays written by students on the theme of bilingualism, a notion dear to Tabetha. “When you speak a language, it becomes part of you,” she says.

The power of parents

Milady Baez, deputy chancellor of the New York Department of Education, who gave opening remarks at the Bilingual Fair, is working to create more bilingual programs in the city. “This type of education should be accessible to all, not just the elite. Educators and parents have noticed that bilingual children are becoming more tolerant and respectful adults,” she says, adding that “through languages, we can build a better society.”

In September, 68 new bilingual programs opened in New York City’s public schools. This has been made possible in part because of the motivation of parents, who advocate for these programs and put pressure on school leaders to open such classes.

In the exhibitors area of the fair, curious parents came to meet potential future schools for their children, including La Petite Ecole, the French American Academy, the German International School New York, KinderHaus, and La Escualita.

“We have seen a real trend in recent years,” says Baez. “Parents now come to us to ask us to open bilingual programs. They’re a lot more involved than before.”

Tatyana Kleyn, the director of bilingual programs at City College in New York City, is delighted with the enthusiasm. She was a speaker at the fair, and shared her experience as a young immigrant girl from Russia in New York. “I learned English very quickly and I didn’t use Russian any more. At home, my parents spoke to me in Russian but I answered them in English. It’s unfortunate,” she explains. Tatyana Kleyn would have liked her parents to have been able to open a bilingual class at the time. “Fathers and mothers must make their voices heard. There are so many things they can do. They have power like they don’t even know.”