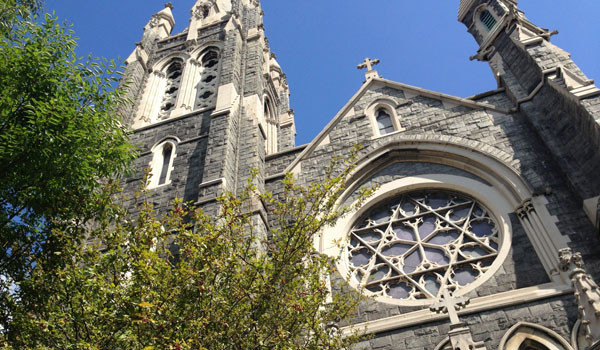 There were only a handful for the first mass, very few French speakers, but it’s a start:  the diocese of Brooklyn has decided to encourage larger and larger flocks of French to come to the borough.

Every Sunday at 11am, mass is now celebrated in French at the Church of St Agnès in the Carroll Gardens neighborhood. Father Paul Anel, a Frenchman from the Ariege region in France (bordering the Spain), settled in New York 6 years ago. He came here with the Point Coeur association and deals with the branch situated in one of the projects in Fort Greene.

“It’s the first time I’ve had a regular mass” the young priest (36 years old) says. “It was the diocese that had the idea”, he explains, “as there are more and more French families here, they wanted to offer them this mass.” The parish already has many masses in Spanish, but none in French. There are also several masses in Brooklyn celebrated in Haitian creole.

This intiative of the diocese of Brooklyn occurs after the neighboring diocese, that of Manhattan, incurred the wrath of French worshipers in New York by deciding to close the French church of Saint Vincent de Paul.

Brooklyn hopes to retrieve a portion of the worshipers from the Saint Vincent de Paul community, of which many have not joined the Church of Notre Dame in the north of Manhattan (114th street), designated by the diocese as the “center of the francophone community.”

All the French Beauty Vocab You Need to Know

All the French Beauty Vocab You Need to Know