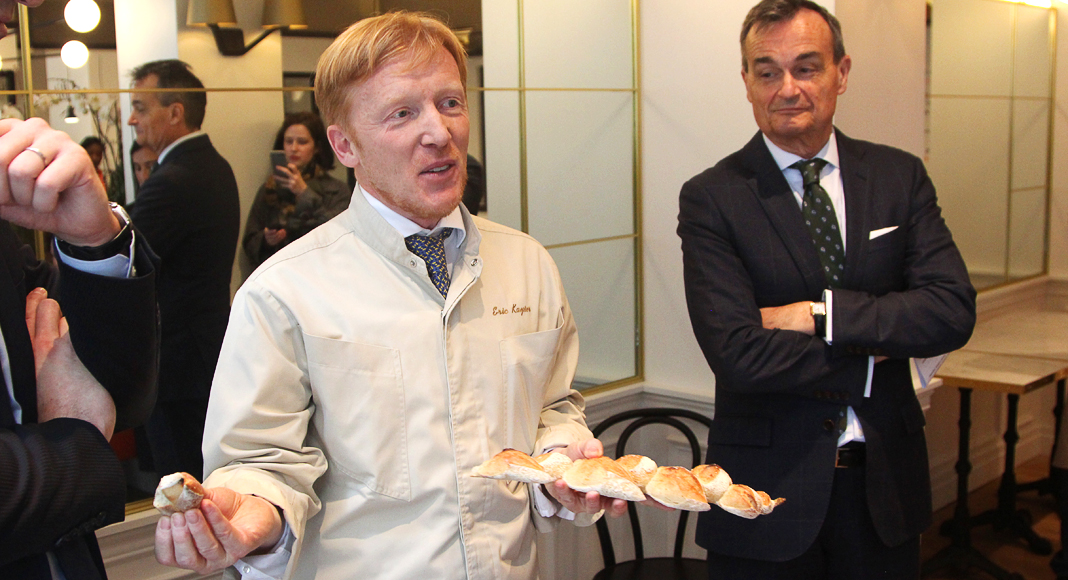 From its home base in the Latin Quarter of Paris, Maison Kayser has been spreading its bakeries all over the world. Finally, Maison Kayser arrives in Washington DC. In February, two stores appeared almost simultaneously in the downtown heart of the nation’s capital. The first (1345 F St. NW) opened on February 8, and the second (650 Massachusetts Ave. NW) will open on February 22.

In a very welcoming market, Eric Kayser enters with his know-how, and some experience in exporting French bakery products. From Chile to the Philippines, from Senegal to Saudi Arabia, Maison Kayser is present on all continents, but only in two cities in North America: New York (16 stores) and Mexico City.

“We are above all craftsmen, we make the dough and cook it on location,” insists Eric Kayser, at the opening of the F Street store on Monday, February 12, reminding us in case the size of his company and bakery hardware suggest otherwise. “You could say we’re post-traditional.”

“Chefs come from France to pass on their techniques,” he says, but even if the savoir-faire is imported, all products are still made local. The only exception: the “ancien” wheat flour, a flour that is, for the time being, only available in Paris.

“It’s wheat from Burgundy whose seeds date back to the 19th century,” explains Kayser. “It’s very expensive to grow because the yields are very low, but nutritionally it’s fabulous. And since we need a certain savoir-faire for flour, we have to import it from France.”

For the rest, the followers of the French bakeries will not be disappointed, with a vast choice of baguettes, breads, viennoiseries, pastries, and sandwiches available… everything is there.

Invited to cut the ribbon with the owner, French ambassador Gérard Araud welcomed the success of French bakeries in the United States. “Nearly 1,000 jobs have been created by Maison Kayser in the United States,” he said in a short speech. “We see that bakeries are good businesses that fit in well with the revitalization of American city centers.”

According to Kayser, Washington is a “city of gastronomy and culture,” giving it the perfect profile to host the next Kayser bakery.

While bread is of course an important part of Kayser’s business, the company has also adapted to the American market. Open seven days a week from 7am to 10pm, the bakery also serves as a café and restaurant where you can taste traditional beef Burgundy, croque-madames, and other classic French dishes.