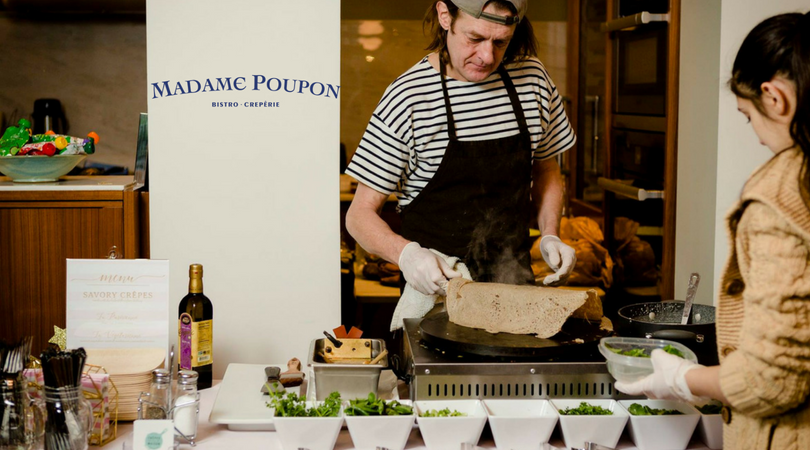 Some like them sweet, others savory. No matter what you like, you’ll be pleased to know that the traditional Breton crêpe has arrived in Bed-Stuy.

At Madame Poupon, exposed brick walls surround a space for 20. On one wall, a big chalkboard with information on the Bretagne region, its crêpes and its galettes. In the kitchen, patrons can look over the kitchen counter, wooden with white chairs for casual dining, and see into an open kitchen.

It’s behind this counter that Jean-Christophe Henry, the owner of the place, now spends most of his time. The Frenchman from Brest has devoted a large part of his life to the restaurant industry. He began his culinary education learning “on the job” cooking in Brittany alongside his cousin, then in other restaurants.

He arrived in New York 20 years ago and immediately took a liking to it. “I’ve always loved big cities,” recalls Henry. “And here you can easily meet people or start a conversation with strangers. That’s what I love about New York.”

After having worked for several years in the restaurant industry in the United States, he moved into his own space at the front of Theatre 80 Saint Marks, located on Saint Marks Place. Confined in his new small space, Henry cooked and served crêpes six days a week. Little by little, his establishment gained notoriety in the neighborhood. Crêpe Canaveral became a must for late-night East Village partygoers. He ended up closing his small business at the end of 2015, but the restaurateur still has “excellent memories of this time.” his dream hadn’t ended though, and he started looking for another place.

He eventually moved into an old art gallery on Nostrand Avenue in Bedford-Stuy. In July, Madame Poupon opened her doors. “Madame Poupon is a family friend. She gave me her recipes and her savoir-faire, which I use for all the crêpes on my menu.”

But what is this famous recipe? Nothing mysterious: tradition from southern Finistère, a French department in western Bretagne, mixed with carefully selected ingredients. “The quality of the products is really paramount. Everything is homemade and I really choose my products meticulously.

A cross between a crêperie and a small bistro, customers can enjoy a sweet or savory crêpe, charcuterie boards to share, a soup, a tartine or a salad. “Most of my customers are French, so I do a lot of free tastings to try to seduce the Americans in the neighborhood,” says Henry.

And even though the Bretagne menu currently displays nearly 20 different crêpes, Henry has no intention of stopping there. “It’s important, otherwise you get bored,” he explains. The “Jambon Complete” is the current bestseller at Madame Poupon, but, for the chef, no one crêpe is better than another. “I love all the crêpes I offer,” he says with a smile. From the “Pastrami complete” to the “Marseillaise,” the “Caramel beurre salé” or the “You’re Nuts Ella,” the chef’s imagination is limitless. In the future, he’s hoping to offer seafood: “we’re by the ocean, and I would really like to take advantage of my experience gained in Bretagne to offer quality products.”