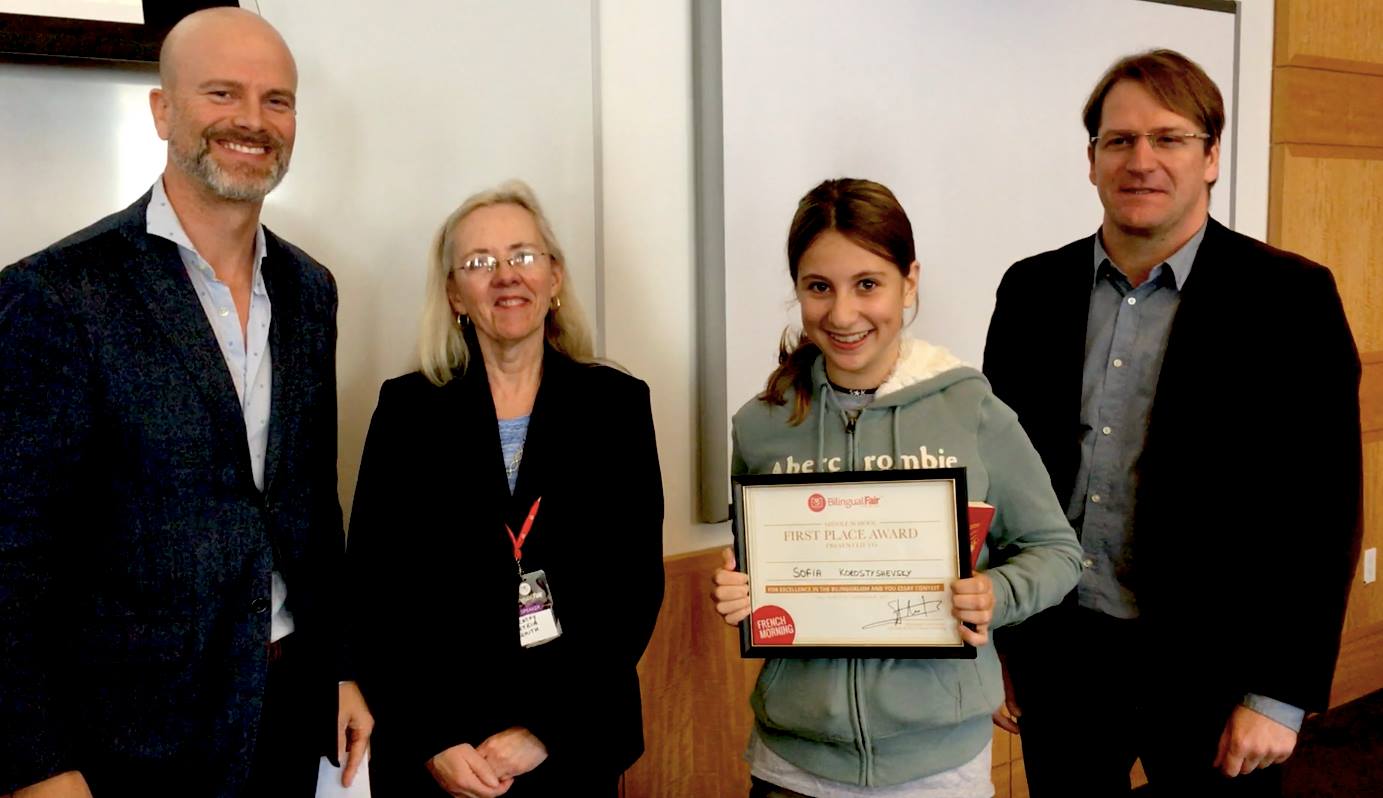 “Letter to My Great-Grandfather”

“Letter to my great-grandfather” by Sofia Korotstyshevsky, a 7th grader at NEST+m

Instead of writing an essay, I decided to write a letter to my Great Grandpa who moved to New York from Russia and who I never got to meet. In it, I tell him how much it means to me to be bilingual in Russian and English.  He never learned English, but I know that he tried.

I wish I had gotten a chance to meet you.  I found your diary on a dusty shelf a few weeks ago in your old apartment. My babushka let me have it. There are two pages filled with messy and misspelled English words that I think you were trying to learn. I don’t know if you remember, but you were writing about “Jefferson,” “Washington,” and the “White Hous.” I am bilingual and I wish I could have taught you some English.

I am your eleven-year-old great granddaughter. I started learning English in preschool, but back then I mostly spoke Russian. Sometimes kindergarten was challenging, because I had to speak English, strictly English. It felt like I knew a language and a half, and the half was English. I constantly mixed languages and I would say things like, “Can I please have a salfetka (tissue)?” The teacher would look puzzled and put her hand to her forehead and ask what a sal-fat-ka was? I would take that as a yes, and run up and take a tissue anyway. Eventually, in second grade, I became fluent in English. It was finally possible to properly socialize with my classmates, though I still blurted out Russian words when I got mad. Even now when I lose my temper, I mutter Russian phrases under my breath because they are more creative than exclamations in English and make me feel better. For example, did you ever recite a part of the Russian alphabet when you got frustrated? I like to say “o-puh-arr-seh-teh.”

I am so lucky to be able to share the gift of two cultures. Some kids at school suppress their heritage because they are ashamed of their culture. I, on the other hand, am proud of my ability to speak, read, and write in Russian. It means so much to me because I can communicate with my relatives, including the ones in Russia who live in Samara, as well. I hope I can go to Russia one day and see where you and babushka lived in Samara.

I have loved eating all of the traditional Russian foods ever since I was a baby. My other babushka makes really good borscht from a secret family recipe. Maybe you’ve tried it and you liked it, too. I hope I can learn to make it one day. I also like kartophilnye pelmeni (potato dumplings) and chicken soup, which people think is American but it’s actually Russian because Russians ate it first.

I’m glad you got a preview of what my life is like. I wish you also got the chance to be bilingual so you could understand my perspective as a bilingual Russian-American eleven-year-old girl. I am so happy that you got the chance to live in America and that I am both American and Russian and able to communicate with my Russian family who don’t speak English. I plan to preserve our heritage and to continue speaking Russian and to pass on our language, and the stories of our family and our culture.