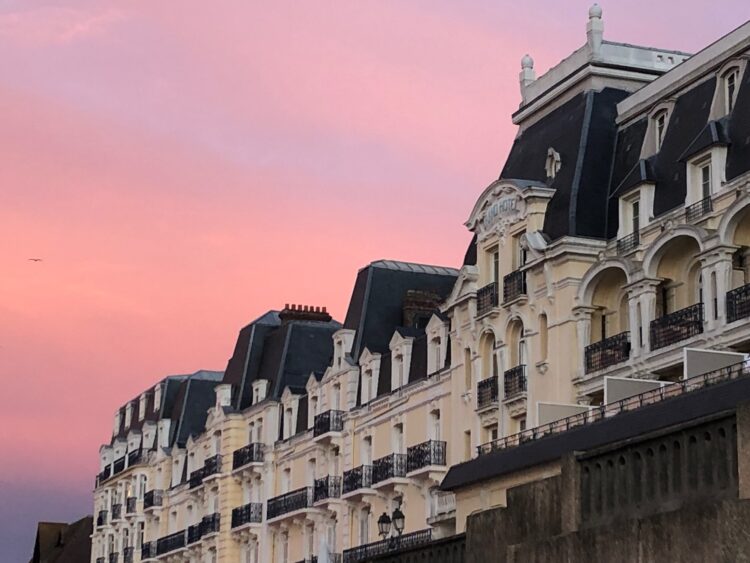 Letter From Normandy: Remembrance of Wars Past and Present

Last Friday, the usual buzz of excitement at the Gare Saint-Lazare was decidedly muted. Echoes of a dreaded European past are surfacing as Putin’s war on Ukraine takes over the news, social media, and just about everybody’s mind.

I was headed by train from Paris, where I live, to Cabourg, a seaside town in Normandy that’s become a favorite getaway. Cabourg was made world-famous by Marcel Proust, who frequented the ocean facing Grand Hotel and featured the town under the pseudonym “Balbec” in his seven volume novel, In Search of Lost Time. 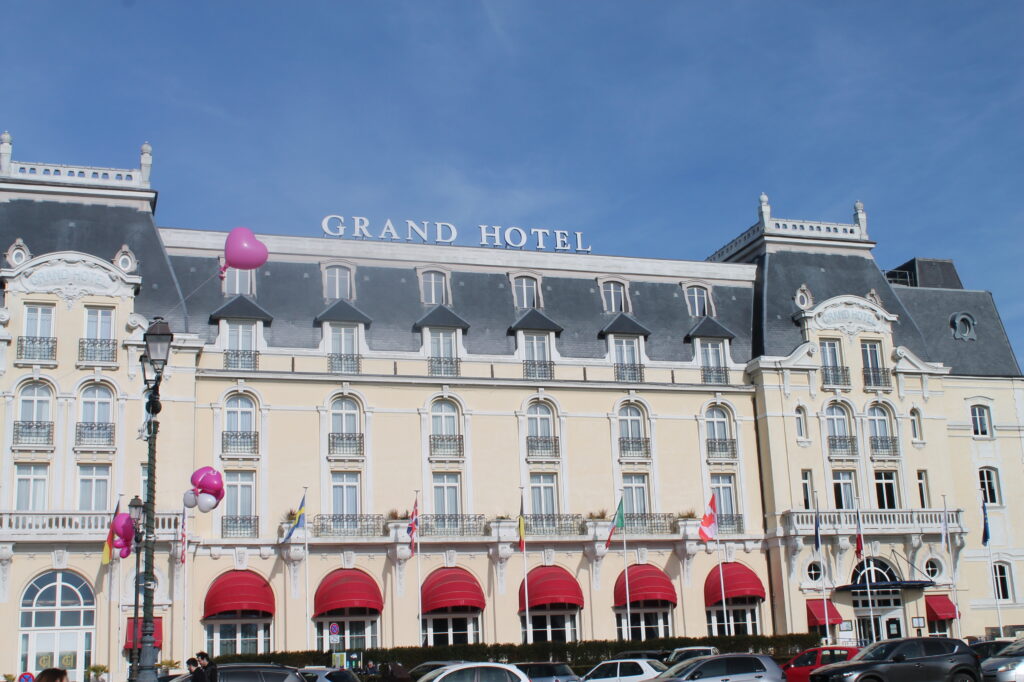 I’ve come to appreciate the remarkable sense of continuity one experiences in France: From the joys of sharing inexpressibly wonderful food and wine with friends, to awe-inspiring forward-thinking innovations, such as the invention of cinema. And, of course, the way the past comes alive when strolling down so many timeless streets.

Today, France has been jolted back to a very dark time in its past, when a bloody war of expansion was raged by a land-grabbing despot. I cannot overstate what I understand to be the sense of shock, anger, and the complete solidarity the French seem to feel for a fellow European nation under attack, and just fifteen hundred miles away. Imagine the dread and disbelief that would be felt in Miami if New York (about the same distance from France as Kyiv) were under a full military assault? Actually, we don’t need to imagine it. We were attacked, on September eleventh, 2001, for the first time since Pearl Harbor, the latter of which brought America into World War II.

The terrors and pain of occupation during World War II are not forgotten in France. There are reminders everywhere. If you’ve ever traveled to France, you may have noticed some of the two hundred commemorative plaques on facades throughout Paris to those killed or deported, occasionally with flowers recently placed, as if on a grave.  Many of these memorials are on walls still pocked with the high caliber bullet holes from the battle to liberate Paris in the summer of 1944.  Like the one on Place Saint Michel that commemorates a twenty-four year old Jean Montvallier-Boulogne, who was killed fighting on that street on August 25, 1944. 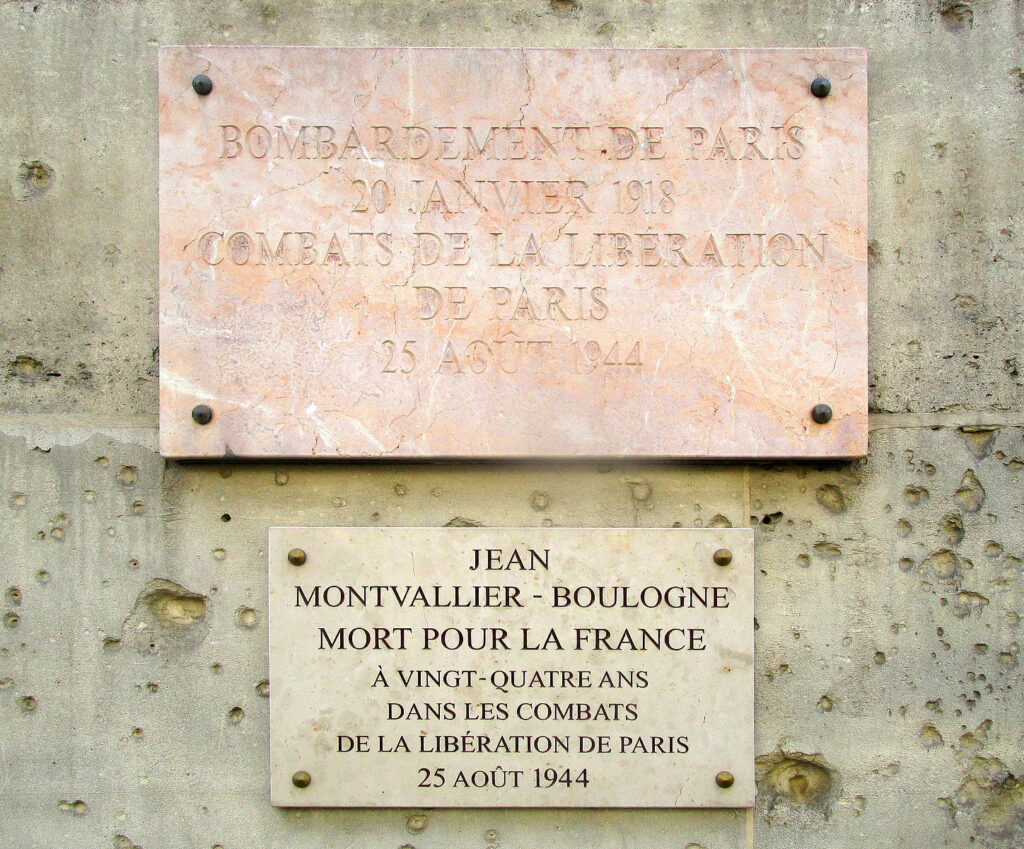 These distant collective memories are now reemerging with the invasion of Ukraine.  The  remembrance of war is also omnipresent in Normandy– the history of D-Day is steeped in the soil there.  The ruins of German defense bunkers, and the graves of nearly ten thousand American soldiers who died liberating France, are constant reminders of the past subjugation of the nation, and the continent.

Standing on line at the Dives Medieval Halles market Saturday morning, I asked some of the locals for their thoughts about the invasion of Ukraine.  Behind me was Andre (60 +) with his wife. he said,  “We are Poles who settled in France 40 years ago, so we know the Russians better than other French…  There is enormous risk that this conflict can spread throughout Europe.”   In front of me, Quentin (27) shared, “For me, we don’t attack a sovereign country, I am firmly against Putin and stand with Ukraine and hope Europe will elevate the sanctions to the maximum. It resonates here, after all, it wasn’t so very long ago, in the last century. And when we see that in 2022, It is sad and very frightening.” 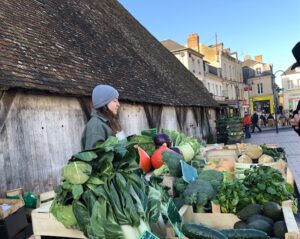 On Sunday night, I got a ride back home to an overcast Paris.  I usually love such days in Paris, but presently it mirrors an oppressive and profound sadness I feel all around me. I’ve remained glued to my screen, while I follow, in utter disbelief, the heartbreaking images of the horror– and also the uplifting images of the boundless courage of the Ukrainian people.  I was heartened to see my old colleague, Chef José Andrés, tweeting from the Polish border, where he is mobilizing his World Central Kitchen to feed fleeing refuges as well as many stuck in Ukraine.

As a friend said to me this morning, “Europe is broken, it will not be the same as it was.”  I’d like to believe that an alliance of the righteous will keep Europe whole, and ultimately safe.  Russia’s  geo-political gamble is to roll back the clock to a time when nations did not abide by any rules, where might made right and the strong vanquished and subjugated the weaker because they simply wanted to take what they could.

I applaud the European Union’s quick decision to move Ukraine’s request for admittance to the fast track. The massive show of support as millions take to the streets around the world is encouraging.  But all the while, the suffering of people of all ages, of animals, and of a culture being effaced is heartbreaking.

It is said that Proust, saddened and outraged by the death and destruction during World War I, read seven newspapers a day to follow the progress of the war. One hundred years after his death, in 1922, we follow, once again, heinous acts of a war on a sovereign nation in very real time.  In every time zone, the clock is ticking, every second matters. It is hard not to feel that time is being lost.

There are a number of organizations that one can donate to, here are two that I recommend: