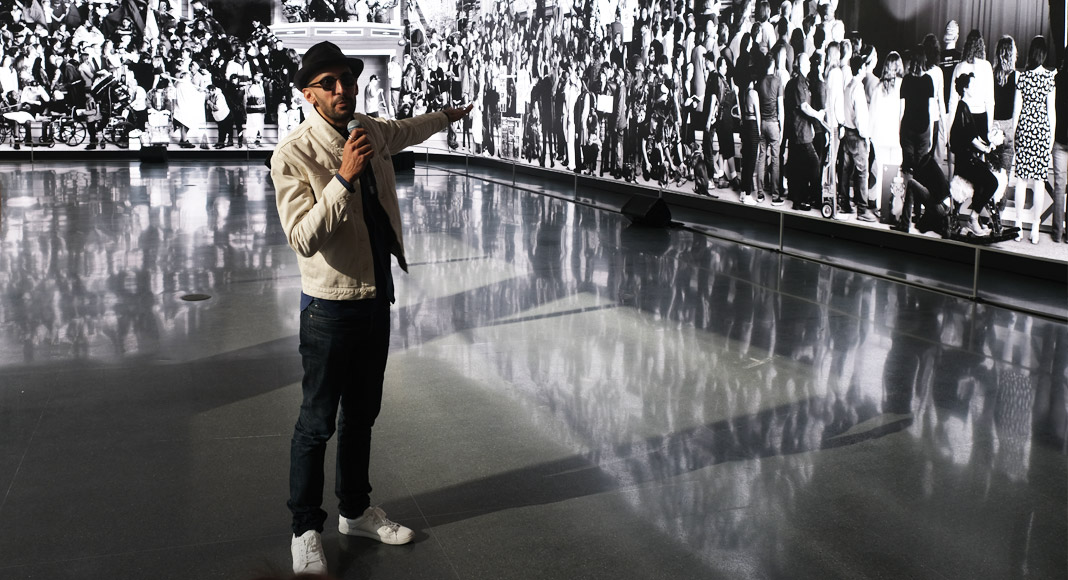 JR’s Exhibit ‘The Chronicles of San Francisco’ Debuts at SFMOMA

JR, an internationally renowned French “photograffeur,” as he calls himself, inaugurated his first large-scale digital installation at the Museum of Modern Art in San Francisco, SFMOMA, on Thursday, May 23rd.

“The Chronicles of San Francisco” features a giant digital mural. “This is the first time I’ve ever created a mural on a city scale,” says JR. This video masterpiece of nearly 30 meters in length brings together hundreds of the city’s inhabitants, photographed and filmed by the artist in San Francisco. Celebrities, strangers, homeless people, athletes, children, musicians, drag queens, men, women… so many San Franciscans who are at the heart of the city.

This work of art — on display for one year in the Roberts Family Gallery (the free part of the museum) — is the result of work begun in 2018. For two months, JR traveled around San Francisco in a truck transformed into a photo studio. He set up his lenses and cameras with the desire to capture the multi-faceted soul of the city. To reflect its diversity and paradoxes: “It is a city rich in contrasts, between cutting-edge innovations and the highest rate of homeless children in the country. I felt a real freedom and vitality, ideal backdrops for my project,” he explains.

His idea: to create an image of society “neither good nor bad,” just a mirror of the current events of an era. More than 1,200 people were photographed and answered his questions. The final mural projected at SFMOMA is only a portion of his project. It’s a meticulous assembly of his work. “Everyone is the same size. No one is more important. What matters is what everyone expresses in their representation,” says JR. Neal Benezra, the curator of the exhibition, adds: “It is a spectacle of the people, a panoramic mural of the characteristics of our extraordinary city.”

In addition to the digital mural, kiosks allow you to listen to the interviews of each of the people represented. Through this interactive installation, JR explores the city in the tradition of the engaging mural paintings of Diego Rivera, a famous Mexican painter. “We have rebuilt society, from the poorest to the richest. It is an inclusive work that has the same power as Diego Rivera’s murals, but adapted to today!” explains JR. The concept appeals to Neal Benezra himself: “JR’s project is part of this tradition of democratic paintings, made for the public. He brings street art to the museum, we are proud to welcome him!”

JR’s vision is all there: to make art visible to everyone, the community at the center of his inspiration, and the human being at the heart of his work. Born in France in 1983, JR became known for his tags on Parisian buildings, then famous for installing large-scale photo collages all over the world and works such as Les Bosquets (mixing dance, music and photos in a Paris suburb). Nominated for an Oscar in 2018 for his documentary Faces, Places (co-directed with Agnès Varda), he was cited by Time as one of the 100 most influential people in 2018. His “Chronicles of San Francisco” are a must.