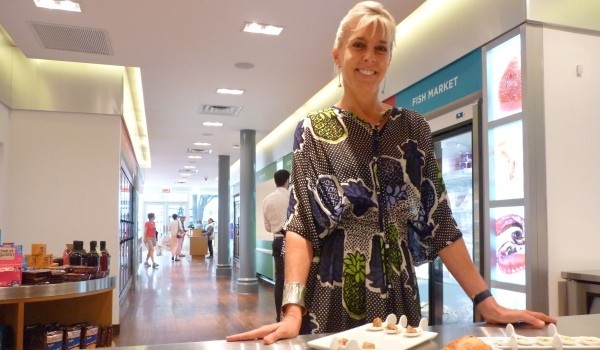 French residents of the Upper East Side are completely beside themselves. In case the arrival of a second Maison Kayser wasn’t exciting enough, the eagerly awaited Babeth’s Feast, a frozen foods store akin to the revered French supermarket “Picard Surgelés”, has arrived on the scene.

Let’s not get carried away here however. “We aren’t Picard” said Elisabeth de Kergorlay, the founder of the Babeth’s Feast, keen to reinforce the individuality of their brand. “We don’t want for our clients to be asking us where to find the “Salmon Tartare” that they are used to finding in Picard stores in France, we are an American company.”

The long and luminous store, which opened on the 6th of August can be found on 3rd avenue between 80th and 81st street. Fitted with a Kitchen in the rear which is used as a display and demonstration space, Babeth’s Feast offers a range of typically French frozen products (gratin dauphinois, salty crumbles, baguettes…) alongside American options such as mac & cheese or flatbread. “My catch-all phrase is that we are French-inspired but not French-imposing,” says Mrs de Kergorlay.

She is also all too aware that she is targeting a difficult market. Even though the United States is the largest market for frozen foods, it suffers from a “junk food” image. Babeth’s Feast is also up against an inexpensive and speedy home delivery market.

From trade shows to factory visits, Elisabeth de Kergorlay has traveled far and wide to reach this point. “When I was young, I never thought I’d be doing this one day” admits the entrepreneur who once invested in the Pain Quotidien.

“Having a store was necessary in order to show, touch and taste our products” adds Olivier Arizzi, the store manager who has been part of the journey for two years now. A second store is also being thought up. In the meantime, for frozen food enthusiasts who aren’t local to the Upper East Side, ordering online is an option with deliveries available Monday through Wednesday.

“I am very happy”  admits a smiling Elisabeth de Kergorlay in front of a plate of pains au chocolat about to be put in the oven. “I should walk around with a notepad at all times because the feedback is constant. We don’t yet know which of our products will be most successful”