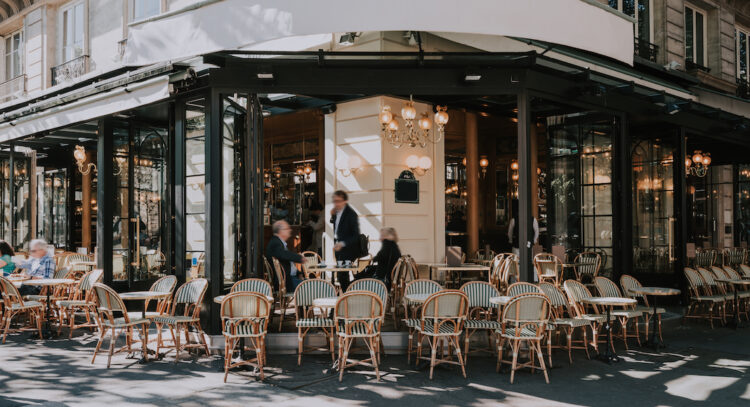 For a lot of us Joe Schmoes out there, a morning (or afternoon) coffee is more than a ritual—it’s a lifeline. When traveling, a cup of coffee can be the difference between having a friendship-ending blowout or an energized, picture-perfect adventure. It can give you the confidence to say things like, “Sure, we can climb the Eiffel Tower,” or, “Maybe that waitress was pointing and laughing at someone else!”

But differences in coffee culture are far from small beans. As an American visiting France, you should know how to order a coffee, what to expect when you get it, and how to avoid becoming the kind of obnoxious tourist you mock back home.

In France, waiters don’t wait on you—you wait for them. Mentally prepare yourself for a long stay if you’re planning on sitting at a table. French servers take their time, and if you try too aggressively to flag one down, you’ll be perceived as being rude. The pace of life is slower in France, and adjusting your expectations of customer service will prevent you from experiencing a lot of frustration. 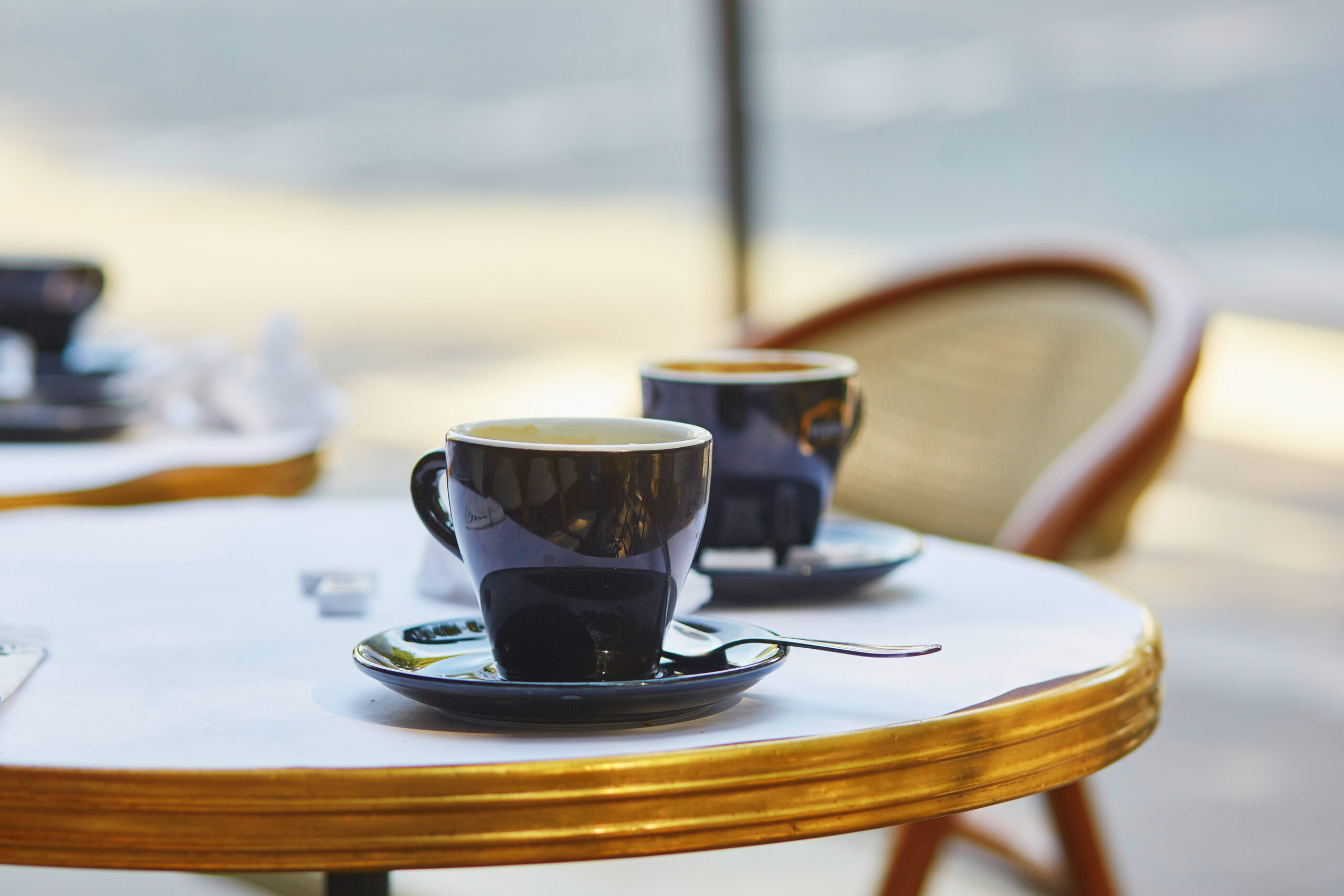 One of the best-kept secrets of the French cafe is that locals usually take coffee standing at the bar, and for good reason: it’s half the price you’d pay sitting on the terrace. This rule applies only to classic, old school French cafes that have a visible bar in the center of the room. Because Europeans will do anything to sit outside, even in the dead of winter, it’s common to see the terrace packed, but the interior of a cafe completely deserted. Simply walk inside and ask if you can take a coffee at the bar. (The classic way to say this is “au zinc” or “sur le zinc,” referring to the traditional zinc bar tops, but “au bar” is more than sufficient.) You might see older French people reading the paper or chatting with the barista, and that’s how you know you’re in the right place. It’s not ideal if you’re tired from walking all over town and want to sit for a while, but if you’re just looking for an expedited way to start your morning, it’ll do the trick.

Though less so than it used to be, cash is still king in France, particularly for small sums. Since a coffee will likely cost you only a couple euros, make sure to have change, or “les espèces,” on hand. Exact change is particularly appreciated. If you’ve spent more than ten or twenty euros, you can ask to pay by “carte bleue,” or credit card, but if your bill is €5 you might be asked if you’re certain you don’t have any cash. Leaving a tip, or “pourboire,” isn’t expected in France, and isn’t based on a percentage. If you really feel that service has been phenomenal, you can leave an extra euro or two in cash with the bill.

If you’re only ordering a coffee on the terrace, the server might bring you your bill with the coffee, or shortly thereafter. If you have exact change, you can leave it with the bill and depart as you like—no need to flag down the waiter. If they bring you a check, but you decide you want another coffee later, don’t worry. Rather than update your bill, they’ll just bring you a second one for your second order. Don’t misinterpret either bill as an indication they want you to leave… unlike in the U.S., in France you can linger over a coffee for as long as you want, and no one will rush you out.

If you order “un café” in France, you will get an espresso. For an American-style coffee, you’ll have to check to see if the menu offers “un café filtre,” or coffee made with a French press (“cafetière” in French). If they don’t, you can order “un café allongé,” what we would call an Americano, which is espresso with hot water added to make it longer and more diluted. For coffee with foamed milk, you can order “un café crème,” “un cappuccino,” or “un latte.” If you see “un noisette,” don’t mistake this for hazelnut-flavored coffee, though “noisette” does mean “hazelnut” in French. This refers to an espresso topped with a nut-sized drop of milk, which gives the beverage a hazelnut color. Don’t even think about trying to order an iced coffee or an oat milk latte—this is not the place. 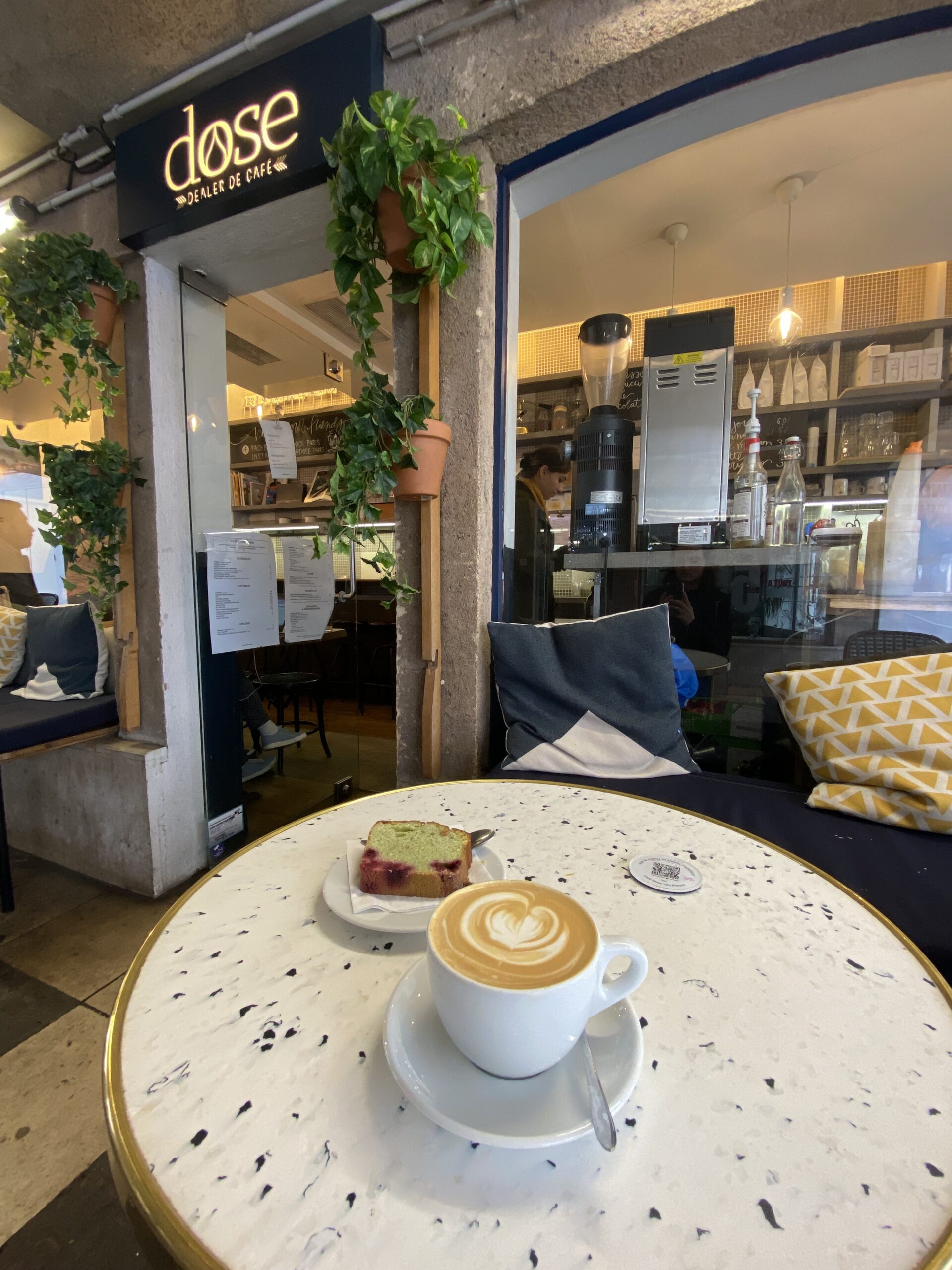 While France is known for its cafe culture, it’s not exactly known for its coffee. French coffee is famously bad, thanks to the domination of industrial coffee distributors which have kept a chokehold on the market. (Another theory is that the French got used to the harsh flavor of coffee beans that were imported, duty-free, from French colonies in the early 20th century.) If you want quality beans, or an iced oat milk latte, you’ll have to head to a third wave coffee shop like Coutume or Ten Belles in Paris. Most of these places are Australian- or American-owned, and you’re safe ordering in English. They’re easier to find in younger and more international neighborhoods or cities, and the clientele will skew towards students and Anglophones.

Je voudrais prendre un café sur la terrasse. = I would like to take a coffee on the terrace.

Je voudrais prendre un café au bar. = I would like to take a coffee at the bar.

Merci! = Thank you! (Always say thank you, even if your server took half an hour to bring you the check…and smile, it’ll do everyone good.)