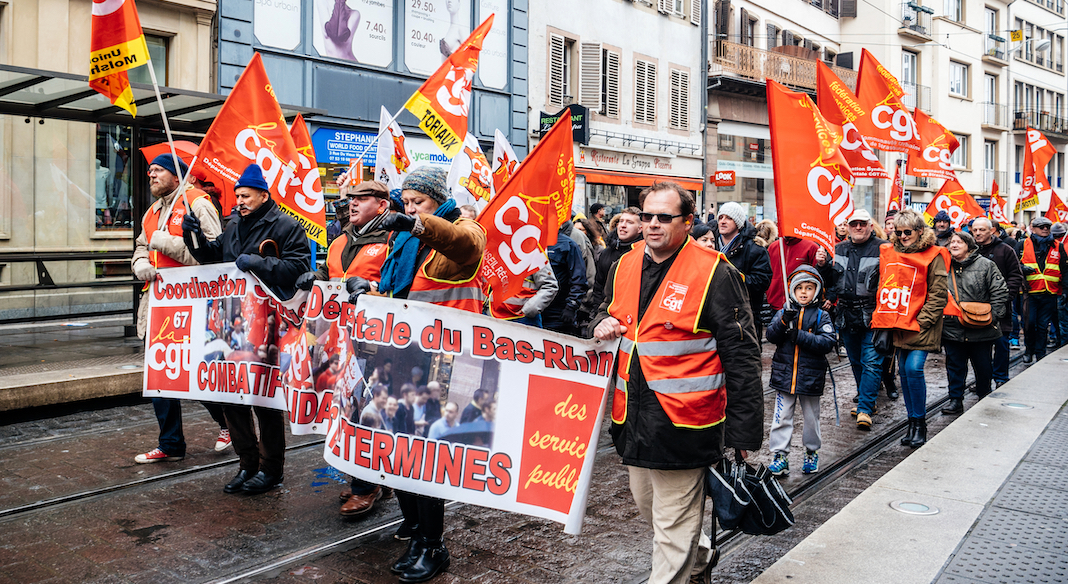 Strikes in France vs. in the U.S., a Comparison

Strikes: French unions love them, and whenever they happen they give the United States an air of holiness. Strikes are used on both sides of the Atlantic to put pressure on employers or the government. But are American workers as reluctant to go on strike as they are said to be? Here’s an overview of the situation.

Americans do strike, and more and more often.

The French are tempted to think that Americans never go on strike and do not unionize. That’s not true. Unionization rates are comparable in both countries, both around 11%, down sharply since the end of World War II. The same goes for number of strikes, too. Encouraged by the good health of the economy and their good image in the public eye, American trade unions are making increasing use of them. In 2018, there were twenty “work disruptions” (strikes and temporary closures of companies by management in anticipation of a strike) involving more than 1,000 people, compared to just seven in 2017, according to the Bureau of Labor Statistics. A record since 1987. In total, in 2018 strikes in the United States affected some 485,000 workers. This threshold is expected to be exceeded in 2019. This year’s social news was marked in particular by the strike of the 50,000 employees of the automotive giant General Motors. It had been twelve years since the company had experienced a movement of this magnitude.

The American public service is more unionized, but….

And that’s normal. As the Pew Research Center notes, only eleven states formally recognize the right of civil servants to strike: “In the other 39, public sector strikes are illegal, even if they occur occasionally. Concerns over strikes have long been used to discourage public servants from forming unions and obtaining collective bargaining rights.” According to Pew, these restrictions stem in particular from the 1919 strike by the Boston police, whose decision to stop working in protest of a ban on union membership caused an increase in crime in the city. Ronald Reagan mentioned this episode when he crushed the beginnings of a strike movement by more than 11,000 air traffic controllers in 1981.

The feeling of being “taken hostage” in France

In a centralized country like France, general strike movements in the public sector (teachers, transport workers, etc.), such as those we have seen since December 5 over pension reform, have a stronger disruptive power than in the United States, where strikes do not paralyze the country. While general strikes broke out in several American cities at the beginning of the 20th century, including Seattle in 1919, they gradually disappeared from the landscape due to restrictions adopted in the 1940s, according to The Nation.

Another factor that hinders the strike force of American trade unions is that they are organized mostly within a company and negotiate only within that company and not at the level of an industry sector (actors and writers are the exception, as anyone who watched TV in late 2007-early 2008 will remember). This system leads company heads to use ingenious techniques to discourage employees from joining a trade union or even to prevent their creation. Vox explains that “most European countries, and some other rich countries outside the US, have figured out an ingenious way around this. Unions there bargain not at the company level but at the sector level — negotiating for all workers in an entire industry rather than just one company or workplace. … Because every company, no matter how many of its employees are in a union, has to abide by the same pay and benefit deal, companies have less incentive to discourage union membership.”