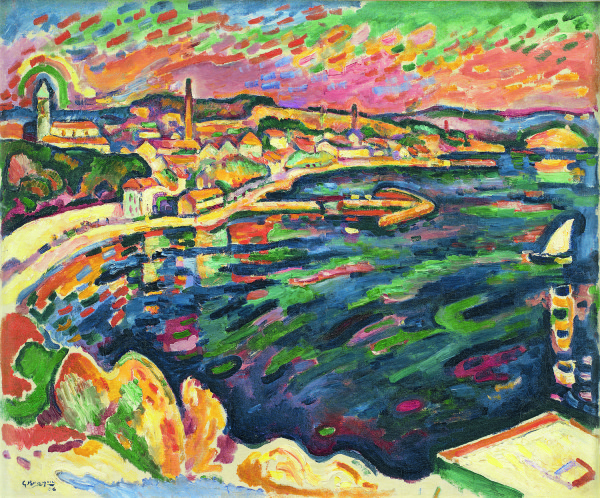 Art lovers who think they know everything about the ground-breaking painter Georges Braque (1882–1963) should be thrilled by an illuminating retrospective of his work now at The Grand Palais through January 6, and continuing at the Museum of Fine Arts, Houston, February 16-May 11, 2014. Comprised of more than 230 works by the artist, the exhibit covers Braque’s little-known fascination with the music of Erik Satie and with the writings of the period’s poets and intellectuals. To that end, original documents and photographs, including shots by Man Ray and Henri Cartier-Bresson are also on display.

“The Grand Palais’ Georges Braque is the first retrospective of the artist for 40 years and is unlikely to be surpassed,” wrote critic Jackie Wullschlager in Financial Times. “It offers perfect-pitch insight into Braque as the quintessential French painter, both heir to the classical tradition and precursor of postwar abstraction, and an artist whose inventive power was matched among his contemporaries only by Matisse and Picasso. With this show, Braque, third man of modernism, comes into his own.”

Displayed over two floors, the exhibition opens with the artist’s early Fauvist paintings, like the vibrant landscape “Le Port de l’Estaque” (1906), before transitioning to works in the style Braque is primarily known for, cubism. Braque’s paintings are famously credited with inspiring the name cubism when an art critic described one work as being “full of little cubes.” An apocryphal anecdote included in the exhibition catalogue testifies to Braque’s importance to the movement. When war broke out in 1914, the artist enlisted at once and left for the front. When his wife, Marcelle, was arrested as a spy, an officer asked her, “What is your husband’s profession?” She replied, “He is a painter.” He then corrected her saying, “No Madame; he is a cubist!”

But though the style is amply represented here, the retrospective also counters the idea that cubism defines Braque. With his contemporaries, Braque pioneered other techniques, such as pasting paper onto canvas to create collages, represented her with paintings like “Compotier et verre” (1912). The still lifes that Braque began painting in the 1920s are also on display with canvases featuring fruit, flowers, violins, pitchers and billiard tables, and emphasizing their lyricism and architectural shapes.

During World War II and Braque’s self-imposed exile at Varengeville-sur-Mer during the Nazi occupation, his works became literally and figuratively darker. Two examples are “Les poissons noirs” (1942), a fish still life that conveys the hardships of the time, and the despairing “La Poêle” (1942-43), depicting a stove with empty coal bucket alongside a skull-shaped palette. Braque’s poetic sensibility returns in the final gallery, which is filled with nine paintings of his studio from 1949 to 1956 and his bird paintings, including one of his last — the sensuous and strikingly simple “L’oiseau noir et l’oiseau blanc” (1960).

Documentation throughout the exhibit reveals that Braque was not only daringly modern in his experiments with viewpoint and materials, but that he enjoyed his success in much the same way as many high profile artists do today. “Do you realize, we each have a car, and a chauffeur!” he bragged to his friend Picasso. It is nice to think of this modern pioneer being driven around Paris, like a pop star of his day. As this show amply proves, he worked hard to earn his place in the artistic firmament.