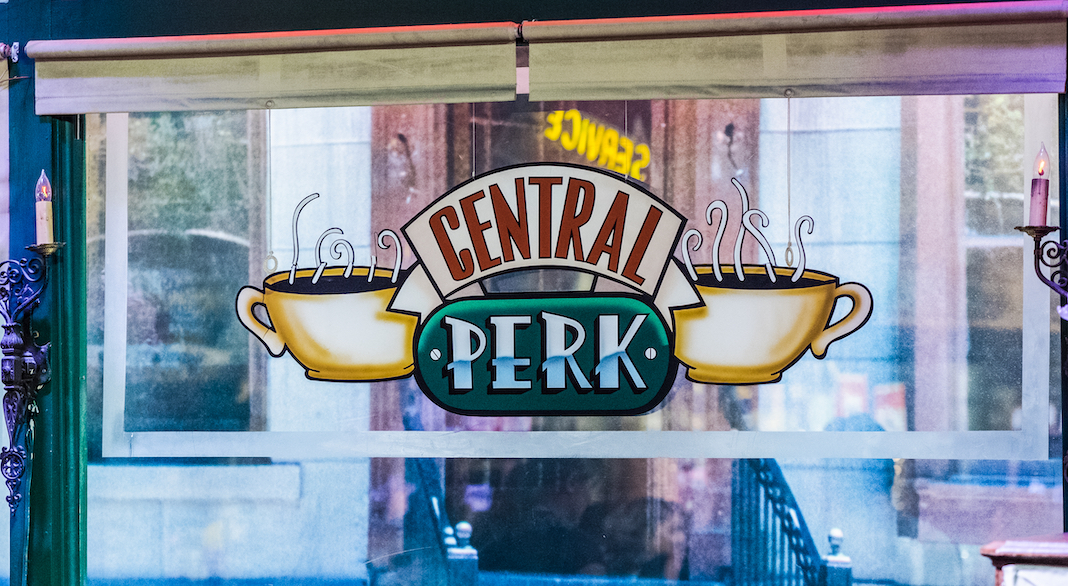 Why Does France Love ‘Friends’ So Much?

Friends has been a cultural phenomenon in France since it first aired 25 years ago. In 1997, Friends gathered 1.4 million viewers on France 2 every Wednesday at 6:30 p.m. Today, the series is recommended by foreign language education companies to help the French to learn American idioms, though those same French students probably already know the title song “I’ll Be There For You“ by heart.

In honor of Friends‘ 25th anniversary this year, a replica of the emblematic Central Perk couch has been moved around different French cities like Paris and Lyon for people to take pictures with. The sofa was also visible two weeks ago at the 2019 Comic Con Paris where a conference was held on the sweeping success of the show internationally and more specifically in France. On December 6, screenings of twelve Friends episodes are planned in theaters nationally for the first time ever in France. So what happened? Why has France felt so emotionally tied to Friends for so long?

Friends depicts the most ideal version of the American dream in the French mind. The French idealize and have a special affection for New York City, which is where the story takes place. Even though the series was mostly shot in Burbank, CA, Manhattan, Central Perk, skyscrapers, night lights, the skyline, yellow taxis and police sirens build up such different imagery from their usual calmer surroundings that the fast pace and apparent modernity of the city left them starry-eyed.

The French also find the all-out, go-big-or-go-home nature of the American way of life fascinating, which appears a lot in the show through events like Christmas, weddings or baby showers. Except for at Disneyland Paris, the month-long Halloween celebration isn’t really a thing, and the French obviously do not celebrate Thanksgiving either. Taking place during this national holiday, The One With The Football stands out in the top ten best episodes of the whole series, according to Le Point’s ranking of every episode of the series. In fact, Le Point’s top ten episodes include two Thanksgiving episodes, one Valentine’s Day episode, and a wedding episode.

The economic aspect of the American dream that is presented in the series is also of interest to the French. For example, Rachel lands a fancy position at Ralph Lauren only several months after quickly getting a job as not-the-best-waitress-ever at Central Perk. Then, though the late-twentysomething adults are just starting off in life, they can afford to live in big, beautiful apartments in Manhattan while seeming to have a lot of free time and not struggle with rent payments.

Friends makes up for a lack of a comparable high-quality French TV show depicting the lives of a group of young adults navigating the world together. Starting from the pilot where Rachel leaves her fiancé at the altar, the story always deals with the complexities of universal human topics that the French can easily identify with: friendships, family relationships, dating, love, careers, marriage, having children, the meaning of life, death…

France just doesn’t have an equally superbly written and acted TV series earning bursts of laughter from its live audience. In 2018, the well-known French show Plan Coeur [The Hook Up Plan] was released on Netflix. Similarly, it tells the story of a group of twentysomethings navigating life in a major city, but it’s been criticized for its overall unrealistic writing and poor acting throughout the broadcast of its two seasons.

Contrary to what you’d imagine, the tech-free aspect — which could’ve seemed outdated — actually seems to contribute to the show’s staying power. No comparably successful French sitcom can reflect such an interesting sociological documentation of the screen-free era when virtual relationships didn’t exist and human connections were only made face to face. The series Hélène et les Garçons [Helen and the Boys] aired on French TV from 1992 to 1994. Though it also recounted the lives of a group of similarly-aged friends, it’s not being watched by the younger generation, perhaps because it’s perceived as having an overall lack of authenticity as well.

In other words, the Friends “filled-with-love-and-laughter” cocktail — a mix of intriguing aspects of American culture, themes that translate into any language and relate to any culture, and solid writing and acting — definitely resulted in the best recipe for success in France. Since its inception, Friends has never had to face a French counterpart nearly as strong. As long as the show is so great and there’s nothing else as good on the market, the love of Friends is sure to endure.