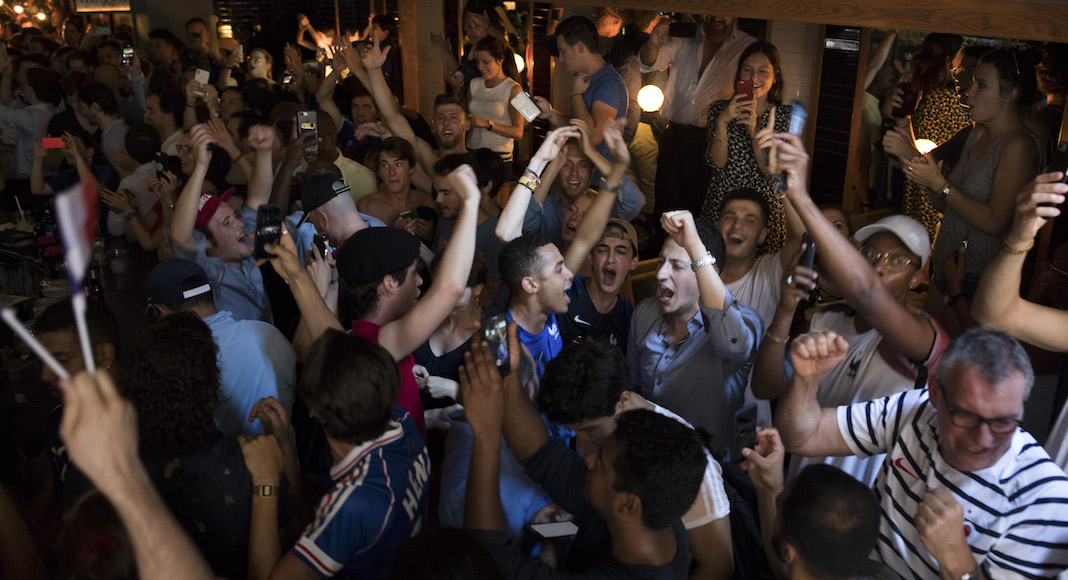 Why Do the French Sing “I Will Survive” at Soccer Games?

“At first I was afraid, I was petrified / Kept thinking I could never live without you by my side / But then I spent so many nights thinking how you did me wrong / And I grew strong / And I learned how to get along / And so you’re back / From outer space…”

You’ve probably heard this Gloria Gaynor song. At parties, in movies, at Pride events… and at France’s soccer matches. If Team France wins, expect to hear “I Will Survive” played on the speakers. Or before the match even begins, fans in the stadium might break into a chant of “la la la la la” in the same disco rhythm of the song. It’s iconic for France.

When France beat Belgium 1-0 on Tuesday, securing their place in the World Cup final on Sunday, the nation sang “I Will Survive,” and broke into chants of “la la la la la.”

So how did this American disco song become the anthem of the French soccer team?

It goes back to 1998, when France famously won the World Cup in Paris, beating Brazil 3-0 in the finals. The nation was praising the “black-blanc-beur” (black-white-arab) team for healing racial divisions in the country, and everyone worshipped “Zizou” (Zinédine Zidane) who had scored two goals. in the final The players were kings, for they had been the ones to bring France its World Cup glory.

And what song were those kings rocking out to after they won game after game on the road to victory? “I Will Survive.” Make no mistake, though Gloria Gaynor debuted the song in 1978, the French team was not singing her song. It was the 1994 remix of “I Will Survive” by the Dutch pop group Hermes House Band, released in 1996 in France, that brought Les Bleus, and later the nation, to its feet.

The team was introduced to the song before the tournament had even begun. Vincent Candela, a defender on the 1998 French World Cup squad, was obsessed with Hermes House Band’s remix. He listened to it on his walkman all the time. (He claimed in a 2016 interview to be the player on the team the most tuned-in to new music.) He introduced the song to the team, but it didn’t immediately become their on-repeat anthem.

As for when the team grew to love the song, “we were playing a game of keep-away,” recounts Candela, and “[Alain] Boghossian was in the middle and he hadn’t been able to steal the ball away. After a while, we started singing ‘la la la la la,'” from Hermes House Band’s “I Will Survive” remix.

It was in moments like that during the game of keep-away that the song began to become a part of the team; “little by little, during practice, on the field,” and then later, “after a goal or a win, we’d sing “la la la la la,” explained Candela.

As the team’s manager Henri Émile recounts in the soccer documentary “Les Yeux dans les Bleus,” it was after the first game against South Africa that it actually became an anthem.

The French team’s locker room was next to South Africa’s locker room. Before the match, the South African team was singing and, thanks to thin walls, the French team heard them, loud and clear. After the match, the French team having won 3-0, they wanted to sing. The French players Emmanuel Petit and Frank Leboeuf tried to get an African-inspired rhythm going, but the team started singing “la la la la la” (from the Hermes House Band remix) and it turned into a sort of chant. (It’s worth nothing that according to other sources, Candela actually played the song in the locker room to celebrate the win. One or both of these stories could be true but, regardless, it was after that win that the song became a true team anthem.)

From then on, the song was integral for the team. As often happens with sports, there were some superstitions, and playing “I Will Survive” before each game became one of the team’s superstitious rituals. (Other 1998 Cup superstitions include defender Laurent Blanc kissing goalie Fabien Barthez’s head before kick-off, and the players sitting in the same seats on the bus.) Candela gives credit to the team for bringing the song to the public: “I introduced the team to the music, but it was everyone that brought it to the field!”

The general public, following the lead of their superstars, adopted it as the country’s anthem. When France cinched the win over Brazil to take the Cup on July 12, the whole nation was prepared to sing “la la la la la” along with their victors.

Gloria Gaynor’s story is slightly different. According to Gaynor, the team was in the middle of losing a match and someone blamed it on not having an anthem. One of the players said that their song was “I Will Survive,” and together “they began to sing ‘I Will Survive’ and it spurred them on to victory.”

Despite preferring the Hermes House Band’s remix, it was Gaynor that the team contacted and dubbed the godmother of the team, inviting her to France to meet them on January 20, 1999, and perform her own remix of “I Will Survive” before a match against Morocco (hear it in the video above). A few years later, she gave Candela one of her gold albums. Funnily enough, Candela told L’Equipe that he didn’t know the song was Hermes House Band’s remix, he thought it was Gloria Gaynor’s original song.

As for why the song has survived as an anthem all these years, consider the fact that this is the anthem of the team that won France’s only World Cup title. It’s the anthem of a World Cup winning team, therefore, it’s a winning anthem.

Beyond that, it’s logical that the “la la la la la” part would become the most well known and often chanted part of the song. “I Will Survive” is a long song to be a victory song, and a difficult one for a country that’s known for being weak in English. “La” is a French sound and works well as a chant. You don’t have to memorize multiple verses (like with 1986’s “Viva les Bleus“) or get overly dramatic (like with Johnny Hallyday’s “Tous Ensemble” in 2002). “La la la la la” is easy to remember, easy to yell, and everyone knows what it means: French soccer is king.