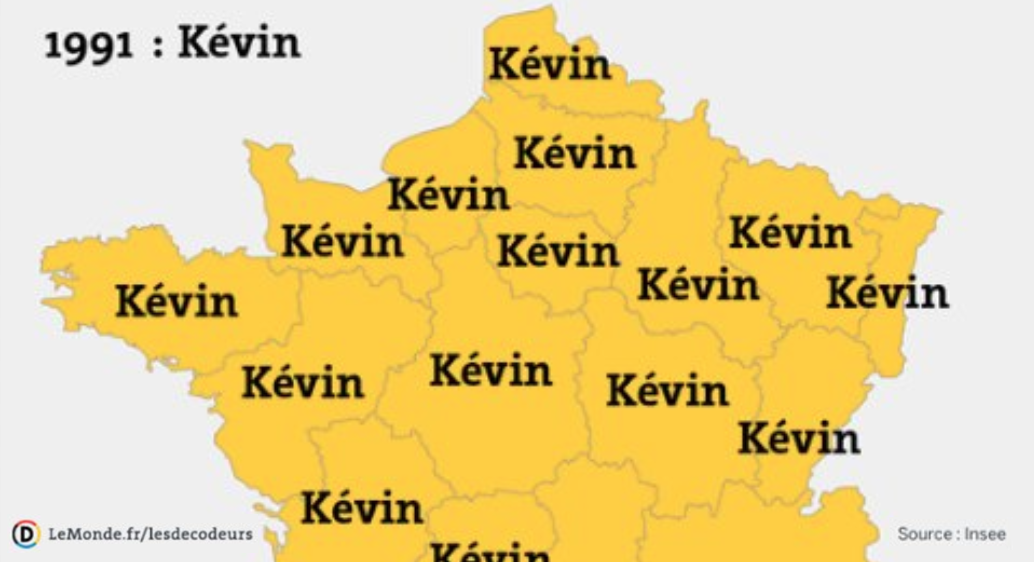 Americans can call their children practically anything they want. Beyoncé and Jay-Z’s daughter is named Blue Ivy. Kim Kardashian and Kanye West’s little girl is North (North West, get it?). And Frank Zappa’s kids are Moon Unit, Dweezil, and Diva Muffin. Unusual names are not just for the offspring of celebrities. People have actually named their kids Cheese, Fairy, and Jag.

This is not the case in France, where courts can reject a name if it is not in the best interest of the child. So can a French couple call their child Manhattan? How about Mini Cooper? Or Nutella? Non, non, and non. French courts have rejected those names and more.

The restrictions go back centuries, to the 1803 law limiting names to those of Catholic saints and “important people of the ancient world.” That meant a lot of Jeans, Michels and Valéries — no Kevins allowed.

The law was in effect until well into the 20th century, and there was actually an official list of acceptable names. Want to call your baby Clotilde or Gaston? Pas de problème. How about James or Lola? Excuse me, Madame, but you are in France!

Over the years, new names snuck in that weren’t on the official list. The French Justice Department recognized this reality in 1966 by allowing additional names, like regional names and those taken from mythology. In 1981, the French Court of Appeals went further, giving the green light to virtually any name as long as it was not “considered ridiculous.” But the 1803 law was still on the books and it remained there until finally being amended in January 1993. At that point it became legal for parents to give any name as long as it was not “contrary to the interests of the child.”

So what happens if French parents give their baby an unusual name?

First, the child is registered at city hall, as all children are. If the city clerk likes the name, fine. If not, the clerk can demand that it be changed. Refusal means a day in court, where a judge rules on the admissibility of the name. If the judge decides against the parents, they must choose an acceptable name or the court itself will name the child. Thus, when the parents of baby “Nutella” didn’t show up for their court date, the judge named their child Ella instead.

For the most part, this has not opened the floodgates to crazy new names. Most French names are still very traditional, like Louise and Gabriel, the most popular girl and boy names in 2017. But foreign names, especially English ones, have made inroads.

It started with Sabrina and Anthony, which in the early 80’s became the first “foreign” names to hit the Top 10 baby name list. But it was Kevin that really made its mark.

The name rocketed to the top of the charts in the 1980s, buoyed by the success of Home Alone and its hero Kevin McCallister, as well as Kevin Costner in Dances with Wolves. Kevin was France’s most popular boy’s name for six straight years, from 1989 to 1994.

But fads come and go, and today the name has taken on a tacky connotation. To call someone “a Kevin” is an insult, implying low intelligence — Kevins are considered candidates for printer salesman or convenience store manager but not professor or corporate executive.

So if you want your child to one day join the French élite, be advised to stick with traditional names.

Pro tip: Looking for a baby name? “Brigitte” and “Emmanuel” are so hot right now.